Happy Columbus Day/Canadian Thanksgiving to our North American readers. I have no idea what Post-Columbus Day is called Down Under, but on Tuesday morn Oz time I’ll be Zooming into my chums at Melbourne’s IPA for a special event with the great Jon Roskam. You can find more information about that here. Time-wise that’s midday Tuesday in Sydney, Melbourne and Canberra, 9am in Perth, and somewhere in between for those of you in between. But because Australia is way ahead of us (Victoria’s already in the third year of lockdown psychologically) tomorrow is already here (or there) in the Antipodes. So, if you’d like to check in from the western hemisphere, it’s 9pm tonight North American Eastern Time – or 1am Greenwich Mean Time, for those of you elsewhere on this turbulent earth. But you do have to be an IPA member – which you should be anyway. It will be a lot of fun.

~Elsewhere this promises to be a lively week, starting with the clean-up for Hurricane Delta, which, as Dr Fauci can surely confirm, has blown around a lot of Covid, causing it to swirl about your condo and add you to the soaring number of cases. There is more action to come in the Supreme Court hearings just underway – and more inaction: the canceled Trump/Biden debate that the President is now demanding be rescheduled. Good luck with that.

I said on Rush that we were living in a blizzard of lies, but that expression makes it sound less precisely targeted than it is: With three weeks to go to the laughably misnamed “Election Day”, it’s all hands on deck at the Associated Press. The arbiters of American journalistic practice have decided that the term “court packing” means “depoliticizing” the bench. Gee, how unobjectionable that sounds:

Bullock said that if Coney Barrett was confirmed, he would be open to measures to depoliticize the court, including adding judges to the bench, a practice critics have dubbed packing the courts.

So, by happy coincidence, the AP has now adopted the same position as the Dems: A Republican filling a vacancy on the 150-year-old nine-member bench is, per Joe Biden, “court-packing”. But Democrats adding six leftie judges and making it a fifteen-member bench is “depoliticizing” the court. Orwell that ends well.

~Still, at least the AP is not (yet) actively killing its political opponents. In Colorado the paramilitary wing of the mainstream media is shooting people on the streets. It’s only a few days since Kyle Clark, the news anchor of Channel Nine, was hooting and jeering at those rube viewers in the ‘burbs worried about Denver’s downtown violence:

Shame to think there are people cowering in the suburbs, cleaning their guns, peeking through the blinds wondering if every person of color outside is Antifa. If you’re afraid to come into Denver because of talk radio fear-mongering, you’re missing out on a lot.

If you took the star anchor’s advice to check out the lively Denver scene, I do hope you weren’t shot by Kyle Clark’s murderous colleague Matthew Dolloff. Mr Dolloff is a hardcore leftie #F*ckThePolice #F*ckTrumper, so naturally the NBC affiliate hired him as a “security guard”, gave him a gun, and took him to cover a “Patriot Rally”, where he shot and killed pro-Trump veteran Lee Keltner.

In Colorado employment as a security guard is contingent upon a license. Mr Dolloff did not have one. So, even before he started shooting, the “guard” and 9News were in breach of state law. As the NBC station points out, however, the upside is that their producers and anchors did not actively participate in the killing:

A private security guard, hired by 9NEWS, is being held as a suspect in the deadly shooting. A 9NEWS producer has been released after DPD said it was determined they were not involved in the incident.

So we are not yet in homicidal weather-girl territory. But still: Mainstream media employees are now literally killing Trump supporters. 9News is pioneering the transition from boring old Eyewitness News to the livelier format of Perpetrator News.

~I am generally opposed to the over-credentialization of American life: As I pointed out in After America, in the Fifties one in twenty members of the workforce needed government permission in order to do his job; today it’s one in three. But on balance, if the alternative is Matthew Dolloff, I am in favor of licensing security guards. Katz/CRTV sued me for claiming their own illegal security guard stole my cat tree. They lost on that as on everything else (scroll down to Statement 68). Obviously, by comparison with poor Mr Keltner, I got off lightly. But my abiding memory of that strange time is the sense of the fragility of the thin skein of social norms – and that is certainly my 2020 takeaway too.

~The non-homicidal side of wokeness is, alas, incredibly boring. Even as the hospitality industry collapses around the western world, a new hotel has opened in Washington, DC to “celebrate female empowerment“. Is that what you’re looking for on your next business trip? The hotel restaurant (see top right) is dominated by “a massive pointillist portrait of late Supreme Court justice Ruth Bader Ginsburg that’s made out of 20,000 hand-painted tampons (the release notes organic tampon company CORA donated them all).”

I’m relieved by that parenthesis. Don’t you hate it when you go out for dinner and the floor-to-ceiling portrait of a recently deceased judge is made of non-organic tampons?

Does anyone on the planet still get excited by this butt-numbingly tedious crapola? Is there anything more sleep-inducing than corporate wokeness?

For a start, nothing is so past it as yesterday’s up-to-the-minute. It’s totally transphobic to suggest having a period is anything to do with being a woman: all over America millions of happy, healthy, well-adjusted men have PMMS (pre-male menstrual syndrome), and yet, if they go to dinner at Hotel Zena, they have to be demeaned by old-hat feminists culturally appropriating their organic tampons. Enough with the hate.

~Speaking of cultural appropriation, are there any blacks in #BlackLivesMatter? Last night the Portland mob toppled statues of Theodore Roosevelt and Abraham Lincoln and, very tellingly, smashed up the Oregon Historical Society – because, even more than the Khmer Rouge, they wish to live in a post-historical permanent hyper-present that’s less Year Zero than Day Zero.

The previous night – Saturday – twenty-six “racial justice” crusaders were arrested by what remains of Portland “law” “enforcement”. Here they are: 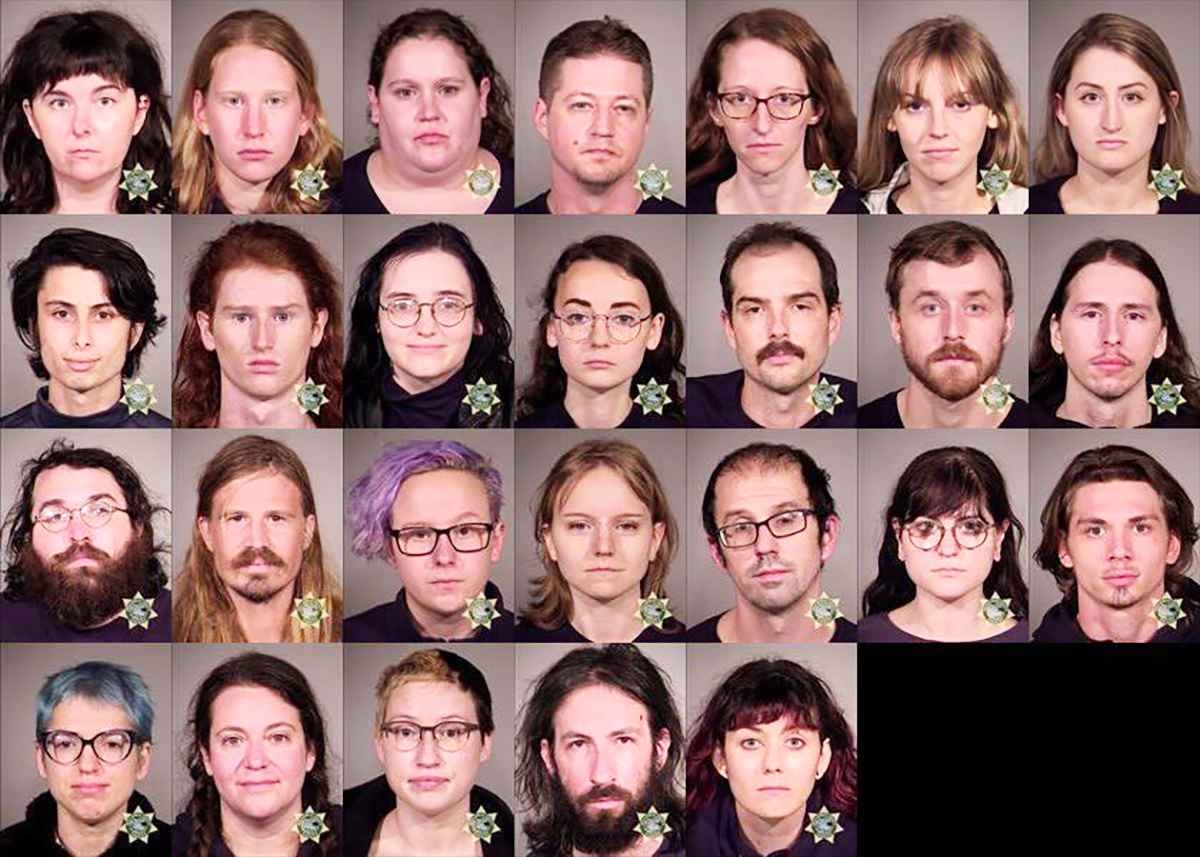 Not a lot of vibrant diversity, is there? The only even theoretical nod to our rich identity-politics mosaic is that it is no longer possible in most of these mug shots to detect which are cis and which are trans – or indeed, in at least ten of the twenty-six, which are male and which are female in any sense.

~It was a very busy weekend at SteynOnline, starting with starting with another go-round of our Clubland Q&A and a splendid hour of questions from Mark Steyn Club members live across the planet. On Saturday an extended edition of The Mark Steyn Show considered the integrity of the American state and why the wider west reacted to China’s provocations as it did. There was also another episode of The Hundred Years Ago Show and a brace of poems for Columbus and 1492. Later I covered for Kathy Shaidle on the movie beat with a centenary appreciation of Walter Matthau. And on Sunday we offered a contrast in musical styles: Tal Bachman’s remembrance of three weeks with Eddie Van Halen, and yours truly on “Georgy Girl“. If you were too busy making a portrait of Amy Coney Barrett in toxic non-organic tampons this weekend, I hope you’ll want to check out one or three of the foregoing as a new week begins.

Going Green and Going Without

The Shame of a Nation