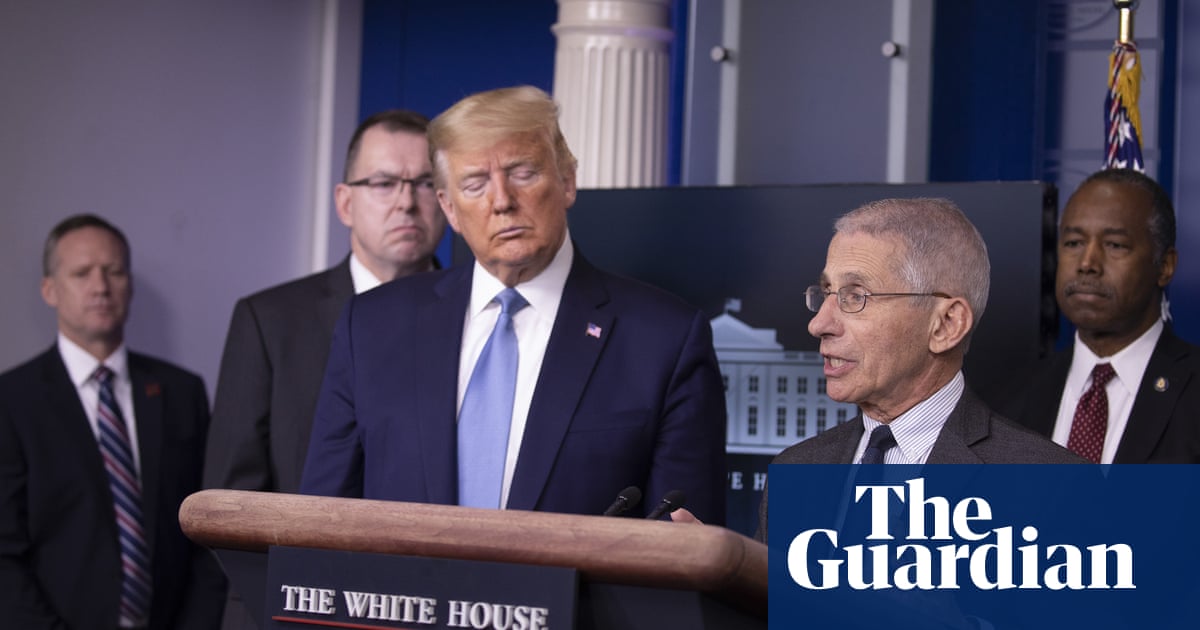 Where was Dr Anthony Fauci, the 79-year-old infectious disease expert who has become a regular fixture and a calming presence alongside the president?

Will the press in the @WhiteHouse briefing room commit malpractice for the second day in a row by not asking the only question that matters:

The alarm reflected just how much the nation has come to rely on the wisdom of the straight-talking doctor from New York as the coronavirus pandemic spreads, with the worst yet to come. For many anxious Americans tuning in from the confinement of their homes, Fauci is a a voice of reason in a time of deep uncertainty.

And his absence at yet another briefing raised was cause for concern. Had he been sidelined for contradicting the president? Was he in good health?

Where is Fauci? Disturbing. “At a certain point, we have to get open. .. we will be doing something very very quickly.. We can do two things at once.” …Then the President talks about how the flu and auto accidents can also be deadly.. WOW. That lack of Fauci shows.

It’s clear that the coward in the White House can no longer handle having Dr Fauci in the room. That’s very bad news for the American people.

The only person I want to hear from is dr. Anthony Fauci.

Asked about his absence by a Guardian reporter, Trump said: “I was just with him”, explaining that Fauci was “at a task force meeting”. A White House official confirmed Fauci’s attendance at earlier meetings that day and insisted his absence was in keeping with a commitment to rotate speakers “depending on the news of the day”.

Fauci himself attempted to allay concerns about his current status – professionally and physiologically. Reached at his home on Sunday, the longtime director of the National Institute of Allergy and Infectious Diseases told Science magazine that he was “exhausted” but otherwise “good”.

But Fauci went further. He conceded that some of what Trump has said does not “comport” with the facts. Fauci, who has served six US presidents, said he is working with the members of the task force to ensure Trump shares accurate information from the podium about the coronavirus, but admitted that it can be a difficult task.

“But I can’t jump in front of the microphone and push him down,” Fauci said. “OK, he said it. Let’s try and get it corrected for the next time.”

From behind the podium, Trump has repeatedly made inaccurate or misleading claims about the coronavirus outbreak from the availability of testing to the development of a vaccine. And on more than one occasion, it has fallen to Fauci to politely but firmly correct the president – sometimes in real time.

At recent briefings, Trump, acting on instinct, has promoted a widely-available malaria drug as a possible antidote to Covid-19, the disease caused by the coronavirus. Asked by a reporter if it was true that the drug could prevent the disease, Fauci was blunt.

“The answer is no,” he replied, explaining in his distinctive Brooklyn accent that the science was simply not there yet. “The information that you’re referring to specifically is anecdotal.”

Later in the briefing, Fauci placed a hand over his face as if to stifle a laugh when Trump interjected and referred to the state department as the “deep state department”. The doctor’s face-palm immediately became an internet meme, even as some noted that he touched his face in violation of public health guidelines.

““I don’t want to embarrass him,” Fauci said of his diplomatic approach, in a weekend interview with New York Times columnist Maureen Dowd. “I don’t want to act like a tough guy, like I stood up to the president. I just want to get the facts out.”

Trump, ever reluctant to share the spotlight, has taken note of Fauci’s heightened national profile – the interviews, the TV appearances and the online following. Inviting him to speak at a press conference last week, Trump remarked: “I think everybody out here knows you pretty well.”

He added: “Tony has been doing a tremendous job working long, long hours. And you’ve seen a lot happen, but this has been – it’s been a great experience, and working with you has been terrific.” That was 13 March.

Ten days later, Trump’s opinion of the doctor appears not to have been dimmed by their disagreements.

Q: “Where is Dr. Fauci right now? Why is he not at this briefing?”

President Trump: I was just with him…he’s at the task force meeting right now.”

Q: “Does he agree with you about the need to reopen the economy soon?”

“I like Dr Fauci a lot,” he told reporters on Monday.

But did Fauci agree with Trump’s latest declaration – that he could soon begin easing restrictions on social distancing and public activities recommended by public health officials to help contain the spread of the coronavirus?

Trump paused, then replied: “Well, he doesn’t not agree.”