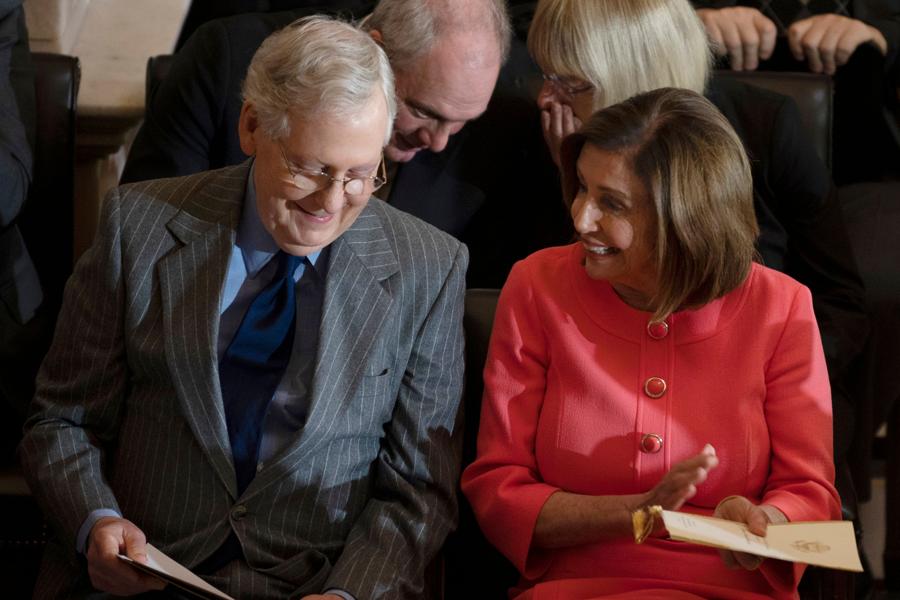 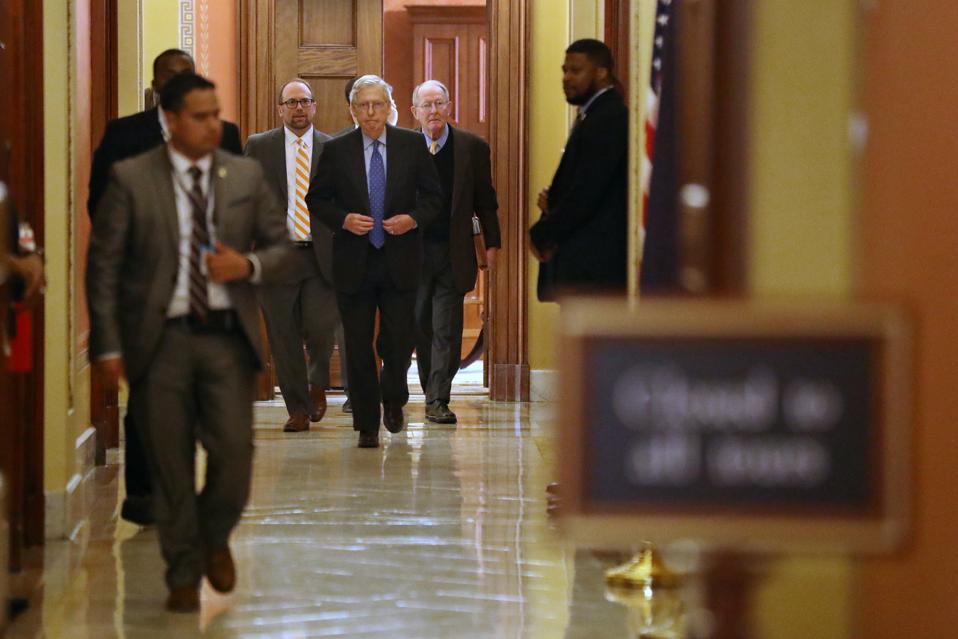 WASHINGTON, DC – MARCH 24: Senate Majority Leader Mitch McConnell (R-KY) (C) and Sen. Lamar … [+] Alexander (R-TN) (2nd R) leave a meeting in the Strom Thurmond Room as negotiations continue on a $2 trillion economic stimulus in response to the coronavirus pandemic March 24, 2020 in Washington, DC. After days of tense negotiations — and Democrats twice blocking the nearly $2 trillion package — the Senate and Treasury Department appear to have reached important compromises on legislation to shore up the economy during the COVID-19 pandemic. (Photo by Chip Somodevilla/Getty Images)

As much of the United States practices social distancing and closures of nonessential businesses in response to the coronavirus, political leaders have been negotiating a massive stimulus package to help ailing Americans.

While not the largest piece of the bill, one of the more impactful aspects of a stimulus package are direct payments to families – a “stimulus check.”

First, Majority Leader Mitch Mcconnell and Senate Republicans proposed the “Coronavirus Aid, Relief, and Economic Security Act,” or CARES Act. The proposal would give taxpayers a stimulus check of up to $1,200 ($2,400 for those filing jointly) and an additional $500 for each qualifying child.

Next, Speaker Nancy Pelosi and House Democrats revealed the “Take Responsibility for Workers and Families Act.” In that proposal, all taxpayers would receive up to $1,500 ($3,000 for joint returns) and an additional $1,500 for each qualifying child up to a maximum of three.

Both proposals included income phaseouts that began at $75,000 for single filers and $150,000 for joint filers. Both payments were to be treated as an advance against a tax credit.

The two proposals cover much more assistance than a stimulus payment to families. Much of the debate between the two parties coalesced around other aspects of the bills, most notably oversight over the $500 billion fund that would help various industries impacted by the coronavirus.

Finally, after several days of negotiations, we have an agreement between the White House and the Senate on a $2 trillion stimulus bill.

How Much Is The Stimulus Check?

We do not yet have the final bill but it appears the final stimulus payment is similar to what was originally in the Senate’s proposal, with one notable change:

In addition to direct payments, the bill also includes expanding unemployment benefits to four months and add more financial assistance to those who are out of work. This would add an additional $600 per week to the average unemployed worker.

What We Don’t Know Yet

We do not know how the payments will be made, whether by direct deposit or check, and how to inform the Treasury about changes to your banking information or address.

What Are The Next Steps?

An agreement is not yet law, there are still quite a few steps before we can fire up the printing presses for the checks.

This deal was reached between Senators negotiating with the White House and is expected to pass the Senate quickly.

House Speaker Nancy Pelosi was updated during the process and with the House of Representatives out of session, Speaker Pelosi intends to pass a bill in the House by unanimous consent. This would not require the chamber to reconvene, only two representatives need to be present to vote in favor of the bill, but could be blocked with just one member objection.

It’s expected that the President would sign the legislation into law as quickly as possible.

Quite a few more steps left but political leaders are very motivated to get this completed soon.