In a Sunday letter to Congress, Treasury Secretary Steven Mnuchin and White House chief of staff Mark Meadows—both of whom are representing the interests of the Trump administration in negotiations over the next federal aid bill—called on Congress to “immediately” vote on a relief bill to spend unused Paycheck Protection Program funds as a stopgap while top policymakers continue to hash out a comprehensive rescue package. 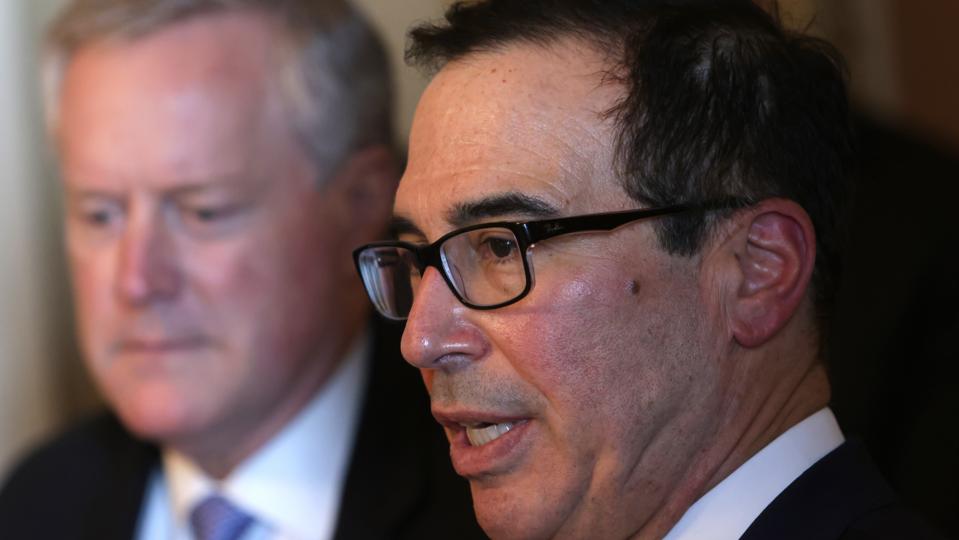 U.S. Secretary of the Treasury Steven Mnuchin speaks to the media as White House Chief of Staff Mark … [+] Meadows listens on August 4, 2020 in Washington, DC.

The push comes as stimulus negotiations—thrown into chaos last week after being cancelled and then revived again by President Trump—have taken on a new urgency ahead of the election on November 3.

In an interview on Fox News’ Sunday Morning Futures, Trump said his administration was “ready to go” on the next comprehensive bill, but House Speaker Nancy Pelosi (D-Calif.) on Sunday said that the Trump administration’s latest offer was “grossly inadequate.”

The two sides “remain at an impasse,” Pelosi said Sunday, with the White House’s most recent plan clocking in at $1.8 trillion, while the latest offer from Pelosi is worth $2.2 trillion and has already passed the House.

Many Senate Republicans also oppose the White House plan and without their support, any deal that Democrats led by Pelosi make with the White House is unlikely to become law, though White House economic advisor Larry Kudlow suggested Sunday that the Senate GOP may “go along with” a more expensive stimulus package if the two sides are able to reach a deal.

Mnuchin and Meadows said Sunday that they would continue to work with Pelosi and Senate Minority Leader Chuck Schumer (D-N.Y.) to reach a deal, but in the meantime Congress should pass legislation allowing unspent PPP money to be repurposed for coronavirus relief.

The letter did not say specifically how Mnuchin and Meadows believe those unspent PPP funds should be used.

$134 billion. That’s how much money remains in the Paycheck Protection Program, according to the Small Business Administration.

“Now is the time for us to come together and immediately vote on a bill that will allow us to spend the unused Paycheck Protection Program funds while we continue to work toward a comprehensive package,” the two officials wrote. “The all-or-nothing approach is an unacceptable response to the American people.”

The PPP was designed to provide forgivable loans to cover payroll and overhead costs to keep small businesses afloat during the coronavirus recession as part of the $2.2 trillion CARES Act. The program ran out of its original $350 billion in funding just two weeks after it launched, and was extended by Congress with another $310 billion shortly thereafter. It closed on August 8.

This isn’t the first time the idea of repurposing unspent PPP money has been floated in Washington. Mnuchin suggested the idea in September, saying at the time that the remaining $134 billion could be redirected towards restaurants, hotels, and other hard-hit businesses.