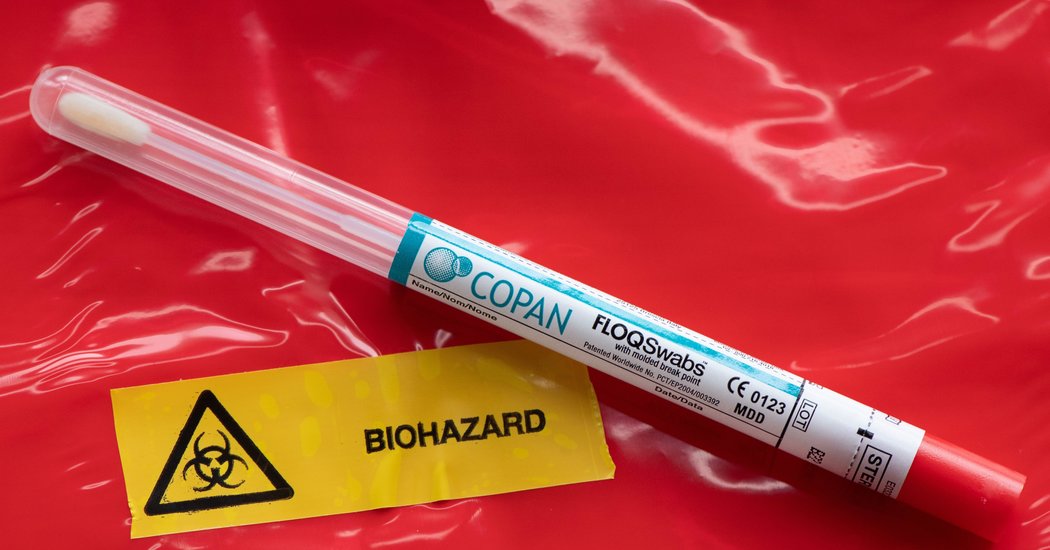 WASHINGTON — Faced with steep shortages of medical supplies to combat the coronavirus pandemic, the White House is scrambling to coordinate with the private sector to import and manufacture testing swabs, face masks and hand sanitizer.

A lack of nasal swabs has been a pressing obstacle as the United States tries to accelerate testing for the coronavirus and gain a clearer view about the extent of the spread of the virus. Supply chains fractured by travel restrictions have hampered efforts to get crucial supplies, creating the need for the military to intervene even before President Trump invoked the Defense Production Act, which gives the federal government the power to force companies to make products for national security reasons.

Mr. Trump has so far held back from prompting such an intervention, declaring at a news conference on Thursday that “the federal government’s not supposed to be out there buying vast amounts of items and then shipping,” and adding, “You know, we’re not a shipping clerk.”

But this week, the White House did get into the shipping business, when the Defense Department sent a C-17 cargo aircraft to an air base in Italy to procure 800,000 swabs from Copan, a medical device manufacturer, and take them to Memphis.

Because of the urgency of the situation, the White House personally asked the chief executive of FedEx, Frederick Smith, to offer the use of its airplanes to distribute the swabs, which arrived on Tuesday, to labs and testing centers in California, North Carolina, Ohio and New Jersey.

Peter Navarro, Mr. Trump’s trade adviser who has been increasingly focused on alleviating supply chain bottlenecks as quickly as possible, has been helping coordinate the multiagency effort to procure the swabs.

After a sluggish initial response to the coronavirus, the Trump administration is trying to leverage its relationships with corporate America to rapidly mobilize supplies such as swabs — a key component of test kits — face masks and hand sanitizer. The Trump administration has also been talking to car manufacturers that have suspended operations about using their facilities to build ventilators.

Another shipment of swabs from Italy is expected to land in the United States on Friday and the Trump administration hopes to run three such missions a week for the next month, obtaining 1.5 million swabs a week.

The White House contacted FedEx about the mission because its shipping hub in Tennessee can reach every part of the country.

Richard Smith, the executive vice president of FedEx Express and the son of the company’s chief executive, said that FedEx helped manage the logistics of repackaging and labeling the swabs to prepare them for distribution. He said that the cost of coronavirus shipments was being covered by the federal government and the company’s charitable funds.

“What we’re focused on is expediency and stepping up to do whatever is needed to get these test kits out,” Mr. Smith said.

Norman Sharples, the chief executive of Copan’s American subsidiary, said that its plant in Italy had doubled its weekly shifts to keep up with soaring demand for testing swabs.

“You’ve got an expansion in demand and an expansion of people testing,” Mr. Sharples said. “So we’ve increased our output.”

Working to facilitate imports is a change for Mr. Navarro, a China hawk who is among the biggest protectionists in the Trump administration. Since a trade truce was reached in January, he shifted his focus from ratcheting up tariffs on Chinese goods to policing counterfeit products shipped from China. In recent weeks he has been working on a “Buy American” executive order that would reduce the United States’ reliance on foreign countries for pharmaceutical production.

The executive order, which has not yet been formally presented to the president, has rankled some of the free traders in the administration who believe that supply chains must remain as open as possible as a pandemic shuts off parts of the global economy.

In the meantime, Mr. Navarro, who oversees the White House’s Office of Trade and Manufacturing Policy, said that he had been trying to work across government agencies to cut red tape to make medical products available.

The White House has also been coordinating with the American division of Pernod Ricard, the French spirits company, so that its facilities in the United States can be used to make hand sanitizer. The company said that it would produce and bottle more than 5,000 gallons of sanitizer in the next two weeks at facilities in West Virginia and Arkansas and that it was considering doing so in Kentucky and Texas next month.

Ann Mukherjee, the chief executive of Pernod Ricard’s business in North America, said that the White House helped the company get regulatory approval to make hand sanitizer and sell over the counter products within just 48 hours and that it was working with the Federal Emergency Management Agency to distribute the bottles where they were most needed.

Mr. Navarro said that he also helped Honeywell get regulatory approval last week to set up a manufacturing facility in Rhode Island where it can ramp up production of the N95 face masks that have been widely used by hospital workers helping patients with the coronavirus. Honeywell did not immediately respond to a request for comment.

Thomas Bollyky, the director of the global health program at the Council on Foreign Relations, said that the United States produces only 800,000 to one million swabs a week, making imports critical as demand for virus testing surges. He noted, however, that the United States might have to bolster its domestic production if European countries moved ahead with export restrictions on scarce medical products.

“We are going to see a need for a dramatic ramp up in testing,” Mr. Bollyky said. “That is going to have to broaden beyond the current producers of these swabs to the United States.”

Mr. Navarro, who has been the biggest proponent of tariffs in the Trump administration, concurred that eventually such products would need to be made in the United States.

“Over time, what you need to do is bring the production and supply chains home, and we’re working on that as well,” he said.