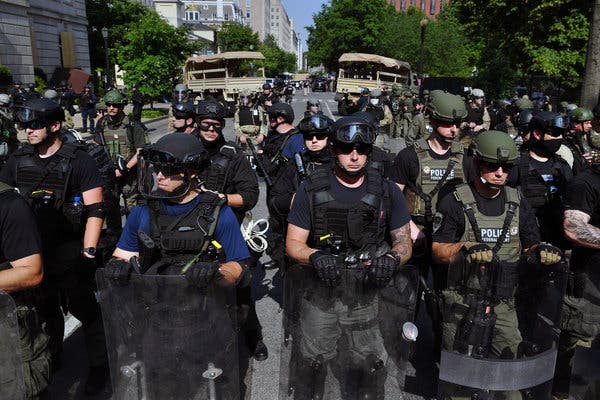 Police and security forces, some wearing no identifying insignia, blocked access near the White House during protests on Wednesday in Washington.Credit…Mandel Ngan/Agence France-Presse — Getty Images

WASHINGTON — Muriel Bowser, the mayor of Washington, has had few options this week to hold back the overwhelming show of federal force in her city: the national guardsmen from outside D.C. whom she did not request, the Bureau of Prisons and Border Patrol officers the city rarely works with, the troops in unmarked uniforms who have upset residents.

Attorney General William P. Barr has directed all of this, making the nation’s capital the primary stage for President Trump’s vow to “dominate the streets” to quell protests. He has given Mr. Trump frequent updates since Monday on the efforts to restore order, a senior official said. Federal officials have not asked for consent, or even previewed many of their plans with local officials, who have at times also been unsure who is wielding riot gear on the city’s streets.

The District claimed a victory on Thursday as federal troops retreated from streets around the White House. But for many D.C. residents, this moment has made their longtime predicament all the more painful: They have no governor to turn to, no senators of their own who can go toe-to-toe with an attorney general. They have no power in the Capitol building, after decades of failed campaigns for statehood.

“People have to understand the root cause and be willing to do something about the root cause,” Ms. Bowser said at a news conference on Thursday. The city will continue to have limited control over what happens on its streets without statehood, she said.

With the largest demonstration against police brutality expected to descend on Washington on Saturday, Ms. Bowser and Mr. Barr are locked in a delicate and fraught fight. House Speaker Nancy Pelosi on Thursday made clear that she was looking on, sending a letter to the president questioning the “increased militarization” on the capital’s streets.

Mr. Barr needs enough support from the mayor and the District’s chief of police for his actions not to be construed as a police state takeover of Washington, an overwhelmingly Democratic city that has come to symbolize the battle between Mr. Trump and some of the nation’s cities.

Ms. Bowser, for her part, could face consequences for protesting too loudly, unlike other mayors around the country who may be angered by the president’s posture toward protesters. Mr. Trump has not yet invoked his strongest lever of power over the city, an obscure provision allowing him to take control of the District’s police force in an emergency. But the White House floated the threat this week.

Mayor Muriel Bowser of Washington on Wednesday.Credit…Shawn Thew/EPA, via Shutterstock

The District could be punished in other ways, too: The federal government could refuse to repay expenses the city has incurred policing areas around the White House and Capitol. The administration’s Republican allies in Congress could quash other city goals with the kind of appropriations riders that have blocked city laws addressing abortion and marijuana.

The federal government could also barricade off more streets and government properties that were once accessible to D.C. residents. Ms. Bowser lamented Thursday that areas on the White House and Capitol grounds she could visit growing up have become off-limits, and worried that today’s increasingly hardened barriers could become permanent.

Mr. Barr was attorney general under President George H.W. Bush when riots related to the beating of Rodney King, an unarmed motorist, broke out in Los Angeles. Mr. Barr considered using the military to restore order, and did not believe that permission from the governor was a “prerequisite.” Ultimately he chose to use F.B.I. agents in Los Angeles, and save the military as a last resort.

Nowhere has the fight for the streets of Washington played out more visibly than downtown, where the federal government oversees the park adjacent to the White House and where the mayor has control of the surrounding streets that are home to numerous federal government buildings.

After some people looted stores, set fires and vandalized the Treasury building on Saturday and Sunday evenings, Mr. Barr expanded the area controlled by federal officers beyond the border of the park, and he took control of the surrounding streets with checkpoints and roadblocks.

City officials objected to the move, and when federal officers pulled back from those streets on Thursday morning, the Metropolitan Police Chief, Peter Newsham, claimed a modest success for frustrated residents. Mr. Barr, in a news conference on Thursday, seemed to suggest that he had made the decision on his own.

“I felt that we could afford to collapse the perimeter and eliminate some of the checkpoints,” he said. “I think that we have seen the sharp reduction in violent episodes.”

If that calm continues, there will inevitably be another fight over what prompted it. Federal officials say their overwhelming force has made a difference. District officials say it is peaceful protesters — there were few arrests in the city on Tuesday and none Wednesday — who have prevented the convergence of so many law enforcement agencies from turning dangerous.

“The people saved us from this confusion,” said Eleanor Holmes Norton, who represents the District but has no voting power in Congress.

Karl Racine, the Washington attorney general, objected to any appearance in Mr. Barr’s comments on Thursday that the District was on board with the deployment of federal officers to the city’s streets. “That simply is not the case,” Mr. Racine said.

“What the White House doesn’t want people to see is the multigenerational, multiracial, multiethnic, multigeographic, overwhelmingly peaceful nature of these protests,” Mr. Racine said. “This isn’t a few protests. This is a movement that believes justice should be for all; that policing should be fair and not disproportionately harsher for some.”

Mr. Racine said he contacted the dozen-plus states that had been asked to send national guard forces to the District, and that none of them could recall that the Trump administration cited any legal basis for the request. The D.C. National Guard has been in the city, too, the only force the mayor has requested. But under home rule, she didn’t have the power to deploy them herself; only the president can do that.

Mr. Racine said in a letter to Mr. Barr, Defense Secretary Mark Esper and Mr. Trump’s chief of staff, Mark Meadows, that he was reviewing the legality of the federal government’s decision to ask out-of-state national guardsmen and federal law enforcement entities, including the Bureau of Prisons, to police Washington’s streets. 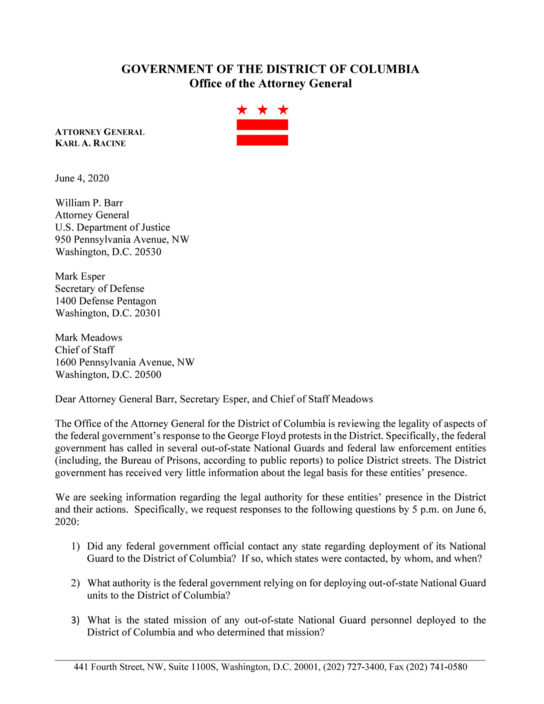 “We are seeking information regarding the legal authority for these entities’ presence in the District and their actions,” Mr. Racine wrote.

“Specifically, do they have authority to make arrests and, if so, for what offenses and in what geographical boundaries?”

It has been hard this week to separate questions like who is telling which officers what to do from the ultimate question of statehood.

“It’s impossible to look at it any other way,” said Garry Young, a political scientist at George Washington University who has followed home rule fights in the city. “It’s utterly unlike if this was going on in a different city.”

Near Lafayette Park on Wednesday, when city streets were still blocked by rows of officers wielding riot shields, protesters were furious at the incursion into streets and parks that they believed belonged to them and where the protests have been peaceful.

“Every day it’s a further perimeter, it’s a stronger presence, it’s a higher-ranked agency,” said Kris Pritchard, 37, a District resident. “And people are sick of it.”

His fiancé, Bernard Farley, recalled when it was possible to stroll at night down to the White House, through Lafayette Square.

“Usually it feels special to live here,” he said. “Now it feels like we’ve been invaded in our own spaces.”