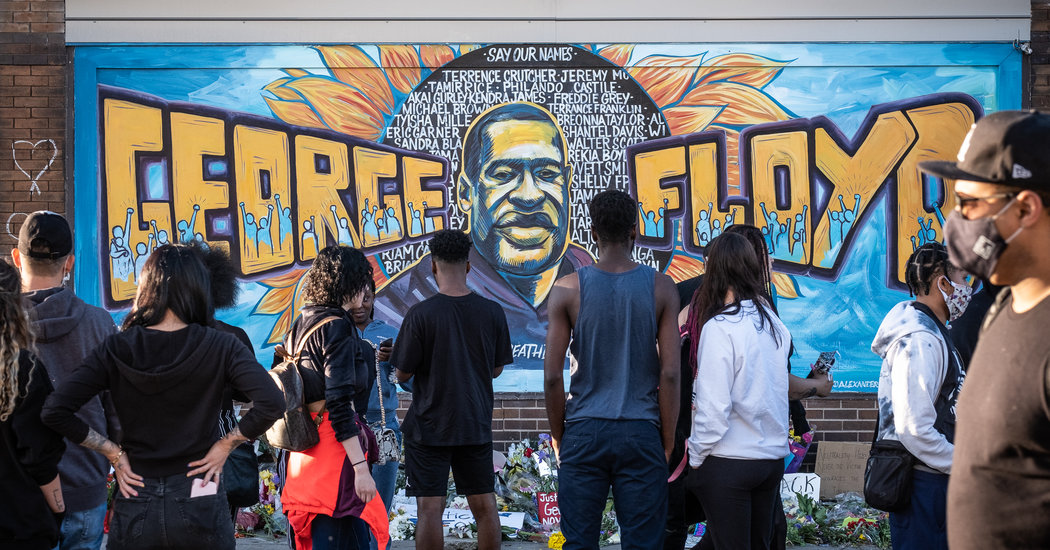 WASHINGTON — A longtime friend of George Floyd’s who was in the passenger seat of Mr. Floyd’s car during his fatal encounter with a Minneapolis police officer said on Wednesday night that Mr. Floyd tried to defuse the tensions with the police and in no way resisted arrest.

“He was, from the beginning, trying in his humblest form to show he was not resisting in no form or way,” said the friend, Maurice Lester Hall, 42, who was tracked down on Monday in Houston, arrested on outstanding warrants and interviewed by Minnesota state investigators.

“I could hear him pleading, ‘Please, officer, what’s all this for?’” Mr. Hall said in an interview on Wednesday night with The New York Times.

Mr. Hall recounted the last moments with Mr. Floyd on Memorial Day, May 25, after they had spent part of the day together.

Mr. Hall is a key witness in the state’s investigation into the four officers who apprehended Mr. Floyd, including Derek Chauvin, who knelt on Mr. Floyd’s neck for nearly nine minutes, even after he became unresponsive.

But Mr. Hall — who had outstanding warrants for his arrest on felony possession of a firearm, felony domestic assault and felony drug possession — provided a false name to officers at the scene of Mr. Floyd’s arrest, according to a Minnesota official.

Mr. Hall left Minneapolis and hitchhiked to Houston two days later, after visiting a memorial at the site of the police encounter.

“When the whole world was finding out that they murdered George Floyd,” he said, “I went and said a prayer where I witnessed him take his last breath, and I left.”

Mr. Hall said he had left dinner with his family late this Monday evening when their car was surrounded by at least a dozen law enforcement officers. After his arrest, he was questioned for hours by a Minnesota state investigator about Mr. Floyd’s death — not about his warrants. Mr. Hall was then transferred to the Harris County Jail in Houston, and on Tuesday, he returned to his home in the city, after his lawyers fought for his release.

“When Mr. Hall’s family found us, he had been isolated in jail for 10 hours after being interrogated until 3 a.m.,” said Ashlee C. McFarlane, a partner at Gerger Khalil Hennessy & McFarlane, who is representing Mr. Hall. “This is not how you treat a key witness, especially one that had just seen his friend murdered by police. Even with outstanding warrants, this should have been done another way.”

“I knew what was happening, that they were coming. It was inevitable,” Mr. Hall said in the interview with The Times. “I’m a key witness to the cops murdering George Floyd, and they want to know my side. Whatever I’ve been through, it’s all over with now. It’s not about me.”

Mr. Hall and Mr. Floyd, both Houston natives, had connected in Minneapolis through a pastor and had been in touch every day since 2016. Mr. Hall said that he considered Mr. Floyd a confidant and a mentor, like many in the community, and that he went back to Houston because the “only ties I had in Minnesota that had me Houston-rooted was George.”

Agents of the Minnesota Bureau of Criminal Apprehension, which is building the state’s case against Mr. Chauvin and the three other officers involved in the Floyd case, “attempted to contact Mr. Hall numerous times to no avail,” said Bruce Gordon, a spokesman for the bureau.

Mr. Hall said that he was distraught and working through his trauma with his family, and was not taking phone calls in the days immediately after.

The bureau asked law enforcement agents in Texas to arrest Mr. Hall because it believed he was not cooperating with its investigation. Mr. Hall and Ms. McFarlane, his lawyer, said that he cooperated fully with the Minnesota official’s interview.

“They got a testimony, and that’s what they were after,” Mr. Hall added. “They came and saw, and left me to fighting for my freedom.”

Passengers in the car with Mr. Floyd, a man and a woman, had remained unidentified until Mr. Hall spoke with The Times on Wednesday. Mr. Hall said that he did not know the woman’s name.

Minnesota officials said on Wednesday that the state had upgraded the charges against Mr. Chauvin to second-degree murder from third-degree murder and manslaughter. They also charged the other three officers who took part in the fatal arrest — Thomas Lane, 37, J. Alexander Kueng, 26, and Tou Thao, 34 — with aiding and abetting murder.

All four officers were fired the day after Mr. Floyd died and video of his death went viral online.