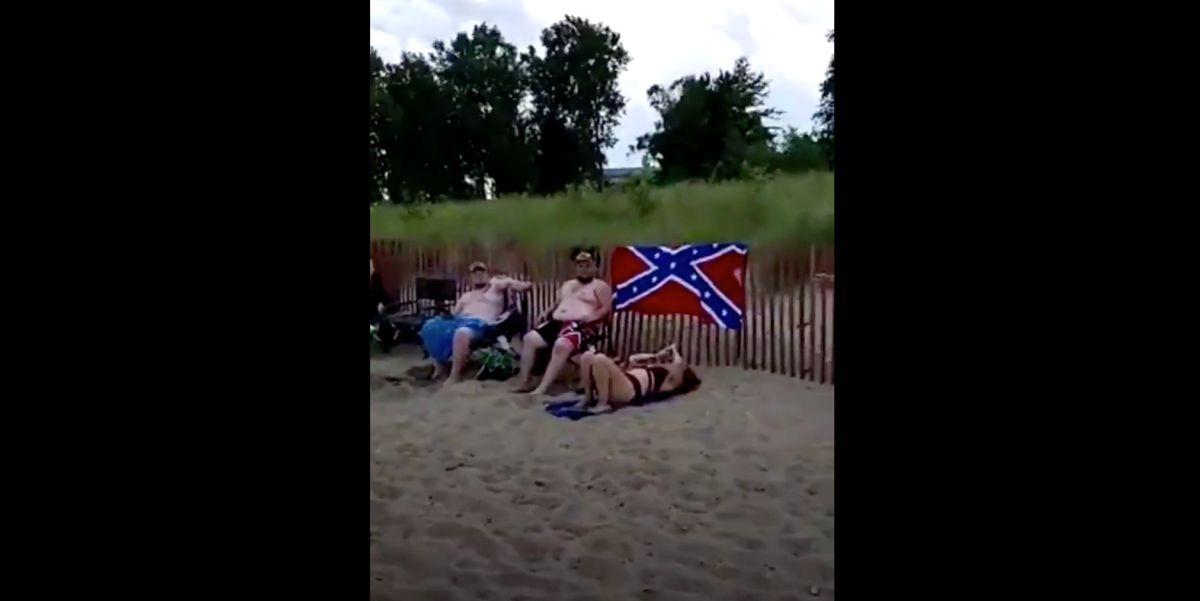 A woman approached a group of Evanston, Indiana, beachgoers earlier this week and railed against them for using a Confederate flag towel as they lounged on Lighthouse Beach.

The incident was caught on video and quickly went viral.

An unidentified black male, however, interrupted her filming and completely changed the tenor of the argument.

According to the Chicago-Sun Times, the woman — identified as LaShandra Smith-Rayfield — shared video of herself confronting the beachgoers on Facebook.

In the video, Smith-Rayfield can be heard telling the group that she was uncomfortable by the presence of the Confederate flag on a towel.

“That flag right there is my swastika,” Smith-Rayfield can be heard telling the group, insisting that she can’t feel comfortable in her own neighborhood because of the towel.

“[It’s] a racist symbol of hate,” she insisted.

As Smith-Rayfield railed against the group, a person she described as a man of color intervened, and defended the group’s right to use whatever towel they wanted — even if it bore the image of a Confederate flag.

The man, who remains unidentified at the time of this reporting, can be heard on the video telling the woman “Let’s not do this.”

She fired back, “This is the United States of American, not the Confederacy. … Why am I arguing with a man of color about this flag?”

The man responds by pointing out that he served in the U.S. military “to defend this flag,” and that she was the one who was out of line for harassing the group.

“Just leave them alone,” he can be heard saying. “People like you haven’t done s**t for this country.”

When it was clear that the woman would not see the unnamed man’s perspective, he left, but she remained undaunted.

Smith-Rayfield continued berating the group over the towel, and even reportedly offered to buy it from them for a sum of $20.

The group refused to sell the flag.

No for real. Look at this shit. https://t.co/mBWE6WJGy7

‘F***ing whole beach full of white people’ did nothing

One of Smith-Rayfield’s friends — notable activist and organizer Leslie Mac — also tweeted about the incident on Wednesday.

She sharing just a portion of Smith-Rayfield’s since-deleted video, she wrote, “TBH the more I think about it — the more I want to find that NB man of color — who TF is he? FR FR.”

Mac revealed that Smith-Rayfield — who she identified as a public school teacher — was irate after she saw a photo of the group lounging on the beach on social media.

“F***,” Mac wrote on Wednesday. “I am shaking right now. A college friend was just live on FB confronting a group of white people at Lighthouse Beach in Evanston (IL) that had a Confederate flag on display. She’s a Black public school teacher & drove down when she saw the flag posted on social media.”

She continued, “Y’all can watch it here – TW [trigger warning] for when the LONE person of color a non-Black man attacked my friend because ‘she’s the one causing the problem’, the Confederate flag holders were ‘minding their business’ and he ‘fought for their right to display that flag.'”

Mac also blasted the “f***ing whole beach full of white people” who “weren’t saying s**t about that flag being on display.”

Smith-Rayfield chimed in on the lengthy and profane tweet, thanking Mac for sharing the experience on social media.

“Thanks @LeslieMac for posting this. It’s been an emotional ride. It saddened me deeply that a fellow POC stood w/hate against me today. His actions gave them validation (dismiss the angry Black woman and embrace the self-loathing Black man). So sadly they learned nothing today,” she wrote.

On Thursday, Smith-Rayfield tweeted about Friday Facebook event — a protest to be held at the beach due to the incident.

The event, titled “NO ONE IS FREE UNTIL WE ARE ALL FREE,” aims to “[s]how up and protest the complicity of our neighbors.”

“Show Evanston that racism in all of it forms is not welcome here!! Your silence is as violent as the Confederate flag and Nazi tattoos!” the page continued. “Bring your signs and wear your mask!! Share[.]”