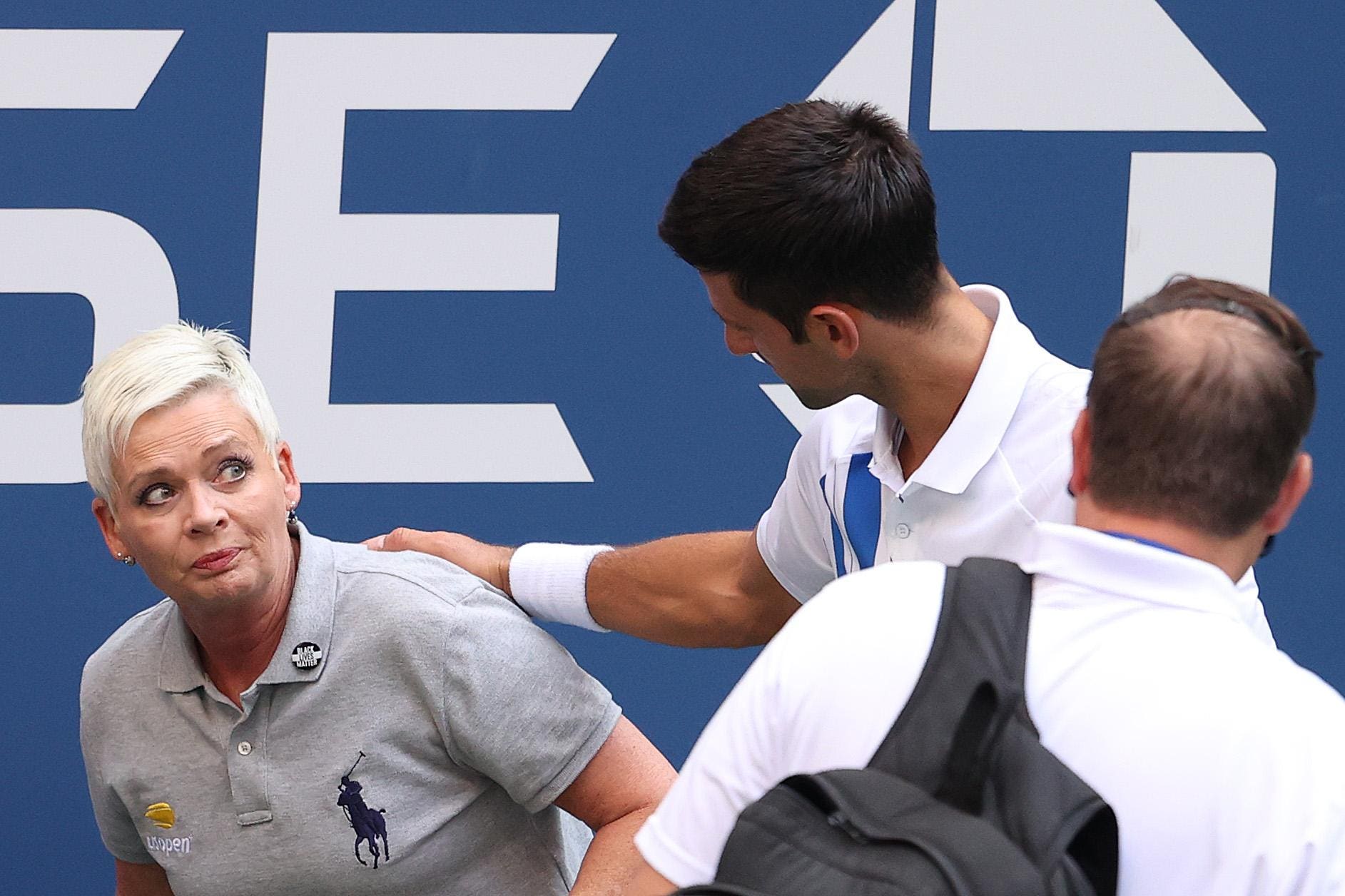 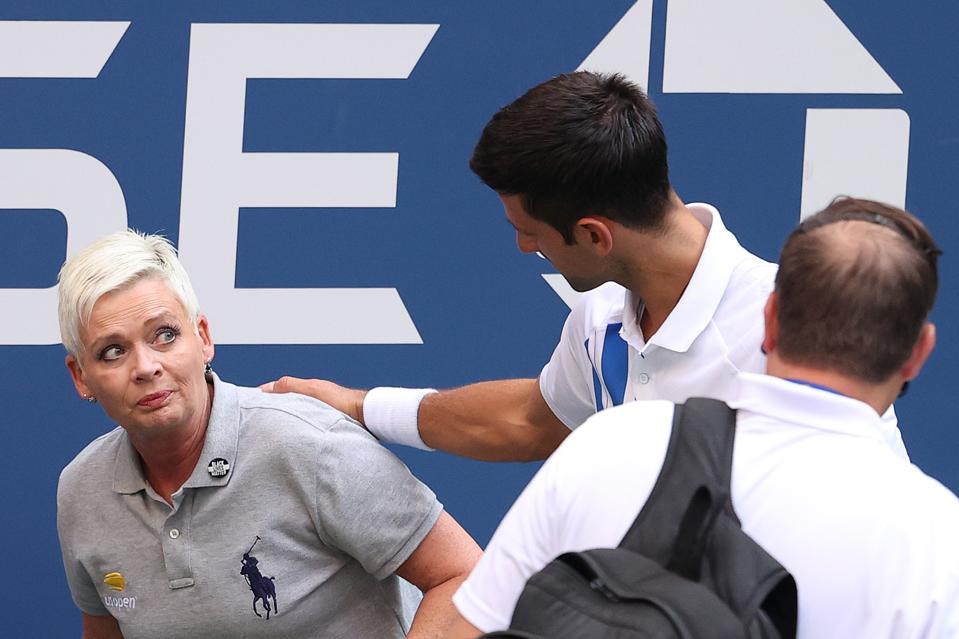 NEW YORK, NEW YORK – SEPTEMBER 06: Novak Djokovic of Serbia tends to a line judge who was hit with … [+] the ball during his Men’s Singles fourth round match against Pablo Carreno Busta of Spain on Day Seven of the 2020 US Open at the USTA Billie Jean King National Tennis Center on September 6, 2020 in the Queens borough of New York City. (Photo by Al Bello/Getty Images)

In a stunning development at the U.S. Open, world No. 1 Novak Djokovic has been defaulted from the tournament after hitting a line judge with the ball during his fourth-round match with No. 20 Pablo Carreno Busta.

After going down 6-5 in the first set, Djokovic smacked a ball in anger that hit a female line judge in the throat. He went to apologize to the line judge, but the damage was done. After a lengthy discussion involving Djokovic, U.S. Open tournament referee Soeren Friemel, Grand Slam supervisor Andreas Egli and chair umpire Aurelie Tourte, he was defaulted. The officials did not watch a television replay.

The USTA issued the following statement:

“In accordance with the Grand Slam rulebook, following his actions of intentionally hitting a ball dangerously or recklessly within the court or hitting a ball with negligent disregard of the consequences, the US Open tournament referee defaulted Novak Djokovic from the 2020 US Open. Because he was defaulted, Djokovic will lose all ranking points earned at the US Open and will be fined the prize money won at the tournament in addition to any or all fines levied with respect to the offending incident.”

Earlier in the match, Djokovic had smacked a ball toward the side of the court where there were no officials or ball boys.

Djokovic will forfeit his $250,000 prize money from the event. Had he gone on to win his 18th Grand Slam title, Djokovic would have won $3 million. The runner-up receives $1.5 million.

“He was the favorite over the entire field at the beginning of the tournament,” former tennis star James Blake said on ESPN. “But this is something where he put himself in this situation. He made a mistake. He twice hit a ball out of anger and one time it hit someone, and that’s the chance you take. It’s unfortunate that it hit someone. We do wish her well, it looked like she was OK. It looked like she was hit right in the throat. It’s dangerous.

The Djokovic default joins a number of other key historical defaults in major events, including John McEnroe at the 1990 Australian Open, Tim Henman at Wimbledon in 1995 and Denis Shapovalov at the Davis Cup in 2017.

Said ESPN’s Rennae Stubbs: “The moment you hit a ball in anger on a tennis court…You are very aware of if you hit somebody, you are done in a tennis tournament. As soon as he hit that linesman, I said, he’s done. There’s no second-guessing.”

This is just the latest blow to Djokovic’s reputation in 2020. Earlier this summer, he and his wife both contracted COVID-19, as did several other top players, on his ill-fated Adria Tour in Serbia and Croatia. Djokovic has since recovered from the virus.

Djokovic is also attempting to start a players’ union to rival the ATP, and has been rebuffed publicly by several top players, most notably Nadal and Federer.

The loss snapped a 29-match winning streak for Djokovic, who was 26-0 in 2020. The Serb had won five of the last seven Grand Slam titles and was seeking his 18th Grand Slam crown.

The “Big Three” of Djokovic, Nadal and Federer have combined to win 13 straight majors dating to the 2016 U.S. Open but that streak will now end. Neither Nadal (COVID concerns) nor Federer (knee surgery) are competing at this event.

Djokovic will play Rome after the U.S. Open and his next chance to win a major will come at the French Open beginning Sept. 27. Nadal has won that event 12 times.

No. 2 seed Dominic Thiem, a runner-up to Djokovic at the Australian Open, and No. 3 Daniil Medvedev, the runner-up to Nadal at last year’s Open, become the favorites in New York.

‘There’s going to be a new Grand Slam champion, that’s all I know,” said No. 5 seed Sascha Zverev, who is seeking his first major title and becomes the favorite on the top half of the draw. “…Now it gets interesting.”

“I mean look, it is is very unfortunate that he hit a tennis ball and it hit the line judge and especially where it hit it,. So yeah, there is a rule in place for it. I think the supervisors and all of them, they’re just doing their job, but yeah, very unlucky for Novak. I think he’s going to be a little bit upset about it.

“If he would’ve hit it anywhere else, I mean we’re talking about a few inches, he would’ve been fine.”