Gov. Gavin Newsom said Monday that the surge in coronavirus cases hitting California was due in part to younger people who might believe “they are invincible” but nonetheless are becoming sick from COVID-19.

These are younger adults — who Newsom called “the young invincibles” — who are testing positive for the disease, a trend that has become apparent as the economy has reopened and working-aged adults return to work and had resumed social gatherings.

“So a lot of these younger folks may be coming into hospitals, but with not as acute needs as what we were seeing in the past,” Newsom said. In L.A. County, working-age adults are making up an increasing share of the percentage of those who are hospitalized, while seniors are making up a declining share.

Some young people think “they are invincible but don’t feel it’s going to impact them and if it does, it’s not a big burden.”

But Newsom and other experts have warned that increasing infection in younger adults may serve as a way the disease can spread to those with underlying health conditions and older adults.

That’s why, Newsom said, he has made moves to strengthen public health orders, such as ordering many of California’s most populous counties to shut down bars and indoor restaurant dining rooms as hospitalizations have increased.

While a higher percentage of coronavirus tests is confirming infections, “we’re not seeing a commensurate increase yet in mortality,” Newsom said. For the last six weeks, California has reported an average coronavirus death toll of about 436 a week since Memorial Day; for the preceding six weeks, the average weekly death toll was 510, a Times analysis found.

“Those are lagging indicators: hospitalizations, ICUs and deaths,” Newsom said.

It can take weeks for newly infected people to get sick enough to be hospitalized, and even more time before they die from the disease.

The same trends of younger adults being increasingly infected with the coronavirus is being seen in L.A. County.

By the Fourth of July, “almost 50% of new cases occur among younger people,” which are adults 40 and younger, said Barbara Ferrer, the L.A. County director of public health, on Monday. In early April, that age group made up only about 30% of new confirmed cases.

Adults 18 to 39 make up about one-third of L.A. County’s population.

Officials have said better use of personal protective equipment, such as masks, gowns and gloves, and increased testing, has helped reduce the effect of the pandemic on nursing homes. 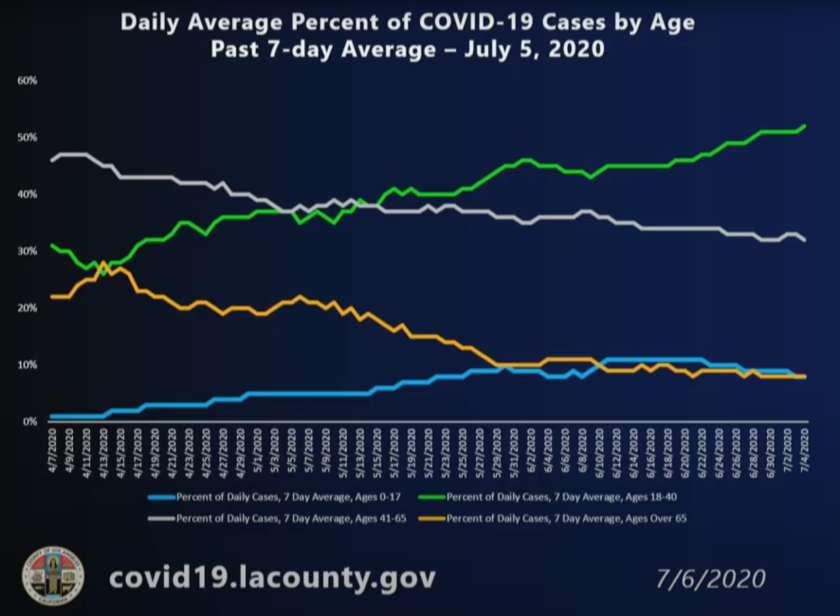 Daily average percentage of COVID-19 cases by age, according to L.A. County.

The age makeup of those being hospitalized in L.A. County has also changed. In late April, seniors 65 and older made up 50% of those hospitalized with COVID-19; middle-aged people between 41 to 64 made up more than 35%; and the youngest adults made up less than 15% of cases. 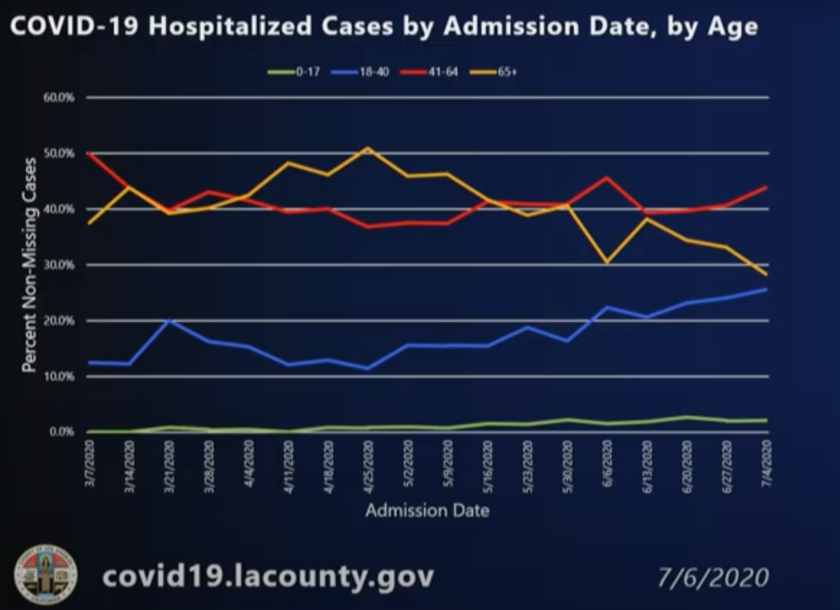 COVID-19 hospitalized cases by admission date by age, according to L.A. County. 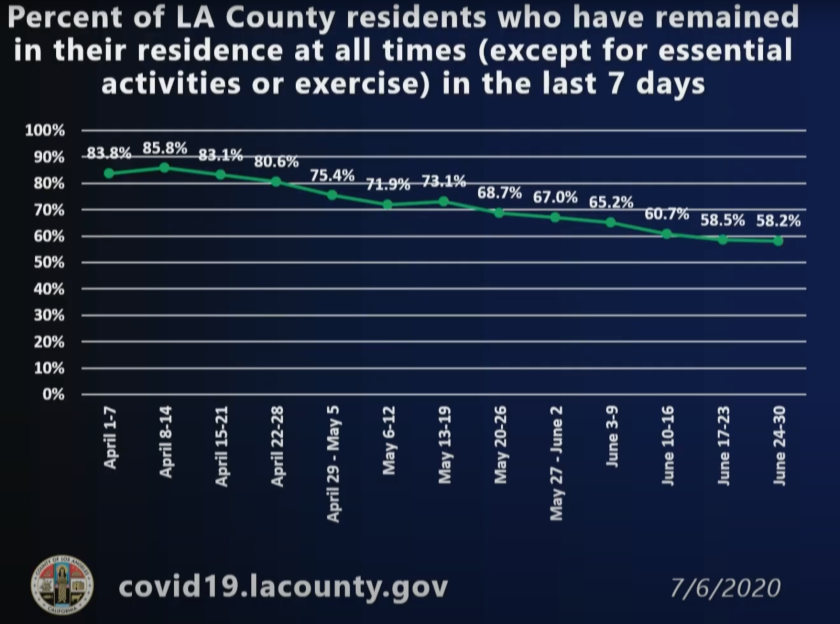 The percentage of L.A. County residents who stayed home except for essential activities and exercise through the last week of June. 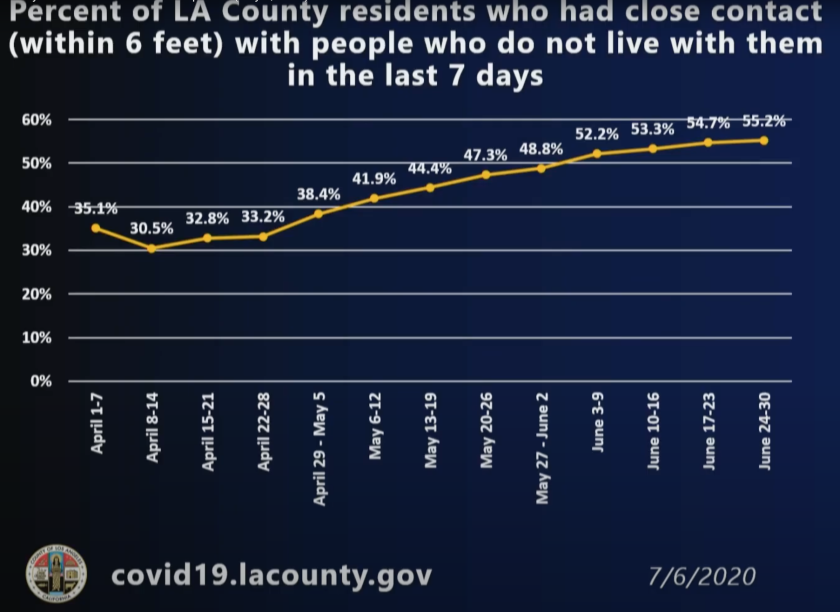 The percentage of L.A. County residents who had close contact with people outside of their household through the end of June. 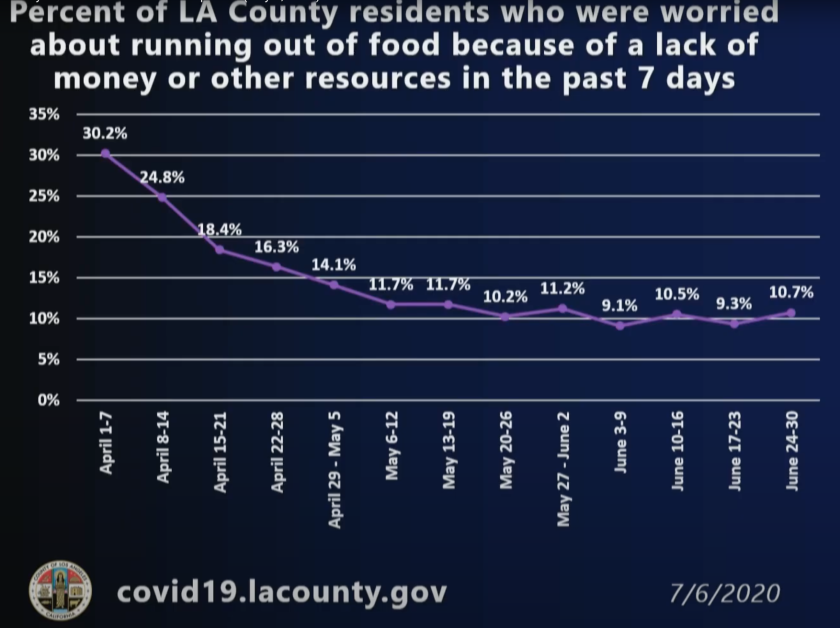 The percentage of L.A. County residents worried about running out of food because of a lack of money by the end of June. 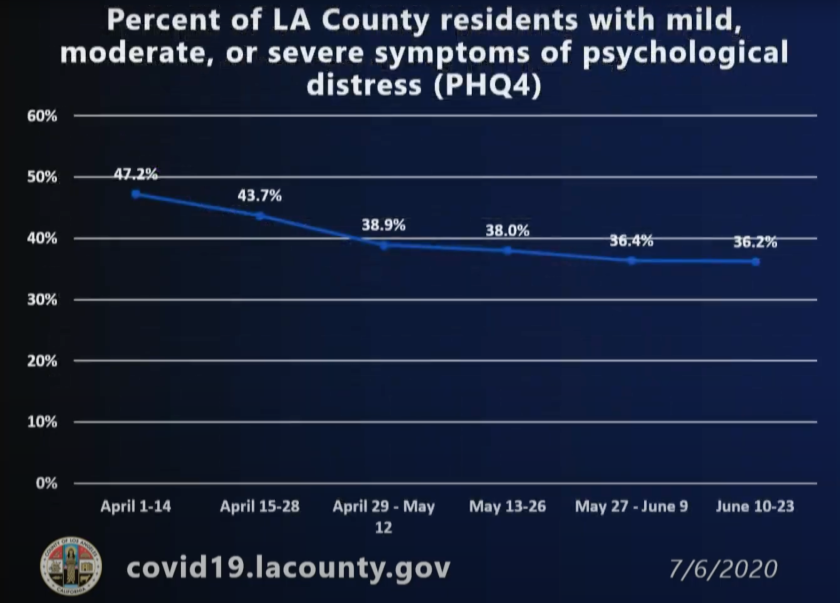 The percentage of L.A. County residents with symptoms of psychological distress as officials accelerated reopening businesses. 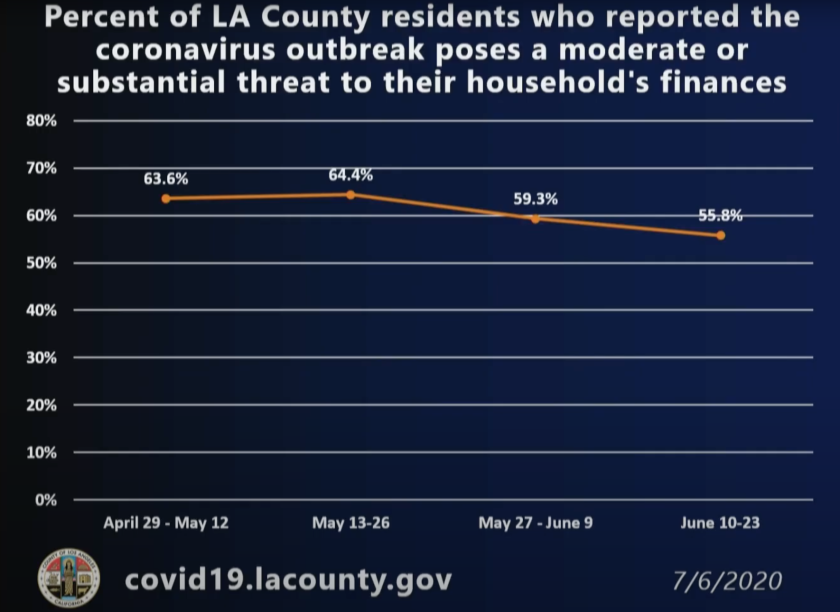 The percentage of L.A. County residents who reported the coronavirus crisis posed a threat to their household finances through mid-June.

“This is the good news about opening — it’s that in fact, for many people, it’s provided some very important and much needed relief,” Ferrer said.

But as people have returned to physical work locations, workplaces have increasingly become sites of exposure to the highly contagious virus. While in early May, 37% of surveyed L.A. County residents said their job required them to come within six feet of other people regularly, 43% said they had done so in mid-June. 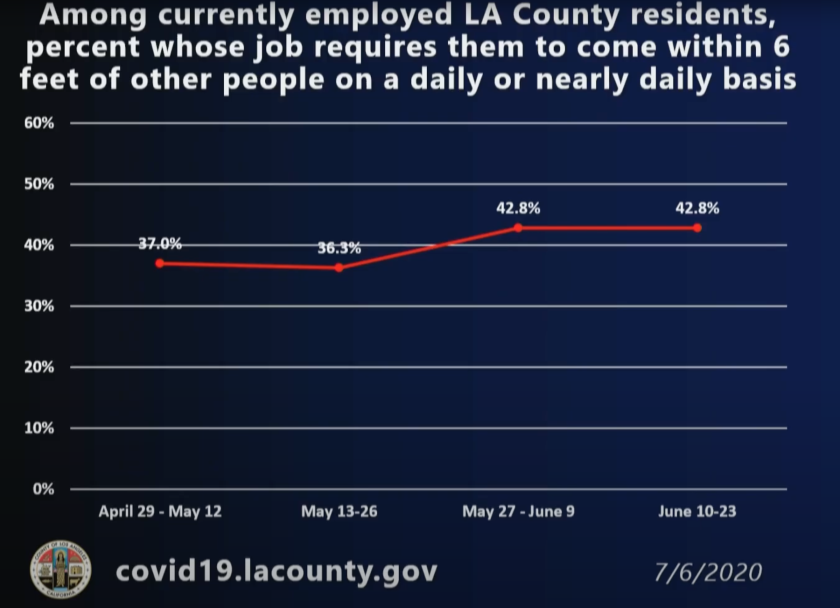 The percentage of L.A. County residents whose jobs require close contact on the job through mid-June.

More L.A. County residents are increasingly concerned California is lifting restrictions on public activity due to the pandemic too quickly, the survey found. While 75% of survey respondents expressed such worry in early May, 79% did so in mid-June.

The rate at which coronavirus tests in California are coming back positive has jumped 42% over the last two weeks, according to data published on the Los Angeles Times’ California coronavirus tracker. An increasing rate of positive test results is an indication that disease transmission is worsening.