Barack Obama has a favorite saying on the campaign trail: “Don’t boo — vote.”

And young protesters, galvanized by police brutality and a rash of political disappointments, seem to be sketching out a present-day response:

Sure, maybe. But first, some well-directed fury.

“I’m tired. I’m literally tired. I’m tired of having to do this,” said Aalayah Eastmond, 19, who survived the 2018 massacre at her high school in Parkland, Fla., became a gun control advocate, saw many legislative efforts stall — and is now organizing protests in Washington over police violence against fellow black Americans.

Ms. Eastmond could be forgiven, she suggested, for doubting that the electoral system would meet the moment on its own: “We do our job,” she said, “and then we don’t see the people we vote in doing their job.”

As nationwide demonstrations continue to simmer, interviews with millennial and Generation Z protesters and activists across racial lines reflect a steady suspicion about the value and effectiveness of voting alone. Their disillusionment threatens to perpetuate a consistent generational gap in election turnout, hinting at a key challenge facing Joseph R. Biden Jr. The former vice president, who announced Friday evening that he had earned a majority of delegates in the Democratic primary contest, has struggled to generate youth enthusiasm despite the demographic’s broad disapproval of President Trump.

To some degree, this dynamic has figured in political fights across the decades: Voters are disproportionately old; marchers are disproportionately young. (Even in the 2018 midterms, when youth engagement spiked compared with four years prior, turnout registered at about 36 percent for voting-age citizens under 30 and nearly twice that for those 65 and up, according to Census Bureau data.)

But the frustrations of today’s younger Americans also speak to the particular conditions of the era, with a preferred candidate in the last two Democratic presidential primaries, Senator Bernie Sanders of Vermont, falling short twice and a sense that those in office have done little to stem a flood of crises.

The deaths of black people at the hands of law enforcement. The relentless creep of climate change. Recurring economic uncertainty — this time amid a pandemic exacerbated by missteps across the federal government.

“In an ideal world, all of these issues would be solved by going out and voting,” said Zoe Demkovitz, 27, who had supported Mr. Sanders’s presidential campaign, as she marched against police violence in Philadelphia. “I tried that. I voted for the right people.”

“And this,” she concluded, adding an expletive, “still happens.”

Democratic leaders are plainly aware of this perception and mindful that a stronger showing from Hillary Clinton among young voters four years ago probably would have turned her fortunes.

Some have moved in recent days to explicitly urge protesters not to overlook November.

In a post on Medium, Mr. Obama disputed the notion that racial bias in criminal justice “proves that only protests and direct action can bring about change, and that voting and participation in electoral politics is a waste of time.”

“Eventually, aspirations have to be translated into specific laws and institutional practices,” the former president wrote, italicizing liberally, “and in a democracy, that only happens when we elect government officials who are responsive to our demands.”

Representative James E. Clyburn of South Carolina, the highest-ranking African-American in Congress, suggested that protests were so valuable in part because they helped introduce new leaders to old systems. At 79, Mr. Clyburn still delights in reminding audiences that he met his wife in jail after a civil rights march in 1960.

Some younger protesters do not dismiss this prospective path — or the wisdom of voting, however grudgingly.

But they say several of the most stinging policy letdowns in recent years have come after nominal election successes.

In New York, Mayor Bill de Blasio won office in 2013 with a pledge to dramatically reform the city’s police culture, memorably showcasing his biracial family throughout his campaign. Through a recent stretch of demonstrations that included the arrest of his own daughter, Mr. de Blasio has largely defended the department’s approach despite news accounts and videos of officers responding to peaceful protests with often striking aggression.

“The mayor’s transformation has been so pronounced that I have trouble wrapping my head around it,” said Ritchie Torres, 32, a Bronx city councilman now running for Congress. 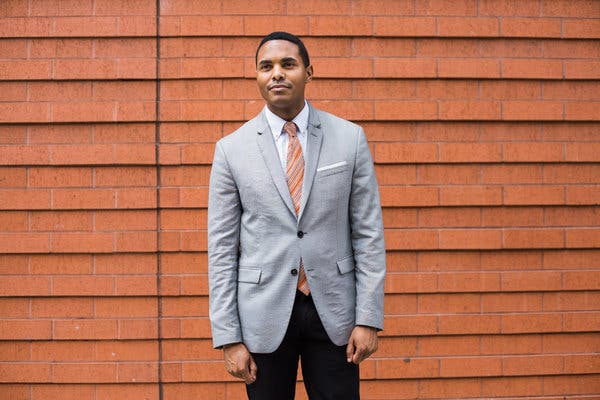 Ritchie Torres, 32, a Bronx city councilman, is running for Congress.Credit…Gabriela Bhaskar for The New York Times

For younger New Yorkers, he said, it was a reminder that electing ostensibly like-minded leadership was not enough. “Young people rightly and clearly see the limitations of voting,” he said, calling it “a necessary but insufficient condition for political engagement.”

Even Mr. Obama’s White House tenure, made possible in large part by his strength with younger voters, has come in for mixed appraisals.

Evan Weber, 28, the political director for the Sunrise Movement, a group of young liberal environmental activists, cited the dissatisfaction among progressives his age over Mr. Obama’s record on financial reform and some climate issues. “People are turning to protest out of necessity,” Mr. Weber said. “We have grown up — millennials and especially Generation Z — with a system that has either delivered too little or not at all.”

People of color have signaled a particular weariness with the implication that voting is a cure-all, especially given the scale of voter suppression efforts and other barriers to the ballot.

Jess Morales Rocketto, 33, a progressive strategist and former campaign aide to Mr. Obama and Mrs. Clinton, said the standard get-out-and-vote message tended to sound most palatable to people who were planning to vote anyway.

“What we’re really wrestling with is not whether or not people vote but whether people believe institutions matter,” she said. “That disillusionment is actually about the fight for a generation of civic participation.”

On that score, some academics say, the protests might help.

Daniel Q. Gillion, a professor of political science at the University of Pennsylvania, said that his research — detailed in a recent book, “The Loud Minority,” about the importance of demonstrations since the 1960s — showed that areas with meaningful protest activity often saw increased turnout in subsequent elections.

Whether younger Americans find a candidate to believe in is another matter. Jason Culler, 38, who also attended the march in Philadelphia, predicted that the current election cycle would not produce leaders who adequately reflected the crowds filling the streets.

“Not this election, not the Democratic Party, not the Republican Party,” he said. “These people don’t represent us, that’s why we’re out here still fighting the same thing.”

If nothing else, such persistence has proved a point, especially for certain participants.

Ms. Eastmond, the Parkland survivor, recalled the skepticism two years ago that she and other teens stirred to action by the shooting would remain as engaged in political activism as the months passed.

She does not hear those doubts so much anymore.

“People were questioning: ‘A lot of the people in that movement, where are they now?’” she said. “I’m here. I’m just one person, but I’m here.”