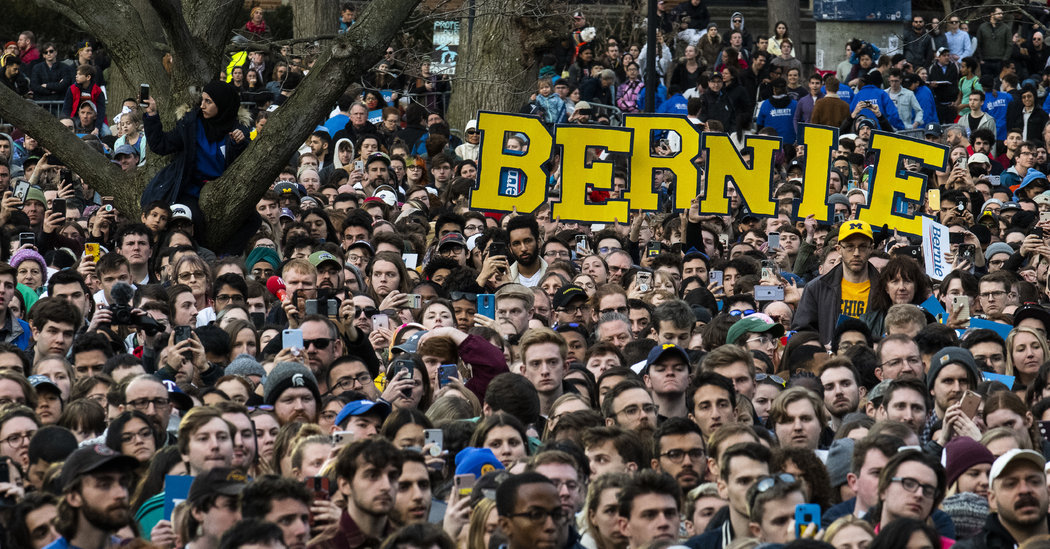 The oldest of them were just out of college on 9/11; the youngest were not yet born. Over the two decades that followed, they all came of age under storm clouds: of war, of recession, of mass shootings, wildfires and now a pandemic.

The result is perhaps the most profound generational gap since the 1960s: between the Generation X, baby boomer and Silent Generation voters who remember one world, and the millennial and Generation Z voters for whom that world never existed.

In November, for the first time, the new generations will have enough electoral clout to seriously compete with the old. But, with Senator Bernie Sanders’s campaign barely clinging to life, many feel more disillusioned than empowered.

In the Democratic primary race, most millennial and Gen Z voters — meaning, roughly, people ages 18 to 39 — have supported Mr. Sanders, of Vermont, or Senator Elizabeth Warren of Massachusetts, and few are enthusiastic about former Vice President Joseph R. Biden Jr. On the Republican side, young voters are less likely than older ones to support President Trump, and some conservatives have left the party altogether.

The problem is circular and self-reinforcing. Just when millennial and Gen Z voters have the most power to choose their leaders, many feel no one is speaking to them. So many of them don’t vote. So many candidates continue not to speak to them. So they get still more disillusioned.

“I would love to see more emphasis on listening to young people and talking to us instead of at us,” said Deana Ayers, 21, a senior at the University of North Texas who voted for Mr. Sanders. “I’m the future of your party. You should be giving me resources and training and listening to the way I want this party to look.”

Within the Democratic Party, the generational tension has played out most vividly through the contest between Mr. Biden and Mr. Sanders. But it is fundamentally about young voters’ sense that they are living in an entirely different world than their parents, and that politicians — or at least the ones winning elections — aren’t acknowledging it.

Millions of millennials, born between 1981 and 1996, cast their first votes for Barack Obama, and members of Generation Z, born after 1996, began entering the electorate as Mr. Obama’s term was ending. For them, his administration is a reference point for who is electable and what is achievable.

“We grew up with a black president who ran on a platform of change,” said Michael May, 20, a student at the University of Toronto who voted for Ms. Warren in his home state, California. “We think that more is possible than older generations do.”

They also think more is needed — and that, too, is a function of experience.

Older generations “had a lot more economic stability when they were growing up and a lot less of this existential looming threat of the next big political or global crisis,” said Lucas Ryan, 23, a student at Washburn University in Kansas who supported Ms. Warren. “It feels like we just never stopped living in some crisis or another.”

Those crises, especially the Great Recession, stunted millennials’ professional and financial growth in ways that did not resolve after the recession ended. Now, the coronavirus threatens to once again upend any gains they have made.

BreAnna Caslake of Arizona said that at 34, she still owed $23,000 in student loans, and that she and her husband were struggling to pay their water bill. Tom Kilian, 28, of Jacksonville, Fla., said he and his wife had been delaying having a child because of financial instability, health care costs and climate change. Both he and Ms. Caslake voted for Mr. Sanders.

Ms. Caslake said she was unlikely to vote for Mr. Biden in November. Mr. Kilian said he would, but reluctantly.

“I am very aware of the contempt that conservative Democrats hold my generation in,” he said. “And the feeling is definitely mutual.”

Millennials and Gen Z lean left, and they largely oppose Mr. Trump: His approval rating in a Gallup poll this month was 36 percent among 18- to 34-year-olds, compared with 44 percent over all.

But many of them also oppose what they see as an outdated Democratic establishment. And they don’t necessarily think replacing Mr. Trump will make their lives better.

“Beating Trump is important to me, but that is not the primary issue of this campaign,” said Adam Miller, 24, who lives in Chicago and voted for Mr. Sanders. “When I hear Bernie speak about the bold action he wants to take against climate change, I see a future where I can consider starting a family again. When he talks about canceling student debt, medical debt and recognizing health care as a human right, I see a life for myself where I can live without these financial burdens.”

Young conservatives, of course, do not want the same policies as young liberals — but many of them express the same disillusionment with their leaders, and the same sense that neither party is addressing their needs.

In particular, young Republicans tend to be more liberal than older ones on issues of gender, sexual orientation, race and multiculturalism.

“The older people in my party are more wedded to preserving culture than preserving liberty,” said Natalia Castro, 23, who grew up in rural Florida and now works in Washington. “A lot of older conservatives are a lot slower to advocate for legal immigration because they’re concerned with what they see as the American identity, and I think that’s problematic.”

Climate change is also a big issue for young Republicans, just as it is for young Democrats. They don’t necessarily support proposals like the Green New Deal. But they do want the government to take urgent action, and the resistance at the top of their party has been alienating.

Blair Egan, 22, said she had argued over climate change with older Republicans, including her father, who she said “isn’t thinking about what the world’s going to look like 50 years down the line because it honestly doesn’t impact him.”

Ms. Egan, a graduate student at the University of Illinois Springfield, also wants the government to address the student debt crisis and the cost of higher education, even if she doesn’t support the sweeping loan forgiveness some Democrats have proposed. She recently graduated from Ohio University with $30,000 in debt despite academic scholarships, and was able to enroll in a master’s program only because of a tuition waiver.

Both she and Ms. Castro are loath to vote for Mr. Trump — who Ms. Egan argued used conservative ideas “as a smoke screen for a message and platform that’s based in anxiety, fear, suspicion and conspiracy” — but are deeply frustrated that their choice is him or a Democrat with whom they disagree on important policies.

Ms. Castro said that she would never vote for a Democrat who supported gun control — her one nonnegotiable issue — but that she wouldn’t vote for Mr. Trump either. She said she wished Representative Justin Amash, the Michigan libertarian who left the Republican Party last year, would run third-party. More likely, she will cast a write-in vote.

Much like young Democrats, many young Republicans say they are frustrated at the degree to which their views isolate them within the party.

“I’ve been called a RINO more times than I can count, which I don’t appreciate, because that’s their way of questioning my integrity and my principles,” Ms. Egan said. “There are plenty of other young Republicans, even if they’re not saying it, who feel alienated or ostracized because they’re being asked to support an ideology they didn’t sign up for.”

Their elders may say much of what is true now was also true decades ago. Boomers grew up with the threat of nuclear extinction and the view that previous generations had made a mess of everything from war and peace to sex. Many young Democrats were alienated from the party establishment and bitter when their favored candidates lost to more conventional ones. Rare is the political moment when the choices of the young trump those of older generations.

Still, in dozens of interviews, young voters on both sides of the aisle said that they felt their generation had been left to clean up after older ones, and that they resented what they saw as a choice by leaders in both parties not to prioritize the issues they cared about.

“I still feel like I relate more to Republicans than Democrats,” said Hannah Daniel, 21, a student at Union University in Tennessee. “But I really do feel a bit politically homeless.”

Their open frustration is really exhaustion, some said: at educating themselves, explaining themselves and still feeling ignored or patronized.

The outright anger comes because they see the stakes as life and death.

“It strikes me as almost tragic that the world has gotten to a place where I feel like my childhood was ended abruptly,” he continued, “and I was forced into a position where I had to fight.”