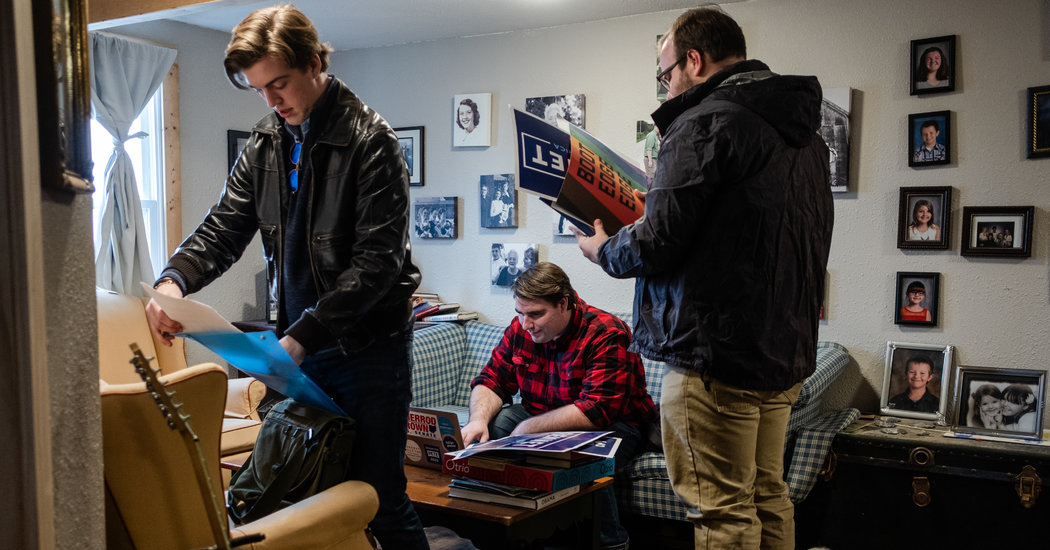 RICEVILLE, Iowa — Charles Uffelman, a bearded and burly Tennessean who is working in Iowa for Elizabeth Warren, stirred gravy on a stovetop while biscuits rose in the oven.

Bryan McNamara, a staff member for Joseph R. Biden Jr. who is fond of a light leather jacket in the Midwest winter, poured strong coffee.

“I love these guys, I love organizing alongside them,” Mr. Uffelman said as he and the others prepared a country breakfast on a recent weekday morning.

The Democratic presidential candidates may have thrown some sharp elbows on a debate stage in Des Moines last week. But two and a half hours away, in a farmhouse beneath a wind turbine, with the odor of a hog farm wafting across a rural road, field organizers for three of the combatants have found a way to coexist in harmony as housemates.

“It helps we all have thick skin,” said Mr. McNamara, who has added 8,000 miles and a coat of dust to a sedan with New York plates. “Being able to come home and, you know, if I had a rough day, being able to talk to people and see that we’re all having similar challenges out here — it’s not just our candidate or our campaign — there are issues with rural organizing that we all encounter.”

The monthslong buildup to Iowa’s first-in-the-nation nominating contest, and the challenges of turning out voters to more than 1,000 caucus sites on Feb. 3, have led to a culture of grass-roots organizing in the state unlike anywhere else. All four leading Democratic campaigns, including Bernie Sanders’s team, have dispatched small armies of field organizers, mostly idealistic young people from out of state, to embed themselves in communities.

They knock on doors, hold meet-ups of potential supporters and otherwise build out networks of volunteers who play a large part in determining the results of the caucuses. Lack of an Iowa ground game in 2016 was a big part of why Donald J. Trump finished second in the state despite leading in pre-caucus polls. Barack Obama’s enormous organizing footprint in 2008 was largely why his margin of victory exceeded expectations.

“You have to build community around the campaign — it has to feel like a family,” said Mr. Uffelman, 26, the Warren organizer, who has joined a local Methodist church in an effort to meet people and become known.

Mr. McNamara, 22, the Biden representative, held a potluck dinner for volunteers he recruited and people just considering the former vice president. “I love community events that pull our supporters together but also don’t put pressure on them to just make it about the candidate,” he said.

Laura Hubka, who has opened her large home to the organizers rent-free since October, in a windswept region on the Minnesota border, is chairwoman of the Howard County Democratic Party. An area of declining population with many older rural voters, Howard County is famous in political circles for having swung more jarringly than any county in America from Mr. Obama to Mr. Trump. It voted for Mr. Obama by a 21 percentage point margin in 2012 and for Mr. Trump by 20 — a 41-point gyration.

“I’ve been asked 300 times what happened,” Ms. Hubka said. The closest she’s come to an answer is that the Obama-Trump vote was a fed-up rejection of both parties by people who had lost faith in government. The county seat, Cresco, is a town of fewer than 4,000 rarely visited by presidential candidates. A wall mural of standout local wrestlers represents community pride, but downtown storefronts are increasingly going dark.

Also, there was a lot of “Hillary hate” in 2016, Ms. Hubka acknowledged. “We were chased out of yards with rakes while door knocking.”

Some of that sentiment still lingers. Mr. McNamara told of knocking at the door of an older woman who had caucused for Mr. Biden in 2008, only to be turned away by a family member, who shouted: “She doesn’t want to talk to you. Trump 2020!”

“That’s one of those experiences where I said, O.K., this is real,” said Mr. McNamara, who grew up in New York’s Hudson Valley.

Ms. Hubka, 55, an ultrasound technician married to a long-haul truck driver, was a Sanders supporter four years ago, when Howard County Democrats gave the Vermont senator 54 percent of their caucus vote. After the general election, she quit the state party central committee in frustration over the factionalism between supporters of Mr. Sanders and Hillary Clinton.

But she did not stay away long from activism. Ms. Hubka endorsed Mr. Buttigieg, the first county chair in Iowa to do so. She believes Mr. Buttigieg, the former mayor of South Bend, Ind., can bridge the divisiveness in her party, in Howard County and in the country.

She does not demonize Trump voters, who include friends and family members. She ticks off some who regret their choice: the husband of a dietitian at the medical center where she works. A conservative official at the Chamber of Commerce angry at the lack of fiscal restraint under Republicans. A “shirttail uncle” of her husband’s, a small farmer hurt by tariffs, who she said “came up to me and put his fist down on the table” and declared he would not vote for Mr. Trump again.

Such voters are not hard to find in Howard County, even if far from the majority. They include Sara Burke, who plans to participate in her first Democratic caucus next month, an abrupt reversal in her short voting history. Ms. Burke, 38, cast her first ballot ever for president in 2016 for Mr. Trump.

At the time, she said, she was “terrified” that Muslim extremists would harm her family in rural Iowa, a fear driven by Mr. Trump that even her 11-year-old son echoed. “He legitimately felt fear; it’s horrible as a parent,” she said.

Her disappointment set in early. She described the president’s bullying speech and braggadocio as “disgusting.”

“Democrat or Republican, I can’t support anybody like that,” she said.

The auto parts factory where Ms. Burke works is near full employment, running three shifts, but she said her income from a $21.50 an hour job is barely above the line that would entitle her children to subsidized school lunches. “If I’m at one of the best paying places around here, I should be able to be grateful and do my job and pay for the lunches and not have to need help,” she said. “It’s crazy to me.”

Last year Ms. Burke became active in the political wing of the United Automobile Workers union. She concluded the president was anti-worker. “What I really realize now, and didn’t before, is if he had his way, my God, our children would be working right alongside of us and none of us would be making any money, there would be no union,” she said.

“From what I was paying attention to and where I was getting my information,” Ms. Burke recalled of 2016, “I was not informing myself well at all.”

Neil Shaffer, the chairman of the Republican Party in Howard County, said he saw no signs of a “Trump revolt.” He predicted the general election would turn on the tone of the two major candidates, in a county where many voters have weak partisan identity and dislike divisiveness. “I think honestly this election will have more to do with personalities than with issues,” he said.

Ms. Hubka is not optimistic the county will swing back to the Democrats in November. If she can shave 10 points off Mr. Trump’s 2016 margin, that would be a victory, she said. “I think it’s going to be a horrible, nasty election,” she said.

Even though she favors Mr. Buttigieg, she welcomes all of the organizers staying under her roof. “One of these three people’s candidates is going to be the nominee,” she said.

Usually after dinner, her three lodgers head upstairs to separate rooms to log data from their day or work the phones. “They call until 9, which I’ve advised against because Iowans don’t like to be called after 8,” Ms. Hubka said.

Late at night, the organizers drift down to a bar in the basement. They walk a fine line in talking shop — swapping general stories without sharing details about the caucusgoers they’ve recruited or the canvassing scripts used by their campaigns. “We talk about what we’re doing without actually talking about what we’re doing,” Mr. Uffelman, the Warren organizer, said.

All three find that some of the best parts of the job are the lengthy conversations that rural residents are willing to engage in. Mr. Uffelman, in his Southern lilt, recalled speaking for 30 minutes to a farmer fixing a tractor, who had concerns about his health care and corruption in the farm economy. Mr. Uffelman persuaded him to support Ms. Warren, the Massachusetts senator.

“I’m a farm boy, I grew up on a farm, and you know, being able to talk about what his job is like,” he said, “that’s my favorite part of organizing — you get to hear the story.”

The three men said they have never debated among themselves the No. 1 issue for many Democrats: Who is most electable in November?

“I think that’s why this dynamic works,” Mr. Sherman, 28, the Buttigieg organizer, who is an Ohio native, said. “Yes, we’re on different teams now, and yes, we think our candidate is the best person to move forward. But once our party has a nominee, we have to work with each other.”

Mr. Sherman’s laptop is a collage of stickers for candidates he has worked for. He said the housemates hope to stay together after Iowa and through Election Day.

“I’m trying to get these guys to come to Ohio,” Mr. Sherman said.