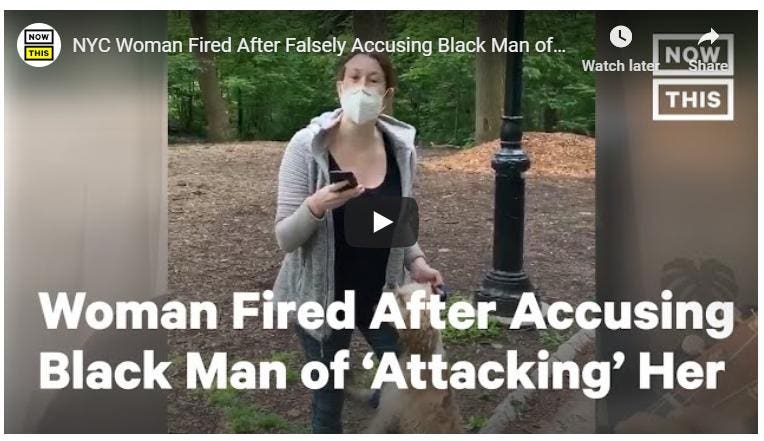 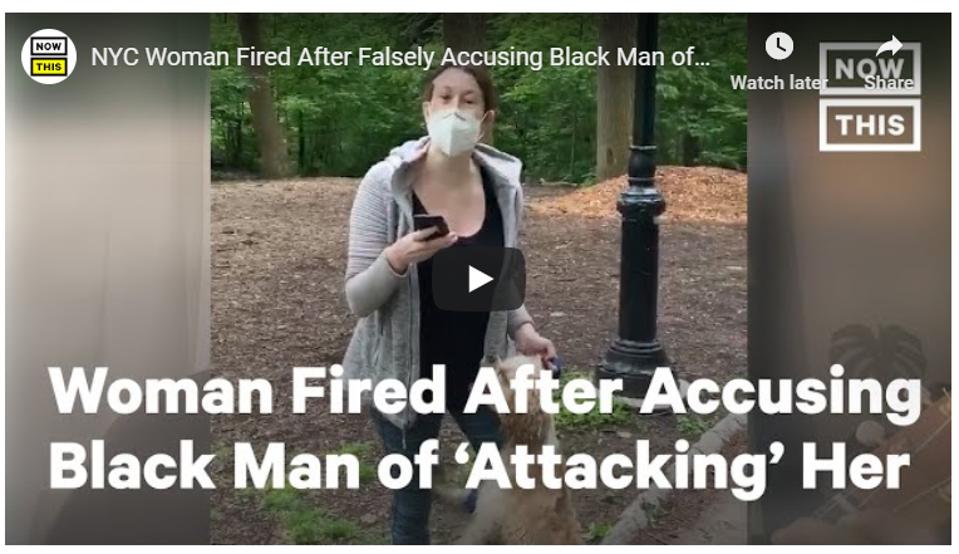 During a recent CNN interview, Amy Cooper said that her “entire life is being destroyed right now” after Christian Cooper posted a Facebook video of their encounter in Central Park. The video arguably shows Amy Cooper threatening the very freedom and life of Christian Cooper while claiming that he was the one threatening her life and safety. It arguably shows her having no problem lying even though that lie could wreak havoc on the life of another. And the video shows Amy Cooper changing the pitch, tone and inflection of her voice while on with a 911 operator so as to send the message that she was being physically assaulted though no one was assaulting her at all. Every single one of these actions is wrong, and Amy Cooper needs to own all of it before she can rebuild her reputation and career.

On Monday, Amy Cooper called police on Christian Cooper (no relation) after he asked her to put a leash on her dog and then refused to stop recording her. Amy is a white woman and Christian is a black man, and they had an encounter in the Ramble woodlands area of Central Park. Two days later, investment firm Franklin Templeton fired Amy Cooper for what it described as racism.

Also on Monday, the same day that Amy Cooper made a false report, police officers in Minnesota were killing a fully restrained and handcuffed 46-year-old black man named George Floyd. For several days now we have watched the outcry, anger, fires, riots and protests on the streets of Minneapolis, St. Paul and various other U.S. cities in response to this unjustifiable killing at the hands of Derek Chauvin and three other police officers, and it is tragic. But let us not forget Amy Cooper. Let us not allow the sheer amount of suffering and the Covid-19 pandemic to erase or overshadow what Amy Cooper did when she feigned being attacked by Christian Cooper in Central Park on the same day that George Floyd was killed. Let’s look more closely at how Amy Cooper damaged her reputation and career on that fateful Monday in Central Park.

Three Things Amy Cooper did to Damage Her Reputation and Career

Though Amy Cooper has since apologized for her behavior and actions in Central Park, she still describes herself in victim terms. She has stated that her life is being “destroyed” by others since Christian Cooper’s Facebook video went viral. In apologizing, Amy says that “words are just words and I can’t undo what I did, but I sincerely and humbly apologize to everyone.” Oh—will someone help me tell Amy Cooper that it was about so much more than words?

What happened in Central Park has far reaching consequences and was about so much more than words. That apology apparently wasn’t enough for her to hold on to her job with Franklin Templeton, and it won’t be enough for her to rebuild her reputation and career either because you first have own what you did before you can successfully repair it.

Amy Cooper was the one breaking the rules in Central Park that day. She was walking her dog in an area that explicitly calls for dogs to be put on a leash. Yet upon being asked to follow this rule, Amy responded with the kind of superiority and indignation that could only be read as white privilege. Her next move was to put race smack dab in the middle of the episode by emphasizing Christian Cooper’s race and placing heavy importance on him being an “African American man.” She wasn’t just calling the police to claim that a man was threatening her. She went out of her way to let Christian know that if he didn’t stop recording her, she could get back at him by using her privilege to cry out that an “African American man” was the one doing the deed.

Before actually calling the police, Amy Cooper first threatened to do so. In doing this, she was letting Christian Cooper know in the most pressing way she could that she had power over him; that she could use her race and gender to get over on him; that she could truly hurt—even destroy—him with one phone call. Then she followed through on the threat and set things in motion for him to suffer for even daring to request that she put a leash on her dog. Amy Cooper decided that Christian Cooper would indeed suffer for having the audacity to challenge her power and her privilege.

The behavior displayed on the video is arguably racism. I don’t know if Amy Cooper is racist or not, but her behavior on the Monday in question was indistinguishable from what most people expect from racists. Using nothing but the color of his skin, Amy sent the message that she was superior to Christian and that he needed to step back in his place because he was a black man. That is racist, and that kind of behavior can damage reputations and careers. It also damages a leader’s credibility. And based on these messages, Franklin Templeton seems to think so as well.

2. Amy Cooper conjured up memories of Emmett Till and the white woman who lied on him.

The first thing I thought about after watching Christian Cooper’s Facebook video was the Emmett Till case. I have studied the Till case in recent years, and the ease at which Amy Cooper lied is one of the most frightening things she did that day. It was remarkable to see how winning in that moment would cause Amy to create an entirely false narrative and then do whatever she felt necessary on the call with the 911 operator to get officials to believe the lie. Watching this uncomfortable and angry white woman go to unthinkable extremes to make a point is so doggone frightening that it scares me to think of what would have happened had Christian not had the video recording.

Emmett Till was a 14-year-old black boy from Chicago. In 1955, his mom begrudgingly allowed him to visit relatives in Mississippi. He was murdered three days after entering a local store when the clerk, a 21-year-old white woman, told people, “I was just scared to death” of Emmett Till. She claimed that Emmett had been inappropriate and whistled at her among other things. The result was that Emmett Till was kidnapped from the home he was staying, tortured for hours and then brutally murdered.

52 years later, Carolyn Bryant Dunham, admitted that she lied and made the story up. Bryant Dunham held on to that lie before Emmett Till was murdered. She held on—and told—that lie to ensure that her husband and his co-conspirator were found not guilty of murder, and she held on to the lie after she divorced her first husband and remarried twice. She held that lie while she lived a comfortable life and raised her own children. And though she—Carolyn Bryant Dunham—admitted decades later that it was all a lie, she was never held accountable for any of it. She never had to account for the murder or the suffering her lie created.

When Amy Cooper exalted her voice and played damsel in distress on the 911 call, she put Christian Cooper’s life on the line. Notice in the above video just how dramatic Amy Cooper became. To increase the sense of urgency for police, she changed her demeanor, raised her voice inflections, and heightened her cries and animations all in an attempt to get police on the scene ASAP. She put it all on the line to ensure that the person on the other end of the 911 call would believe that she was indeed being assaulted. She was trying to ensure that the only impression the individual could get was that her very life may be taken if he or she didn’t act quickly.

With her performance, Amy Cooper raised the stakes and increased the likelihood that police would not just show up to Central Park, but they would show up with guns drawn ready to cause immediate harm to Christian Cooper. She raised the stakes to make police prepared to do whatever they needed to do to ensure her safety.

The very message Amy Cooper was sending to Christian Cooper was that police exist to serve and protect her. She was sending a loud and clear message that she believes police work for her good and will work to Christian’s bad. Her actions left no doubt that she believes that police will do whatever she wants—even arrest, brutalize or kill Christian Cooper—and she was determined to punish him. And all of it was predicated upon the fact that Amy is white and Christian is black.

Yes, Amy Cooper can repair her reputation and career after she takes responsibility for destroying it.

Again, Amy Cooper says that others are now destroying her life. That is where she is wrong. She did this. She ruined her reputation and career, and until she owns her part in it, nothing will get better. We all make mistakes as human beings. Sometimes we do bad things, but we can certainly repair and rebuild—and Amy Cooper can too. I firmly believe that she can repair this damage. She can rebuild her reputation and career, but first she has to take full responsibility for destroying it.

I recommend that instead of complaining about how her life is now destroyed, Amy Cooper should reflect on how so many people now believe that she tried to destroy Christian Cooper’s life. And instead of apologizing by saying that she basically used bad words on Monday, Amy needs to reflect on the above three things she did that caused harm to her own reputation and career. After this, she can work to successfully repair the damage.

This article has been updated and modified from its original version—May 30, 2020.

Depression Is On The Rise With High Unemployment And Career Instability

3 Warning Signs That You Lack The Mental Strength To Lead

This Is The Most Important Question Leaders Ask During A Crisis

The Great Big Lie That Will Destroy Your Career Success

This Is How Felicity Huffman Will Restore Her Career After Scandal, And You Can Too