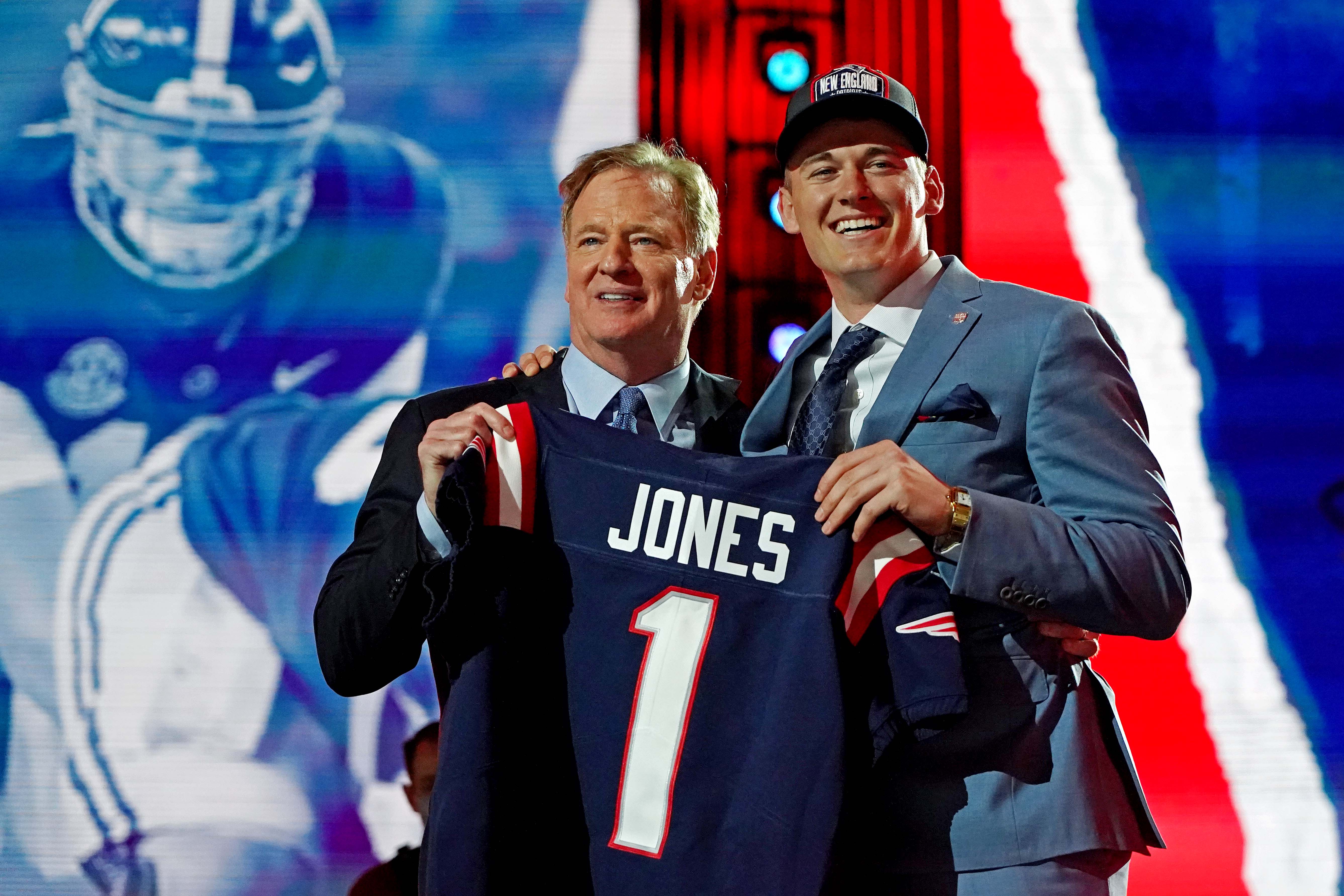 1.No. 1 overall pick Trevor Lawrence almost became an afterthought during the predraft process given he’d been pegged to go here since about 2018. Seeing him hoist that teal No. 16 Jaguars jersey was a visual reminder that it should be exciting to finally see him in the NFL – anchoring a talented, young team led by college coaching legend Urban Meyer. Don’t be surprised if Jacksonville is in the playoff mix in 2021.

1a. Lawrence became the first-ever Clemson player to be among the draft’s top three picks.

2. No. 2 overall pick Zach Wilson is the highest-drafted QB in Jets history … aside from Joe Namath, who went No. 1 overall in the 1965 AFL draft. During two drafts as NYJ GM, Joe Douglas has used all of his first- and second-round picks (a total of five) on offense, so here’s hoping Wilson gets a more legitimate opportunity to succeed than predecessor Sam Darnold did.

2a. Wilson became the first-ever BYU player to be among the draft’s top four picks.

2b. The Jets are the first team during the common draft era (since 1967) to draft quarterbacks in the top three during a four-draft span. Previous GM Mike Maccagnan took Darnold third in 2018.

3. But you have to wonder if the Jets – and every team drafting after Jacksonville that considered a QB – made a mistake by passing on Ohio State’s Justin Fields, who was rescued at No. 11 when the Chicago Bears snatched him. Lawrence and Fields had a bit of a Brady-Manning thing going since they were five-star high school quarterbacks in Georgia and later split a pair of meetings between the Tigers and Buckeyes in the College Football Playoff semifinals.

3a. Here’s hoping Fields pans out better than the five other quarterbacks the Bears have taken in Round 1 during the common draft era: Jim McMahon (1982), who was under center for Chicago’s only Super Bowl-winning team; Jim Harbaugh (1987); Cade McNown (1999); Rex Grossman (2003) and, of course, Mitchell Trubisky (2017).

NFL DRAFT GRADES:Bears, Jets among best team classes in 2021 while Raiders among worst

4. Third-rounders played the most games (474) among rookies in 2020. Good luck to you, Davis Mills, the Houston Texans’ controversial Round 3 choice … though not due to any fault of the former Stanford QB.

5. It took 14 hours and 52 minutes to complete all seven rounds.

6. Even though this was considered an offense-oriented draft – the first time the first seven picks were devoted to that side of the ball – more than half the players selected (133) play defense.

7. Of the 259 players drafted, 100 (38.6%) were underclassmen, including the first nine off the board and 14 of the first 16. Alabama WR DeVonta Smith, taken 10th overall by the Eagles, was the first senior picked.

8a. The eight quarterbacks selected through Round 3 were the most in draft history.

9. The Rams haven’t drafted in the first round since they took QB Jared Goff No. 1 overall in 2016. After trading Goff (and two more first-rounders) to the Lions for QB Matthew Stafford, LA isn’t scheduled to pick in Round 1 until 2024.

9a. With Goff and Stafford changing uniforms, none of the 22 QBs taken in Round 1 between 2009 and 2016 remain with the team that drafted them.

9b. Not only that, four first-round QBs chosen since 2017 have also washed out with their original club (Trubisky, Darnold, Josh Rosen and Dwayne Haskins).

10. After drafting seven defenders in 2020 and CB Jaycee Horn on Thursday, the Panthers selected the first offensive player of the Matt Rhule era in Friday’s second round, LSU WR Terrace Marshall Jr.

10a. New Carolina RB Chuba Hubbard should give Rhule’s wife part of his signing bonus as she texted her husband to draft the Oklahoma State product in Round 4. Hubbard burned Rhule’s former team, Baylor, for 171 yards and two TDs in 2019.

11. The Southeastern Conference had 65 of its players drafted – most ever for one conference in the common draft era – including 10 from Alabama and at least one from all 14 schools. It was the 15th consecutive draft that the SEC provided the most draftees.

11a. Four SEC wide receivers – LSU’s Ja’Marr Chase, Alabama’s Jaylen Waddle and Smith and Florida’s Kadarius Toney – were picked in Round 1, the first time that had happened for one conference.

12. More on the Crimson Tide: ‘Bama had eight players picked in the first two rounds, a record for a school in the common draft era.

12b. Never before had a school produced multiple first-round wideouts in consecutive drafts. But chalk up another first for the Tide after Smith and Waddle went in Round 1 one year after their former teammates Henry Ruggs III (Raiders) and Jerry Jeudy (Broncos) did the same.

13. Ohio State also had 10 players come off the board, including Fields in Round 1. However, with USC OL Alijah Vera-Tucker going to the Jets at No. 14, the Buckeyes and Trojans remain tied for the most total first-round picks during the common draft era with 72 apiece.

14. Among Power Five schools, only Kansas, Michigan State, Rutgers, Utah, Virginia and Washington State did not have players selected.

14a. The shutout of the Spartans marked the end of an 80-year streak of having at least one Michigan State player drafted.

15. Alabama’s Jones and DT Christian Barmore are the 11th and 12th players New England’s Bill Belichick has snatched from Nick Saban-coached teams. Going back to 1967, no other coaches have established a similar pipeline.

15a. Jones, the 15h pick, is the highest-drafted offensive player Belichick has selected since coming to the Patriots in 2000 … though he did grab FB “Touchdown Tommy” Vardell ninth overall for Cleveland in 1992 and C Steve Everitt at No. 14 in 1993.

15b. Jones is also the only QB Belichick has ever taken in Round 1.

15d. The Patriots have drafted 61 players since 2015 … but only one Pro Bowler – P Jake Bailey. Good luck to Jones, Barmore et al. as they attempt to change that. We’re confident in Nike the dog.

17.New 49ers QB Trey Lance threw 318 passes for North Dakota State, joining Mark Sanchez, Michael Vick and Cam Newton as first-round QBs over the last 40 years who threw fewer than 500 Division I passes. Could be a good harbinger given the other three led their teams to conference title games … though none won the Super Bowl.

18. No tight end in the common draft era has been selected earlier than the Falcons’ Kyle Pitts, who left the green room with pick No. 4. The former record holder was Denver’s Riley Odoms, the fifth pick in 1972.

19. Pitts, who chose No. 8, and Cardinals first-round LB Zaven Collins, who is sticking with No. 23, are among incoming players taking advantage of the NFL’s loosened restrictions on jersey numbers.

20. Long fearful of getting “fleeced” in eight previous drafts as a GM (with Carolina and New York), the Giants’ Dave Gettleman finally took the plunge and traded back – multiple times. He added first-, third- and fourth-round picks in 2022 for this trouble.

20a. Though it was humorous to see NFC East rivals Dallas and Philadelphia gang up on Gettleman with a first-round trade – the Cowboys were originally scheduled to pick 10th, followed by the Giants at No. 11 and the Eagles at No. 12 – that enabled Philly to get Smith. Gettleman immediately traded out afterward, paving the way for Chicago to get Fields.

21. The Jets selected two players named Michael Carter, ironically one a North Carolina product and the other from Duke.

22. It’s rare when wannabe QB Tim Tebow, who might come home to Jacksonville to play tight end for the Jaguars, gets so thoroughly and completely upstaged by a bona fide QB – but that’s exactly what happened when news emerged Thursday that league MVP Aaron Rodgers wants a divorce from the Packers. It’s a plotline that overshadowed the draft and seems destined to become the dominant NFL story of 2021.

23. Worst look on the draft periphery: Free agent QB Robert Griffin III throwing shade at ex-Washington teammate Kirk Cousins. “As you’ve seen, Cousins has been collecting checks there in Minnesota for a long time, taking them to 8-8, 9-7 seasons,” Griffin said on a Bleacher Report draft show. To that we ask, what exactly has RG3 been doing since 2013?

24. Best look on the draft periphery: First-round Steelers RB Najee Harris staging a draft party at the Bay Area homeless shelter where he spent a chunk of his youth. Tremendous.

25. With the 25th pick, the Jags took Clemson RB Travis Etienne – marking the first time a QB (Lawrence) and RB from the same college backfield were drafted into the same NFL backfield in Round 1 of the same draft.

25a. If only Meyer hadn’t let it slip that Toney, who went five picks earlier to the Giants, was the guy he really wanted – saying on ESPN’s draft telecast it “broke his heart.”

25b. Good luck with the arranged marriage, Travis …

27. Speaking of cultural fits, new Detroit coach Dan Campbell was merely looking for players willing to bite off opponents’ kneecaps. But sounds like second-round DT Levi Onwuzurike might go significantly further. “I like (bleeping) people up,” the Washington product said after his selection. “I like to get off the line and just put my helmet or my hands on an offensive lineman and (expletive) up an offensive scheme pretty much. I like pushing them back 2, 3 yards and just making them feel like (expletive).”

29. Nice job with this draft, Cleveland. Next year, on to Las Vegas, which was supposed to host the 2020 draft before COVID-19 precluded that. Forever a shame that Mekhi Becton, the Jets’ first-round pick last year, didn’t get to test his 6-7, 363-pound frame in one of the boats scheduled to whisk players from the draft’s red carpet stage through the fountains of the famous casino.

30. Ravens first-round DE Odafe Oweh had gone by his middle name, Jayson, while at Penn State and during the predraft process. No more. “My first name is Odafe,” he said. “I’m of Nigerian descent. People were having trouble pronouncing Odafe, so I went to Jayson my earlier years, but I don’t care anymore; you’re going to have to learn how to pronounce it.” Nicely done, Odafe.

31. Last – and almost least (sorry) – Buccaneers LB Grant Stuard, selected 259th, becomes the first “Mr. Irrelevant” selected by a Super Bowl champion since Andy Stokes (who?) was chosen by the Patriots in 2005.

32. We’re all here Monday … which must be such a relief to Kyle Shanahan!