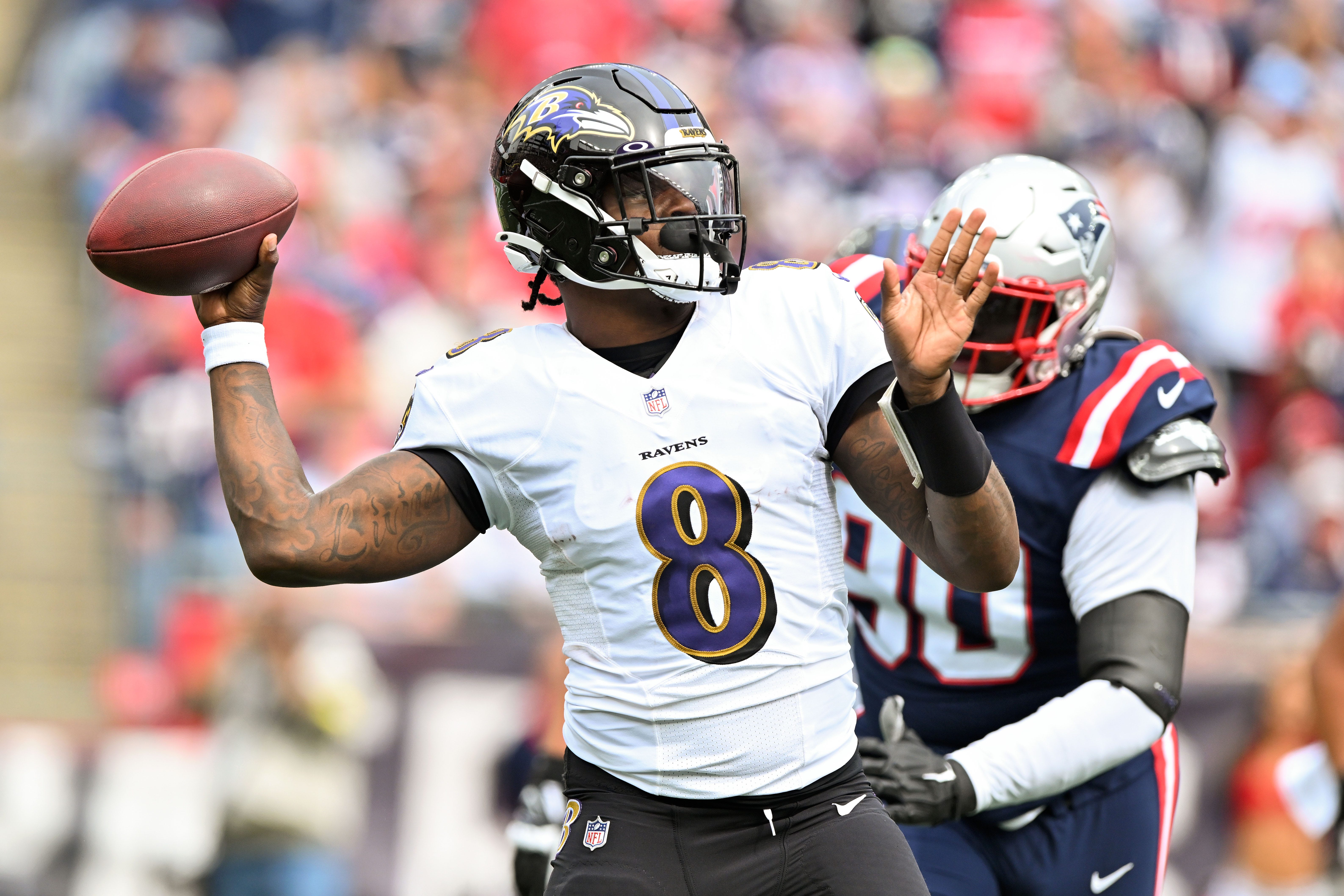 2. In that vein, the Atlanta Falcons, Carolina Panthers and reigning AFC champion Cincinnati Bengals are relieved to be off the schneid, all of them winning Sunday.

3. Ditto the Tennessee Titans, who effectively won an elimination game with the Las Vegas Raiders, who also began Sunday 0-2. Last season, Tennessee was the AFC’s No. 1 playoff seed, while Las Vegas earned a wild card.

NFL NEWSLETTER:Sign up now for exclusive content sent to your inbox

4. Dating back to their 2013 season at Fresno State, Raiders QB Derek Carr and WR Davante Adams have connected on a TD pass in 12 consecutive games. Might be the only thing that provides them solace given Vegas is now the league’s only 0-3 outfit.

5. Conversely, teams that sprint to 3-0 starts since 1990 have reached the postseason at a 74.4% clip, and 16 of them have gone on to win the Super Bowl – certainly good news for the Philadelphia Eagles, Miami Dolphins … and maybe the unbeaten New York Giants (2-0), who host the Dallas Cowboys on Monday night.

6. Former Alabama teammates Jalen Hurts and Tua Tagovailoa might just have the Eagles and Dolphins, respectively, on a Super Bowl collision course … even though both quarterbacks entered the season under intense scrutiny.

7. Former Alabama teammates DeVonta Smith and Jaylen Waddle are also emerging as huge reasons for the success in Philly and Miami, respectively. Both 2021 first-round picks went over 100 receiving yards Sunday and are flourishing even though their teams acquired No. 1 receivers in the offseason.

8. Worth noting the Fins were dominated on the stat sheet by the Buffalo Bills, the preseason Super Bowl darlings suffering their first loss of the season 21-19 despite outgaining Miami 497-212 and running 51 more offensive plays than the Dolphins.

9. Also worth noting the Dolphins have questions to answer after Tagovailoa returned to action despite suffering what appeared to be a first-half head injury that left him staggering on the field and held up by teammates. The NFL Players Association initiated a review of the team’s handling of Tagovailoa’s injury. Tagovailoa and coach Mike McDaniel characterized the injury as a lower-back issue, not one involving the QB’s head.

10. As for the already infamous “butt punt” from Miami veteran Thomas Morstead? It was the ugly way to reach the proper conclusion. Morstead could’ve taken a safety by more conventional – and less viral means – but the consequential free kick, which pushed Buffalo back to its own 23-yard line to start its final (failed) drive, was a key turning point in the Dolphins’ upset.

11. One other note on this game: Have we seen so many players spent by the South Florida humidity since the San Diego Chargers beat the Dolphins 41-38 in the old Orange Bowl in that 1981 playoff classic?

12. Battle of the GOATs? (Public service announcement here: There can only be one GOAT, so let’s stop throwing around the term.) That said, the Green Bay Packers’ Aaron Rodgers got the best of Tom Brady – decidedly the NFL’s GOAT – in the first matchup of players each sporting at least three league MVP awards. The Pack’s 14-12 escape act hardly delivered Gunfight at the O.K. Corral drama between a pair of epic passers – but should anyone really have expected aerial fireworks given the personnel issues these clubs are navigating?

12a. Rodgers and Brady combined for 526 yards and three TDs passing … though TB12’s inability to get a two-point conversion attempt off before the play clock expired ultimately doomed Tampa Bay’s comeback bid in the final seconds.

13. The New England Patriots had a season-high 447 yards of total offense in Sunday’s loss to the Baltimore Ravens, but QB Mac Jones hopped off the field at game’s end with what appeared to be a very painful ankle injury. If New England has to go with QB2 Brian Hoyer for any extended period, Bill Belichick and Co. are in serious trouble.

14. MVP frontrunner? Though Hurts has a claim, too, it might be Ravens QB Lamar Jackson, who’s now accounted for 12 TDs in three games after throwing for four and running for one in Sunday’s 37-26 defeat of the Pats.

14a. Jackson has also rushed for more than 100 yards in successive weeks and has done so a dozen times in his career, extending his own league record among quarterbacks.

14b. Lastly, on Sunday he became the first player during the Super Bowl era (since 1966) to rush for at least 100 yards and throw for at least three TDs in back-to-back games.

15. Lovie Smith Bowl? His old team, the Chicago Bears, didn’t seem to miss their former coach much in a 23-20 win over Smith’s Houston Texans. The Bears last reached the Super Bowl with Smith at the helm in 2006.

16. Carson Wentz Bowl? His old team, the Eagles, didn’t seem to miss their former quarterback at all in a 24-8 shellacking of Wentz’s Washington Commanders. The Eagles last reached the Super Bowl with Wentz under center in 2017 … for most of the season anyway.

16a. Wentz was sacked a career-high nine times by his former mates.

18. Rams star Aaron Donald collected his 100th career sack, a shoestring takedown of Cards QB Kyler Murray. Donald has averaged 0.77 sacks per game over the course of his nine-year career.

18a. Donald hit the century mark in just 130 games, making him the fastest interior lineman in league history to reach the benchmark.

18b. No other player has more sacks than Donald since 2014, the year he was drafted 13th overall.

19. If you needed a reminder that betting on NFL games should solely be done for entertainment purposes, hopefully you were entertained as the Indianapolis Colts, 5½-point underdogs in their own building and arguably playing the worst football in the league, somehow bowed up to beat the seemingly elite Kansas City Chiefs 20-17.

20. K.C. QB Patrick Mahomes threw his first interception of 2022 on his team’s final play to seal the win for Indy. Mahomes expressed his displeasure with offensive coordinator Eric Bieniemy regarding the Chiefs’ lack of urgency to get into field-goal position at the end of the first half, instead willing to let the clock run out while nursing a 14-10 lead.

21. Didn’t help at the end of the game when Kansas City DT Chris Jones was flagged for a 15-yard unsportsmanlike conduct penalty on what would have been a drive-killing sack to the Colts. Instead, Indianapolis’ march concluded five minutes later with a game-winning TD pass from QB Matt Ryan to rookie TE Jelani Woods – a score that only gave Mahomes 24 seconds to work with.

22. Line of the day: Chiefs RB Clyde Edwards-Helaire rushed seven times for 0 yards and a TD. (He added 39 receiving yards in a bid to mollify you fantasy owners.)

23. If only the “Hard Knocks” camera crews were around to document Detroit Lions coach Dan Campbell’s decision to take his foot off the accelerator late in Sunday’s game, opting for a (failed) 54-yard FG attempt with 74 seconds remaining and his team up by three. The Lions, who were 4-for-6 on fourth down in the game, surrendered the game-winning TD on the Minnesota Vikings’ ensuing drive. “I should have gone for it,” Campbell said afterward. “I just felt like, ‘You know what? Let’s kick the field goal. We go up by six and force them to score a touchdown for the win.'”

24. Early vote for Bears LB Roquan Smith, who “held in” amid a nasty contract dispute with Chicago’s front office this summer, as the NFC Defensive Player of the Week. Smith racked up 16 tackles against the Texans, but it was his interception of QB Davis Mills with 65 seconds to go that paved the way for the Bears’ game-winning field goal.

26. Panthers QB Baker Mayfield gets the nod over Saints counterpart Jameis Winston in a battle of former Heisman Trophy-winning quarterbacks … who could both soon find themselves back in the NFL’s transfer portal.

27. Through Sunday’s games, there have been 18 contests this season decided by a field goal or less – the most through the first three weeks of a season in NFL history.

28. Props to LA Chargers QB Justin Herbert for suiting up with those tender ribs … but he probably should’ve taken the week off. The rest of his team did in a 38-10 loss to the Jacksonville Jaguars.

29. Jacksonville QB Trevor Lawrence may be arriving. Touted as a generational prospect when he was taken first overall in the 2021 draft, Lawrence is playing his best professional football with five TD passes and no turnovers during his team’s two-game win streak.

30. How did we not focus on the hirsute aspect of the Jags-Bolts matchup? Props to the NFL’s social media warriors.

31. Days after the NFL announced Apple Music as Pepsi’s replacement for sponsorship of the Super Bowl halftime show, the league revealed the headline performer of Super Bowl 57: Rihanna. Should be quite a show – within the show – as she joins musical legends like Michael Jackson, U2, Prince, Bruce Springsteen, Beyoncé, Madonna, The Rolling Stones, Lady Gaga, Tom Petty, Bruno Mars, The Who and last year’s collaboration between Dr. Dre, Snoop Dogg, Eminem, Mary J. Blige and Kendrick Lamar as Super Sunday entertainment performers.

32. If the season ended today – it doesn’t – the Jaguars (2-1) would be AFC South champions and a No. 2 playoff seed. Talk about Urban renewal.