It was a drubbing.

Four years ago, the Missouri Democratic primary was one of the closest in the nation in the grinding and protracted campaign between Senator Bernie Sanders and Hillary Clinton.

On Tuesday, the state was called just moments after the polls had closed in favor of former Vice President Joseph R. Biden Jr. The early call represented the beginning of the second straight week of Biden victories. This week’s were so thorough that Mr. Sanders opted against even delivering a televised address to the nation.

“There’s no sugarcoating it,” Representative Alexandria Ocasio-Cortez of New York, a top Sanders surrogate, said in a livestream on her Instagram page. “Tonight’s a tough night.”

If Super Tuesday boiled down the primary to a two-man contest, then its smaller sequel made it plain that the race is now Mr. Biden’s to lose.

The results demonstrated the breadth of Mr. Biden’s sudden and enviable political coalition of black voters, women, older voters and white voters with college degrees. In Michigan, the biggest prize of the night and a state that Mr. Sanders carried four years ago, Mr. Biden was winning in urban areas, suburban areas and rural areas.

Mr. Sanders was on pace to win zero counties in Missouri and Mississippi. He lost Idaho, where he won in 2016. And Washington State, seemingly favorable terrain for Mr. Sanders, was too close to call.

Here are five takeaways from the results now that about 46 percent of delegates have been allocated:

Joe Biden has taken control of the primary.

Only three weeks ago, after a landslide loss in Nevada, Mr. Biden was struggling and Mr. Sanders was ascendant.

The race has inverted entirely since then.

A string of Biden victories across the Midwest and the South showcased the power of Mr. Biden’s political coalition, anchored first by black voters but now also winning over white voters in the suburbs and rural areas that four years ago made the primary between Mr. Sanders and Mrs. Clinton so competitive.

In Michigan, where Mr. Sanders had focused much of his attention in the last week, he was leading in none of the state’s 83 counties as of early Wednesday, and trailing Mr. Biden by double digits statewide. In Missouri, Mr. Sanders was also trailing in every single county in a state where he won dozens of counties in 2016. And in Mississippi, Mr. Sanders was getting thrashed, with Mr. Biden topping 80 percent of the vote.

The margin of black support for Mr. Biden over Mr. Sanders in Mississippi was breathtaking: 87 percent to 11 percent, according to the exit poll.

The calendar does not get significantly easier for Mr. Sanders in the next two weeks. Three of the four states that vote next week have sizable black voting populations: Illinois (a 28 percent black electorate in the 2016 primary, according to the exit poll), Ohio (20 percent) and Florida (27 percent).

Given Mr. Sanders’s struggles in Michigan on Tuesday, it is not clear why he would do significantly better in nearby Ohio and Illinois. Then the next week comes Georgia, where black voters made up half of the Democratic electorate four years ago.

But it was hardly just black voters lifting Mr. Biden. In Missouri, for instance, the story was about white voters who sided with Mr. Sanders in 2016 but backed Mr. Biden in 2020. Exit polls showed that Mr. Sanders led Mrs. Clinton by nine percentage points among white voters there; Mr. Biden was up by 12 points this year. 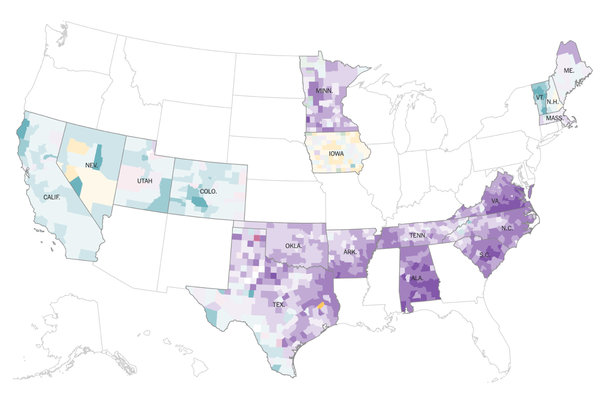 National Primary Results Map: Where Biden and Sanders Have Won

The wave of new and younger voters that Mr. Sanders has banked much of his candidacy on simply has not shown up.

The results were especially stark in Missouri.

Mr. Biden carried older voters with a colossal 81 percent support, an even bigger share than Mr. Sanders had among those under 30.

What had been Mr. Sanders’s early strength in a fractured field — his quick consolidation of younger voters, very liberal voters and Latinos — has proved far less formidable in a two-man contest as moderate and “somewhat liberal” voters have coalesced behind Mr. Biden.

And as Democratic strategists have preached for more than a year, the consolidation of black voters behind a single candidate provides an almost overwhelming advantage when trying to accumulate delegates.

Mr. Biden’s ability to win states in the South by huge margins — especially Alabama last week and Mississippi on Tuesday — has generated a delegate windfall.

In Alabama alone, the 36 more delegates that Mr. Biden netted were enough to offset the edge over Mr. Biden that Mr. Sanders had built in the first three states combined: Iowa (6), New Hampshire (9) Nevada (15). In Mississippi, Mr. Sanders was at risk of falling below 15 percent statewide.

For the second straight week, Mr. Sanders underperformed his own bar from 2016 (a race, it should be noted, he eventually lost).

He won Michigan then; he lost it now.

He nearly won Missouri then; he lost it decisively now.

He won Washington, North Dakota and Idaho in landslides then (all were caucuses four years ago); all were too close to immediately call on Tuesday night.

Mr. Sanders doing worse in 2020 than 2016 is not new. As the pro-Biden super PAC Unite the Country wrote in a memo this week, “on Super Tuesday, in every single state, Bernie Sanders earned a smaller share of the vote than he earned in those same states in 2016.”

Mr. Sanders had a legitimate excuse a week ago: The other leading progressive vote-getter, Senator Elizabeth Warren, was still in the race. But that argument melted away this week and his standing still did not improve.

The Democratic Party has decided.

In his speech to a mostly empty National Constitution Center (relocated to avoid a crowd because of fears surrounding the coronavirus), Mr. Biden not only thanked Mr. Sanders and his supporters but also offered an olive branch, saying, “There’s a place in our campaign for each of you.”

As the results rolled in, a growing number of Democratic officials began to both declare the primary over and consider the delicate task of uniting a party with deep ideological and generational divisions.

The two leading Democratic super PACs, Priorities USA and American Bridge, echoed each other Tuesday night as they announced in short succession that they believed Mr. Biden was now the de facto nominee.

“The math is now clear. Joe Biden is going to be the Democratic nominee,” said Guy Cecil, the chairman of Priorities. “The voices of Democratic voters are loud and clear: they want Joe Biden to be our standard-bearer,” said Bradley Beychok, president of American Bridge.

A top Biden backer, Representative James E. Clyburn of South Carolina, went even further in an interview on NPR, saying the Democratic National Committee should “shut this primary down” and “cancel the rest of these debates.”

But some of Mr. Sanders’s prominent surrogates and advisers were digging in, even as questions about the future of his campaign intensified as the Vermont senator opted against delivering a speech.

Briahna Joy Gray, the national press secretary for Mr. Sanders, wrote that moderates were “panicking” about a one-on-one debate and that “America finally gets to see Biden defend his ideas, or lack there of, on Sunday.” David Sirota, a longtime Sanders adviser, praised the benefits of “tough primaries” in molding a stronger nominee. “Don’t let anyone tell you otherwise,” he wrote on Twitter.

Michigan’s results hint at the depth of anti-Clinton sentiment in 2016.

Michigan has played a special place in the Sanders retelling of 2016: It was the state that, despite the polls, gave him a major victory over Mrs. Clinton and foreshadowed her eventual weakness in the general election in the upper Midwest against Donald J. Trump.

The results on Tuesday raised fresh questions about just how much of his 2016 primary victory there was about him — and how much was simply rejection of Mrs. Clinton.

Mr. Sanders was at risk of losing every one of Michigan’s 83 counties on Tuesday night. Four years ago, he carried 73 counties. While Mrs. Clinton carried black voters then, as Mr. Biden did now, the biggest difference was white voters, who swung wildly from backing Mr. Sanders in 2016 to Mr. Biden in 2020.

The role of gender was almost unavoidable. “Mansplain me on sexism again, dudes,” Anne Caprara, a top Democratic strategist and the current chief of staff for the governor of Illinois, J.B. Pritzker, said on Twitter. “Please.”

White men supported Mr. Sanders by a 25-point margin over Mrs. Clinton. Yet they favored Mr. Biden over Mr. Sanders on Tuesday. White women flipped a lot, too, delivering a majority for Mr. Biden after they had gone with Mr. Sanders in 2016.