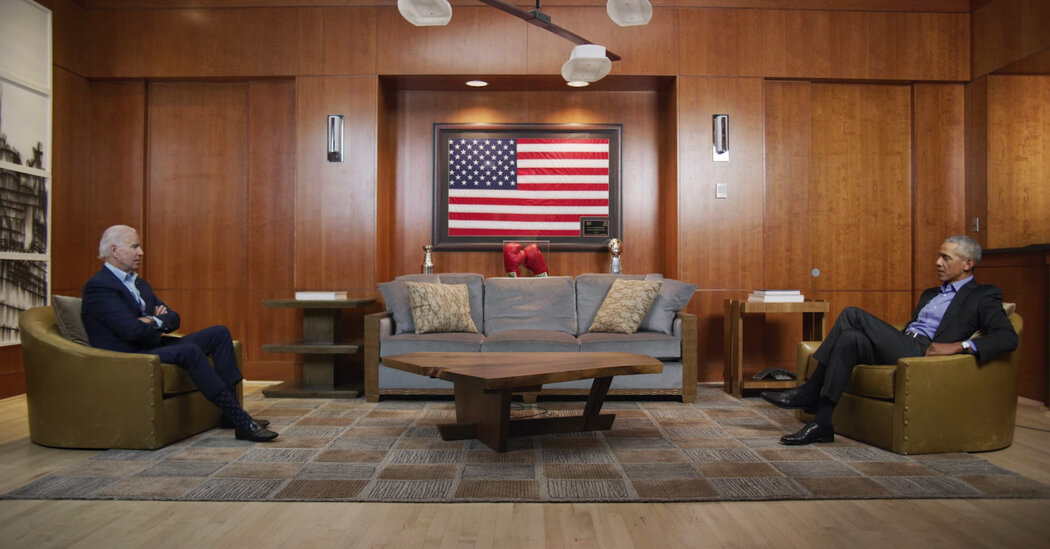 The coronavirus pandemic has been a boom time for TV reunions: “30 Rock,” “Parks and Recreation,” “Community” and more. On Thursday, the Joseph R. Biden campaign premiered a reunion of the West Wing — not the NBC drama, but the previous, pointedly low-drama presidential administration.

“President Obama and Vice President Biden: A Socially Distanced Conversation,” at just over 15 minutes, did not break the internet, or even dent it. It did not unveil new proposals or arguments. Instead, beginning with the two former partners stepping out of gleaming SUVs in masks but no ties, it traded in the currency of quarantine-era TV: nostalgia.

In teasers released on Wednesday, Mr. Biden and Barack Obama criticized — though not by name — President Trump as having little empathy and less sense of responsibility. “This guy,” Mr. Biden said, “ran by deliberately dividing people from the moment that he came down that escalator.”

The preview led to early buzz that the reunited duo was out to “troll” the Troller-in-Chief. The full video, however, was mostly collegial, relaxed, chill. Compared with the pro-wrestling standards of the current presidency, or the electric oratory of Mr. Obama’s campaigns, it was even boring.

Which, oddly, was the most interesting thing about it. The reunion’s reliable, the-adults-are-in-the-room placidity suggests how the Biden campaign might counter the agitating theatrics of his opponent.

Production-wise, the video was an upgrade over the Zoom-video visuals of many of Mr. Biden’s pandemic-era appearances. It had the sleek look and nimble editing of a Netflix talk show. It sat the two men across a generous wide-screen gap in a conference room, emphasizing their social distance — and thus, visually, contrasting with Mr. Trump’s less-than-consistent public-health practices.

It was part feather-soft interview, part Socratic walk-through of Mr. Biden’s campaign argument, part endorsement video. As Mr. Obama leaned casually back and Mr. Biden earnestly forward, it had the feel of a manager’s giving his No. 2 a pro forma review before recommending him for a promotion.

But the most jarring thing, for me, about the Biden-Obama video was that my first instinct was to call it “the Obama-Biden video.” It still sounds more natural, right?

And that gets at the risk and benefit to Mr. Biden of a video highlighting that connection.

On the one hand, Mr. Biden has not been shy, since the primaries, about reminding people of his connection to a popular ex-president. Mr. Obama can still attract attention as few public figures can. Their reminiscences about governing implied that Mr. Biden would not need on-the-job training. (There’s also value, during a Black Lives Matter moment that Mr. Biden has sometimes handled awkwardly, in reminding voters that he played backup to a Black president for eight years.)

On the other hand, there’s the possibility of making Mr. Biden the second banana in his own campaign production. Mr. Obama, comfortable and relaxed, had many of the pithier lines, talking about racial discrimination by saying that in a job application, “If your name is John, you might get called back; if your name’s Jamaal, you might not.”

It was a delicate balance, summed up in the still photo chosen for the video’s closing image: the two men, embracing under a blue sky, Mr. Obama’s face turned away from the camera, Mr. Biden’s turned toward it.

There was some very broad-stroke policy in the video — Mr. Biden’s economic message to “Build back better,” his pledge to add a public option for health insurance. But the video’s argument was about tone and media presence as much as it was about substance.

Like any nominee who would have run against an incumbent president and lifelong camera chaser, Mr. Biden has to figure out how to counterprogram Mr. Trump and capture attention. (Which means it’s an open question how much reach this video will have beyond Mr. Biden’s committed supporters.)

Inevitably, Mr. Trump will be a major character in any campaign against him. Here, he was “that guy,” trying to sledgehammer down the “starter house” of Obamacare. And as a five-decades-long figure of politics, Mr. Biden does not have the option of seizing the headlines as the exciting new thing, the way Mr. Obama did.

Instead, the video suggested, Mr. Biden’s campaign will make familiarity an asset, packaging him as TV comfort food. Like a quarantine-binged season of “The Office,” it’s something you’ve seen before, but you know what you’re getting. Like an episode of “This Is Us,” the Biden campaign may be corny and normie, but it understands the deep, mass-appeal pull of empathy and shared grief.

The president’s aesthetics tend toward either reality-TV showboating (that ride down the Trump Tower escalator) or, lately, authoritarian cosplay (the video of him and aides striding across a square cleared of protesters by tear gas). It’s an approach that guarantees attention, if not necessarily positive.

The Biden-Obama vibe, on the other hand, was business-conference casual, from the chummy tenor of the conversation to the tasteful furnishings and tchotchkes of the meeting room. (Framed American flag, boxing gloves in glass case, hefty books on end tables.) It felt a little like a stage discussion at a big-ticket ideas festival, with its talk about investment and partnership and listening to the experts.

That’s not the sort of thing that gets anyone worked up. But then again, that seemed to be the message of this video, which promised to restore a bygone tone and reset the country’s blood pressure.