Hi. Welcome to On Politics, your guide to the day in national politics. I’m Giovanni Russonello, your morning newsletter writer taking over your evening edition. 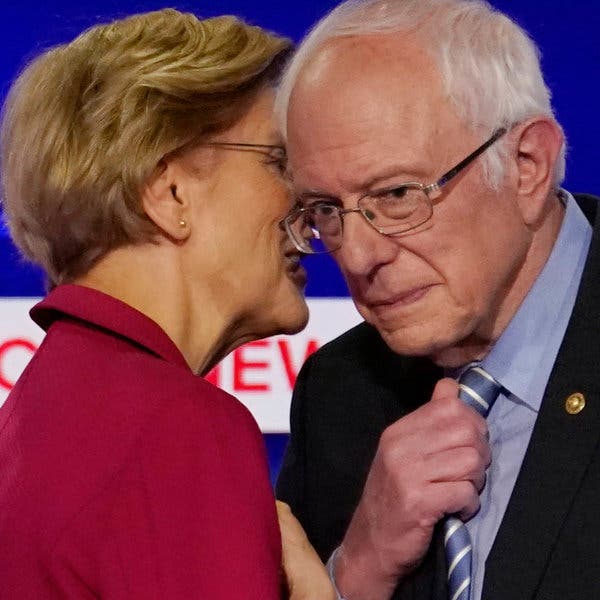 The presidential debate in South Carolina last night could have been a moment when Democrats finally teamed up to bring down Senator Bernie Sanders, the independent from Vermont and the front-runner for the nomination. Nobody managed to do it.

Senator Elizabeth Warren of Massachusetts might have been uniquely suited to take him on. Her sharp-tongued attacks inflicted the deepest wounds on Michael Bloomberg in last week’s debate, and she arguably commands the most credibility across the party’s rank and file; polls consistently put her at or near the top of the field in terms of net favorability among all Democratic voters, rivaled only by Mr. Sanders.

But on Tuesday, Ms. Warren again aimed most of her darts at Mr. Bloomberg, the former mayor of New York, whom she called the riskiest candidate against President Trump.

Every time she geared up for an attack on Mr. Sanders, she ended up delivering only a glancing blow. “Bernie and I agree on a lot of things, but I think I would make a better president than Bernie,” she said levelly.

“Bernie and I both wanted to help rein in Wall Street,” she continued. “In 2008, we both got our chance. But I dug in. I fought the big banks. I built the coalitions, and I won,” she added, then moved on without directly challenging Mr. Sanders.

Perhaps her harshest words for him came when she discussed the detailed plans she had released in November on how she would pay for and implement “Medicare for all.”

“Bernie’s team trashed me for it,” she said, probably a reference to the accusations of impurity she faced from the left for her version of the plan.

Mr. Sanders released details this week on how he would pay for his health care plan and other programs, though the document appeared to leave big chunks of his budget unfunded. Ms. Warren didn’t harp on those specifics at the debate, but said that Mr. Sanders’s plan “doesn’t show enough about how we’re going to pay for it.”

It was another delicate moment in an at-times-awkward relationship between two liberal senators, who share many of the same goals but are also competing for the same prize.

“There’s been no consistent distinction between her and him, and he seems to have the upper hand with the 35 or 40 percent of voters who are on the left,” Bob Shrum, a veteran Democratic strategist, said, adding that Mr. Sanders was “blocking her.”

The only other time Ms. Warren really took on Mr. Sanders — at last month’s debate in Iowa — was when she accused him of lying about expressing doubts that a woman could be elected president. It did little to blunt his rise, or help her increase her support. The collective response from the left was summed up by an aggrieved tweet from a leading progressive activist: “mom and dad are fighting and all I wanna do is go to my room and put my headphones on.”

Very liberal voters are a core part of Ms. Warren’s constituency, but attacking Mr. Sanders can risk alienating some of that base. Ms. Warren must also contend with the double standards women face when they show anger on the debate stage. And she and others have found out the hard way how vicious some of Mr. Sanders’s online supporters can be (sometimes to the point of harassment) when they believe a political opponent has crossed him.

Mr. Sanders has said he would have gladly stepped aside in the 2016 race if Ms. Warren wanted to run for president — a fact he has acknowledged this time around. They had met privately in late 2018, before either one had announced their intention to run in 2020, to discuss the upcoming race. (That was the meeting in which Mr. Sanders had expressed concerns about female candidates’ electability, Ms. Warren later said.)

But by 2020, he had already run for president once, and had cultivated a big and enthusiastic base of support, putting him at a financial and strategic advantage.

“I think, initially, she wanted to preserve the option of picking up his supporters,” Mr. Shrum said, referring to why Ms. Warren did not spring out of the gate with her target on Mr. Sanders.

To a degree, the left is indeed still split: Ms. Warren is clearly the second most popular candidate behind Mr. Sanders among liberals, according to national polls. In a recent Quinnipiac University poll, no other candidate got more than 10 percent in this group.

Apparently, the left is big enough to elevate two candidates at once, even if one of them has not yet won a state. Mr. Sanders and Ms. Warren are grappling for the top spot in some of the biggest states scheduled to vote next week on Super Tuesday — especially Massachusetts and California, and possibly Texas.

If former Vice President Joe Biden suffers a defeat on Saturday in South Carolina, Ms. Warren can look to overtake him in states like Texas, where most recent polls have put her in third place behind Mr. Biden and Mr. Sanders. The opposite, of course, can be true, too — a strong showing in South Carolina for Mr. Biden can garner him a wave of positive coverage, and help him argue that he is the alternative to Mr. Sanders.

“If Biden was reborn last night — if he wins South Carolina by a substantial margin — I think this may become a Bernie-Biden race,” Mr. Shrum said.

With the coronavirus outbreak threatening global health and markets, Michael Bloomberg’s presidential campaign will start telling voters in all 50 states tomorrow that the country is unprepared for a possible public health crisis, and that the fault lies with President Trump.

In its latest attack on the president, the Bloomberg campaign is seizing on an issue that is bringing a wave of anxiety to the country — and instantly assigning political blame.

The message: The ad uses clips from somber and stern news reports to make clear the sudden spread of the coronavirus, and its economic impact. Mr. Trump is said to be particularly concerned about the virus’s potential to further disrupt financial markets.

But, as with most of Mr. Bloomberg’s negative ads against the president, the message switches halfway through to paint Mr. Bloomberg as crisis-tested and able to lead through a public health emergency, and it uses post-9/11 imagery to drive home the point.

The takeaway: The ad will begin running the morning after Mr. Trump’s televised address on the virus on Wednesday evening. While news reports would very likely be replaying the president’s remarks, the ad from the Bloomberg campaign could inject an unfavorable message into the coverage of the Trump administration’s response.

But in running an ad on the global crisis, the Bloomberg campaign also runs the risk of appearing to exploit an epidemic, and all of the anxiety that accompanies it, for political gain.