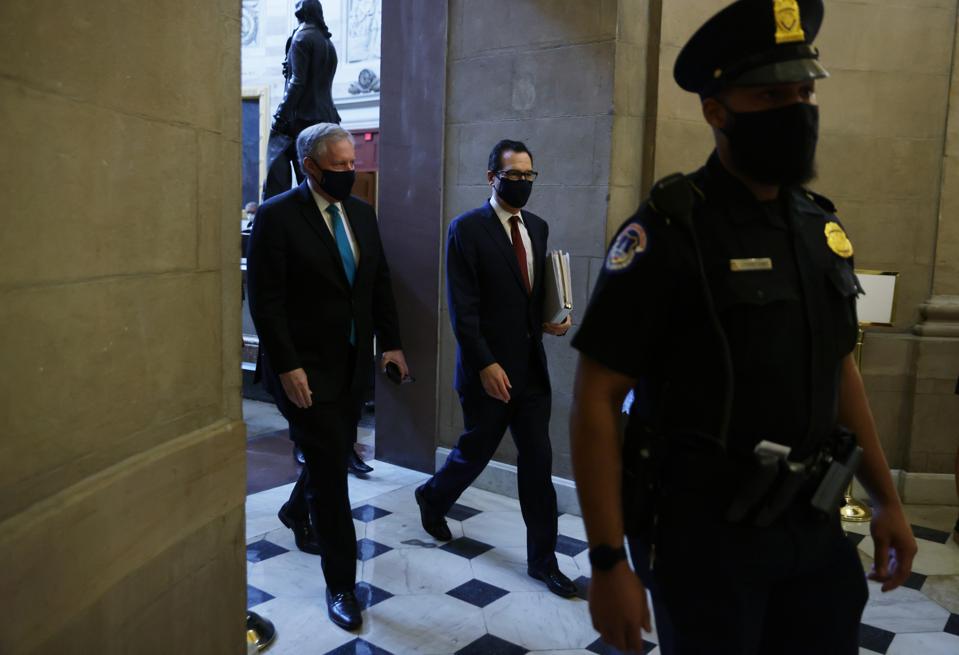 As negotiations between the White House and Democrats continue on the next stimulus package, it’s becoming increasingly likely that they will not meet the self-imposed Friday deadline for a deal.

For days, Treasury Secretary Steven Mnuchin and White House Chief of Staff Mark Meadows have been meeting with Senator Chuck Schumer (D-NY) and House Speaker Nancy Pelosi (D-CA) to try to get the two sides closer on the massive bill.

Politico shared a telling quote from Speaker Pelosi: “I feel optimistic that there is a light at the end of the tunnel, but how long that tunnel is remains to be seen.”

Perhaps she’s alluding to Secretary Mnuchin’s hopeful promise of a deal by Friday?

White House Chief of Staff Mark Meadows also said that “There are no top-line numbers that have been agreed to. We continue to be trillions of dollars apart.”

Those are not the quotes of negotiators who believe a deal will be done tomorrow.

Can they resolve their differences and come closer on trillions of dollars of difference in just two days?

Recall that there was also another self-imposed deadline last Friday, July 31st, which had come and gone without a deal. The same could easily happen tomorrow.

Just how far apart are the two sides now?

What Are The Differences?

The bill is massive and so there are a lot of differences – but which are the major differences?

One key area involves funding for the United States Postal Service. It is emerging as a surprising key battle in the negotiations, especially after movement on unemployment benefits. The USPS faces serious financial problems and there has been a slowing of mail service in some areas. This would be a big problem for November elections as many may opt to use of mail-in ballots over in-person voting during the pandemic.

The Cares Act allowed the USPS to take a $10 billion loan from the Treasury but has since the USPS requested $75 billion in funding. The Heroes Act, which the House of Representatives passed in May, would’ve given the USPS a $25 million grant and Democrats are looking to do the same in the next stimulus package. They recently conceded in negotiations and lowered that ask to $10 billion.

Finally, the Heroes Act increased Supplemental Nutrition Assistance Program (SNAP) benefits by 15% and Democrats are looking to get the same included in the next stimulus bill but Republicans are hesitant. SNAP benefits are used by low-income families to buy food and with food prices increasing, it’s an important financial benefit many families need.

Where Is There Agreement?

It’s not all bad news – there are several areas where the two sides have come closer together.

On the expired $600 per week in federal unemployment benefits, it appears that Republicans have offered $400 per week until December 15th. There were also Senator McConnell’s comments supporting the $600 per week benefits, so while there hasn’t been agreement, there’s been movement in the Democrats direction on this.

Another example is the $1,200 stimulus check. The proposal offered by Senator McConnell in the HEALS Act included a advance on a refundable tax credit of $1,200 for single filers earning less than $75,000 and $2,400 for joint filers earning less than $150,000. It added an additional $500 per dependent with no limit. If you made more than those income amounts, your check would be reduced by 5% of your adjusted gross income above those limits.

Finally, Republicans have offered, in negotiations, to extend the eviction moratorium to December 15th. The previous eviction moratorium, which prevented landlords from initiating eviction proceedings on renters in buildings that had mortgages secured by the federal government, expired last month.

Negotiators will continue to meet to try to reach an agreement. If they manage to reach a deal by Friday, it could be passed into law next week. If that is the case, then Secretary Mnuchin has said the stimulus checks could be issued in as soon as a week’s time.

The White House has also said recently that if Congress cannot reach a deal, the President may take executive action on extending unemployment insurance and an eviction moratorium as a short term fix. It’s not clear how he would do it though.

As for the scheduled August recess of the Senate that was to start tomorrow, Senator McConnell has already said that the Senate will stay in session next week and delay the recess.

How Soon Could You Get A Second Stimulus Check?