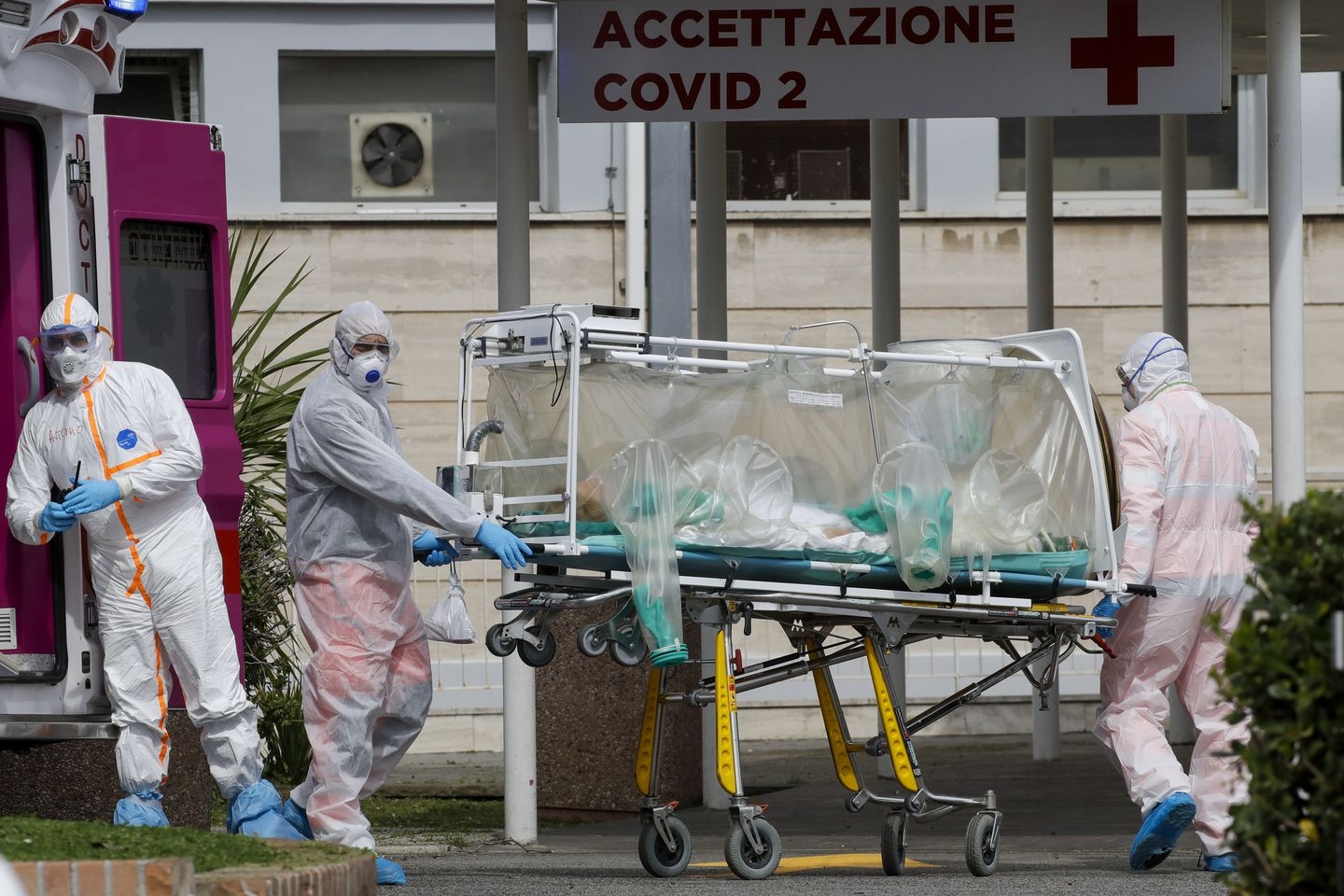 ~On Tuesday’s guest-hosting stint, I mentioned again the Chinese propaganda video showing a Chinese man in Florence inviting Italians to hug him. The increasingly censorious YouTube has no problem keeping this video up on China Global Television Network’s YouTube channel even though it kills people who follow its advice:

Not a lot of “social distancing”.

Partly in consequence of falling for evil Chinese propaganda aimed at politically correct rubes, over two thousand Italians are dead. I’ve said that, when it comes to the tedious cliché du jour of “flattening the curve”, I’m not really interested in the number of recorded “cases” of Covid-19. In the US the lack of test kits has been the worst failure of the CDC, so no one has a clue how many cases there really are. But, to one degree or another, the official number everywhere else, from China to Spain to Canada, is an underestimate. In Iran, the formal case count is a joke.

So the figure I’ve been tracking is the daily death count in Italy, the first western nation to be plunged into full-blown corona crisis. The toll per diem began to climb at the beginning of March: 5, 18, 41, 97, 168… Over the weekend, it passed the highest (official) number of 24-hour deaths released by China at the peak of its epidemic, and stood as follows:

So, instead of marching on to over 400 and 500 per diem, it appeared to have stabilized at around 350 deaths per diem. How stands the metric today? We’ll bring you the update right here a little after 6pm Central European Time – that’s 5pm GMT, 1pm North American Eastern.

So much for the faint glimmer of flattening.

~I joked on The John Oakley Show last week that I had a suit in Montreal I needed to pick up before the US/Canadian border is closed. Too late. The Maple Curtain is coming down.

The night of Macron’s speech to the nation, hundreds of thousands of French exited Paris and the cities for the relative haven of the provinces in the manner of occupied France’s 1940 exit to the relative freedom of the southern zone. But in this instance potentially spreading the virus to largely unaffected areas of the country. Similar to 80 years ago, every person leaving their home (to go to the shops, to walk the dog) must carry a downloaded exeat pass certifying on their honour the legitimacy of their sortie. Breach of the rules will incur a fine from 38 to 135 euros (£34 to £123). The interior minister warned gravely that 100,000 police would enforce the regulations, ‘the toughest in Europe’.

~Also on the radio I mentioned that NBC News had damned the President for racey-racey-racistly referring to Covid-19 as the “Chinese coronavirus”. This response is Trump at his best:

At the time of writing, 165 out of 200 or so countries have the coronavirus. 164 of those 165 countries got it from somewhere else. The 165th is China, which incubated the virus, unleashed it on the world, and then lied about it.

~For me the most important lesson to learn from the current crisis is a simple one: US corporations are addicted to China as too many unemployed Americans are to heroin and meth. We need to break the dependency. I’ve thought this for a long time and curse the faux “conservatives” who created it. Me last August, before the virus was loosed:

Somewhere along the way I quoted Senator Sanders’ assertion that China has “made more progress in addressing extreme poverty than any country in the history of civilization“. Almost everyone on the right objected to Bernie, but many seemed awfully confused as to the precise grounds. For the first half of the People’s Republic, Mao moved a lot of people out of extreme poverty by moving them into the graveyard instead: it’s now almost universally recognized that he piled up more corpses than either Hitler or Stalin. For the second half of the People’s Republic, Deng Xiaoping managed to persuade America to outsource its entire manufacturing industry to China, and thereby enable the first economically viable form of Communism. That has certainly lifted many millions of Chinese out of poverty, and a select few (generals, Politburo members) into billionaire status. It may serve the needs of the US stock market – Niall Ferguson dubbed the arrangement “Chimerica” – but I am not persuaded that it is in the interest of the American people. Which is one reason why I am in favor of the current “trade war”, even if it totally collapses the chimerical “Chimerica”.

Bring it on, baby. More on this in the days ahead.

~I’ll be back on telly with Tucker tomorrow night, Thursday. If you prefer me in non-visual formats, I’ll be here in audio only for another Clubland Q&A, taking questions live from Mark Steyn Club members around the planet this Friday at 4pm North American Eastern Time – that’s 8pm GMT, but do check local listings for your area. And for more audio delights, we’ll be launching our latest and very timely Tale for Our Time this weekend.

~We opened The Mark Steyn Club well over two years ago, and I’m thrilled by all those SteynOnline supporters across the globe – from Fargo to Fiji, Vancouver to Vanuatu, Surrey to the Solomon Islands – who’ve signed up to be a part of it. With exterior pleasures canceled across the map – shows, pubs, sports, movies, restaurants, non-grocery shops – those in search of strictly in-home diversions can find more information about our Club here – and, if you’ve a pal who might be partial to this sort of thing, don’t forget our special Gift Membership.

Sniffing Hair Through the Window