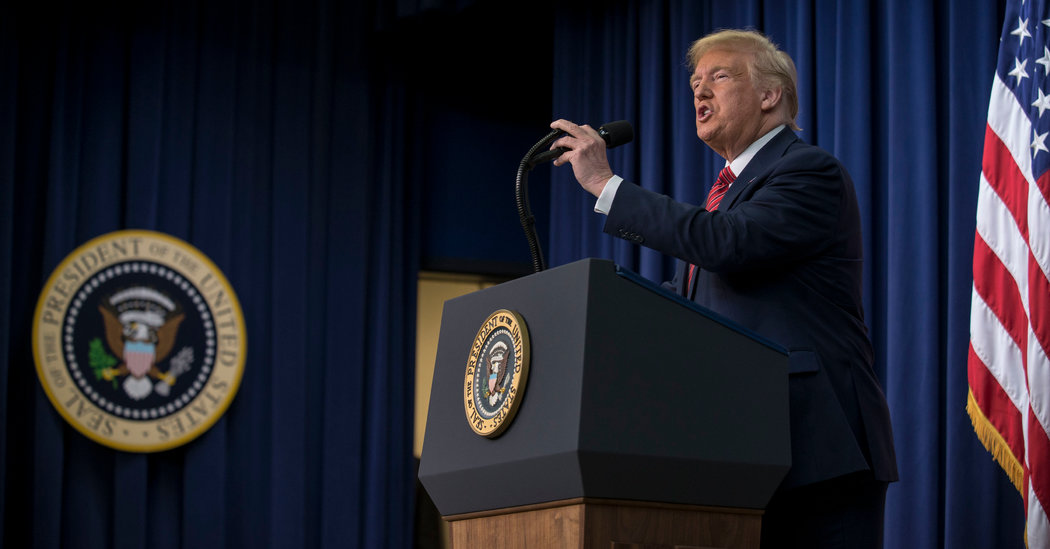 WASHINGTON — President Trump suggested in recent days that he had, in fact, learned a lesson from his now-famous telephone call with Ukraine’s president that ultimately led to his impeachment: Too many people are listening to his phone calls.

“When you call a foreign leader, people listen,” he observed on Geraldo Rivera’s radio show. “I may end the practice entirely. I may end it entirely.”

Mr. Trump has always been convinced that he is surrounded by people who cannot be trusted. But in the 10 days since he was acquitted by the Senate, he has grown more vocal about it and turned paranoia into policy, purging his White House of more career officials, bringing back loyalists and tightening the circle around him to a smaller and more faithful coterie of confidants.

The impeachment case against Mr. Trump, built largely on the testimony of officials who actually worked for him, reinforced his view that the government is full of leakers, plotters, whistle-blowers and traitors. Career professionals who worked in government before he arrived are viewed as “Obama holdovers” even if they were there long before President Barack Obama. Testifying under subpoena was, Mr. Trump has made clear, “insubordinate.”

The president’s eldest son, Donald Trump Jr., said on Twitter after the acquittal that the investigation was useful, in its own way, because it made it easier “unearthing who all needed to be fired.” The president and his staff have increasingly equated disloyalty to him with disloyalty to the nation. All of which makes for a volatile eight months ahead as Mr. Trump fights a rear-guard battle with his own government while facing off against Democrats on the campaign trail to win a second term.

“I think he feels like the people are out to get him, going overboard. I mean just put yourself in his shoes,” Senator Lindsey Graham, Republican of South Carolina and a staunch ally, told reporters this past week as the president railed on Twitter against Justice Department prosecutors. “There’s just a general frustration that the system is — there’s a double standard in the media and actually in the law.”

In the last week and a half, Mr. Trump has pushed out two witnesses who testified in the House inquiry, stripped a nomination from an official he blamed for being insufficiently loyal and assailed prosecutors, a judge and even the jury forewoman in the case of his friend Roger J. Stone Jr.

His national security adviser has just finished transferring more than 50 career professionals out of the White House and back to their home agencies. The president has brought back two of his earliest and most trusted aides, Hope Hicks and Johnny McEntee, as he retreats into a cocoon of his original 2016 campaign team. And more personnel moves are likely in the days to come.

Mr. Trump’s personal loyalty test now extends not to whether someone has worked in his White House since his inauguration, but to whether someone was part of his 2016 campaign and there from the beginning, according to interviews with more than a half-dozen administration officials and advisers to the president. His decision to turn the Office of Presidential Personnel over to Mr. McEntee, a 29-year-old aide who was once ordered marched out of the White House by John F. Kelly, the White House chief of staff at the time, was born out of concern about who is surrounding him, people familiar with the move said.

While some officials cited a lack of responsiveness from officials working in the personnel office, others said that Mr. Trump had taken to blaming them for appointments that he made, on the advice of other advisers. That included Gordon D. Sondland, the Republican donor he appointed ambassador to the European Union who became a key witness in the impeachment inquiry and has now been dismissed. It also included John R. Bolton, his former national security adviser, who plans to publish a book next month revealing Mr. Trump’s machinations about Ukraine.

In private conversations, Mr. Trump has complained bitterly that none of his enemies have been criminally charged, citing James B. Comey, the former F.B.I. director, and his onetime deputy, Andrew G. McCabe. Mr. Bolton in particular has been a source of his anger in several conversations, according to people familiar with what the president has said. He has accused Mr. Bolton of betraying him, and made clear his anger extends to anyone he believes helped Mr. Bolton.

Mr. Trump’s suggestion that he may bar government officials from listening into his phone calls with foreign leaders would reverse decades of practice in the White House. Presidents traditionally have multiple aides from the National Security Council and State Department monitor foreign leader calls to help interpret their meaning, record any agreements and inform relevant parts of government.

Mr. Trump, however, felt burned early on when transcripts of his calls with the leaders of Mexico and Australia were leaked to The Washington Post. During subsequent conversations with foreign leaders, he sometimes kicked out aides for more private talks and in the case of President Vladimir V. Putin of Russia even demanded that his own interpreter turn over notes of the discussion.

“He knows that anything even reasonably controversial out of his mouth, on the phone or off, will be reported out and construed in the most evil way possible,” Mr. Rivera, a friend of the president’s who interviewed him for his Cleveland radio show, said on Saturday. “As a result, he indicated to me that he’s dramatically scaling back” the number of people “looped into a state call.”

Going back to his days in the real estate business, Mr. Trump has long considered suspicion a key to success. “Be paranoid,” he advised in a motivational seminar in 2000. “Now that sounds terrible. But you have to realize that people, sadly, sadly, are very vicious. You think we’re so different from the lions in the jungle? I don’t know.”

Nor is presidential paranoia a new phenomenon even as Mr. Trump seems to have elevated it to a guiding philosophy of his White House. From Thomas Jefferson to Franklin D. Roosevelt to John F. Kennedy, other presidents turned at times to unseemly and even ruthless methods against their enemies like illegal wiretapping. Probably no previous presidents were as paranoid as Lyndon B. Johnson and Richard M. Nixon and in the latter case it helped bring down his presidency.

“The paranoid style is an old and recurrent phenomenon in our public life which has been frequently linked with movements of suspicious discontent,” as Richard Hofstadter, the famed midcentury American historian, wrote in his landmark 1964 essay, “The Paranoid Style in American Politics.” In Mr. Trump’s case, it connects with supporters suspicious of the elite.

John A. Farrell, a Nixon biographer, said most other presidents managed to contain or disguise their paranoid elements, but it drove Johnson and Nixon to extremes that were ultimately self-destructive. Mr. Trump, he said, sees no need to hide it.

“He has responded to criticism, opposition and other curbs on his power with a vulgar energy and the vile Nixonian strategy that making Americans hate each other is a potent way to seize and secure power,” Mr. Farrell said. “It is no accident that a president acting this way comes from a chain of influences that includes Roy Cohn and Roger Stone.”

Mr. Trump’s advisers and defenders turn to the old nostrum — just because he may be paranoid does not mean people are not out to get him. The relentless investigations against him, the Trump-bashing text messages by F.B.I. officials, the excesses of the surveillance warrant on a former campaign adviser, the longtime lawyer-fixer who turned against him, the whistle-blower who took his concerns to House Democrats, all of it, they said, has contributed to an understandable defensiveness.

“Trump came to office with an almost pathological distrust of others and an irresistible impulse to attack any perceived threat,” said Jonathan Turley, a law professor at George Washington University who testified against impeachment last year before the House Judiciary Committee. “The well-documented bias in the F.B.I. and Justice Department against Trump fuels his suspicions and tendency to counterpunch. Both his perceptions and his responses became more exaggerated.

“However,” Mr. Turley added, “his suspicions were validated to some degree in these investigations — something that many refuse to acknowledge. He came to Washington with an agenda that was highly antagonistic and threatening to the status quo. It was immediately clear that he faced deep opposition to his agenda.”

As with so many aspects of his personality, the seeds of Mr. Trump’s reaction may lie in his biography. Michael D’Antonio, the author of “The Truth About Trump,” recalled that the future president was raised by a father who taught him that all of life is a battle for power and that he should be a “killer.” Mr. Trump, Mr. D’Antonio said, came to see others as useful for his own purposes or obstacles to be crushed.

“In this way, he’s forcing us all to live in the world that once existed only in Trump’s mind and in his close circle,” Mr. D’Antonio said. “Here, in Trump’s America, we’re to believe that all institutions are corrupt. No one is to be trusted. Those who would speak against him hesitate. Words of protest and revelations that might be made by whistle-blowers are stifled by fear. This is the world Trump has always inhabited and he wants us to live there too.”