Welcome to Part Twenty-Six of the latest audio entertainment in our series Tales for Our Time: This month’s yarn of sailing and spying is an undoubted classic – The Riddle of the Sands by Erskine Childers. Michelle Dulak, a First Day Founding Member of The Mark Steyn Club, considers it a good pick:

Thanks, Mark, for choosing this one. I ran across it maybe a decade ago, and it was the last in a series of blows (Chesterton’s voluminous wartime writings were the first) to the old high-school-history line — featuring vexing chance, “entangling alliances,” scraps of paper, &c. — that had the Great War arriving out of the innocent blue, with no one more surprised than the Prussians themselves. In plain fact, nearly everyone expected war, though admittedly few could have expected the savagery made possible by such rapid technological development.

Indeed, Michelle. I did “Causes of the Great War” at school in history – for years, as I recall. There was no end of them, some with very deep roots. And, as I’ve often said, a century on we live still in the shadow of that conflict.

In tonight’s episode, our hero Carruthers has more pressing matters on his mind. He’s supposed to be heading back to his dull desk job at the Foreign Office in London, but he’s not yet ready to give up on the German Frisian Islands and the secret of the sands:

The train crept like a snail from station to station. I might, so a fellow-passenger told me, have waited three hours at Rheine for an express which would have brought me to Amsterdam at about the same time; or, if I had chosen to break the journey farther back, two hours at either Emden or Leer would still have enabled me to catch the said express at Rheine. These alternatives had escaped Davies, and, I surmised, had been suppressed by Böhme, who doubtless did not want me behind him, free either to double back or to follow him to Bremen.

The pace, then, was execrable, and there were delays; we were behind time at Hengelo, thirty minutes late at Apeldoorn; so that I might well have grown nervous about my connexions at Amsterdam, which were in some jeopardy. But as I battled out of my lethargy and began to take account of our position and prospects, quite a different thought at the outset affected me. Anxiety to reach London was swamped in reluctance to quit Germany, so that I found myself grudging every mile that I placed between me and the frontier.

Members of The Mark Steyn Club can hear Part Twenty-Six of our tale simply by clicking here and logging-in. Earlier episodes can be found here.

If you’re interested in where Carruthers is supposed to be going, well, he’s meant to be heading south from Norddeich down to Leer (just east of Groningen across the Dutch border), where he and his German minder will part company, and the Englishman will then continue across into the Netherlands and to Amsterdam on the western shore of the Zuider Zee. But will he? 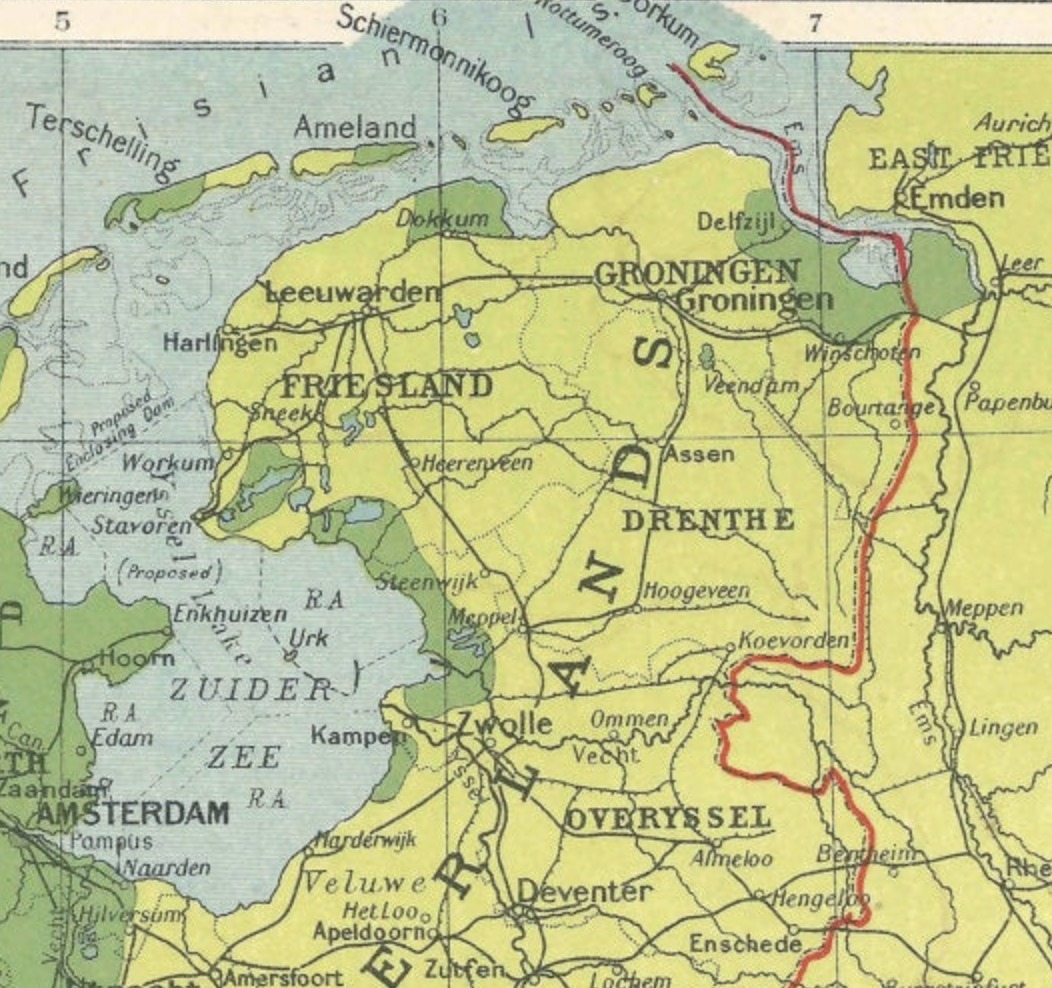 I’ll be back tomorrow evening with Part Twenty-Seven of The Riddle of the Sands. If you’re minded to join us in The Mark Steyn Club, you’re more than welcome. You can find more information here. And, if you have a chum you think might enjoy Tales for Our Time (so far, we’ve covered Conan Doyle, H G Wells, Conrad, Kipling, Kafka, Louisa May Alcott, Scott Fitzgerald and more), we’ve introduced a special Gift Membership that lets you sign up a pal for the Steyn Club. You’ll find more details here.