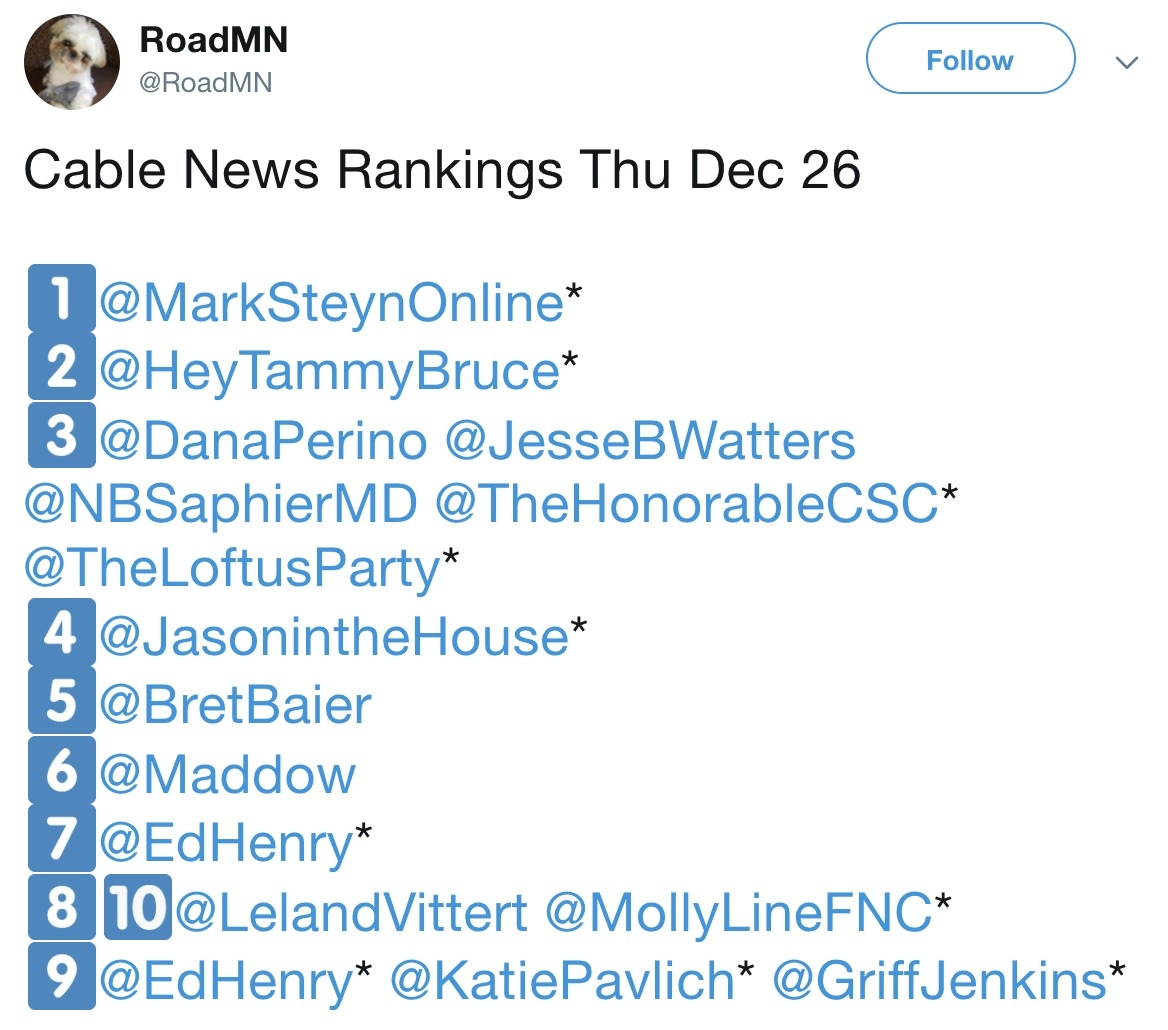 We hope you had a blessed and peaceful Christmas week and/or Hanukkah. In case you missed it, here’s how the last seven days looked to Mark:

~A se’nnight of Yuletide festivities began with this year’s edition of The Mark Steyn Christmas Show – a cavalcade of great guests, terrific music and triggering comedy sketches. Click below to watch:

After the attempted litigation and mediation of “Baby, It’s Cold Outside” above, Steyn felt he owed the song a proper consideration.

~Mark’s Monday Notebook rounded up Boris’ Hanukkah greeting, the curious state of the Trump impeachment, and the holiday plans of Vogue editors: it was our most read piece of the week.

Later Steyn joined Tucker Carlson to consider the Bernie bros’ plans to convert their parents and grandparents over Christmas dinner.

~On Christmas Eve Mark guest-hosted America’s Number One radio show, but figured the listeners had the best lines of the day.

With the midnight clear approaching, Steyn always reads a few seasonal tales – not just Dickens and L M Montgomery but Jack London with a brace of corkers about Christmas in the Klondike. You can enjoy them in the Yuletide after-glow with a grand old post-Boxing Day binge-listen. Tales for Our Time is made with the support of members of The Mark Steyn Club. For more on the Club, see here.

~On Boxing Day Steyn was out and about bright and early to join “Fox & Friends” and up late to guest-host “Tucker Carlson Tonight”. The latter started with the stalled impeachment…

…and concluded with the Democrats’ one-time dream candidate:

It was a Boxing Day bonanza for Mark ratings-wise – the Number One show in cable news, and the Number Two show in all cable. You can watch the full hour here.

In between the curvy couch and the anchor desk came Laura’s Links, in which Laura Rosen Cohen rounded up the best of the Internet from Baby Yoda-clad newborns to government-funded trans-strippers.

~On Friday Steyn returned to primetime for another hour on Tucker’s show. The lineup included not only the top cable-news quiz show Final Exam but a couple of culture-war stories. It seems Mrs Doubtfire is transphobic…

…and Little Women is too white:

You can watch the full hour here.

Much of what we do here each month, including Tales for Our Time, The Mark Steyn Show and Steyn’s Song of the Week, we also do live and on water on Mark’s annual cruises. We’re thrilled that so many have already signed up for next year’s Third Mark Steyn Cruise, with Michele Bachmann, Conrad Black, Douglas Murray and more. But, if you’re thinking about it, or perhaps have it in mind as a tardy Christmas present for an especially loved one, please don’t leave it too late. For more information, call +1 (770) 952-1959 if you’re dialing from beyond North America – and, if you’re calling from Canada or the US, it’s 1-800-707-1634. Or you can email your query here.

A new week of print, audio and video delights at SteynOnline begins tonight with our Song of the Week and continues tomorrow morning at 8am Eastern with Mark back on the curvy couch at “Fox & Friends”.