WASHINGTON — With typical gravity and a familiar “oyez, oyez, oyez,” the marshal of the Supreme Court announced on Tuesday morning that the justices had convened and, in keeping with ritual, she called on God to “save the United States and this honorable court.”

At the same time the justices were gathering by telephone to referee a constitutional dispute between the president and Congress, the Senate opened a hearing over live video to grill public health officials testifying remotely about the pandemic ravaging the country. At the White House, aides and reporters wearing masks were tested for the coronavirus — a swab in each nostril for three to five seconds — while the vice president kept away from the president.

American democracy in the coronavirus era has gone digital or at least more distant, however fitfully and incompletely. The outbreak that has upended daily life across the nation has now forced all three branches of government to adapt to a new stay-at-home, livestream reality, transforming technology-resistant institutions that have changed only marginally and grudgingly since their 18th-century origins and forcing them to rewrite their rules as other workplaces have had to do.

If gavels were out, Senator Lamar Alexander’s Cavalier King Charles spaniel, Rufus, was in, spotted lounging contentedly on a dog bed behind the Republican in a wood-paneled den as he kicked off Tuesday’s coronavirus hearing from his Tennessee home.

Viewers could hardly miss the Red Hot Chili Peppers poster on the red walls behind Senator Bernie Sanders, the socialist democrat from Vermont, while Dr. Stephen Hahn, the Food and Drug Administration commissioner, joined from an all-white blurred location with an otherworldly feel.

A few lawmakers did show up in person in the hearing room on Capitol Hill. For the most part they were unmasked but seated safely away from one another, although Senator Tim Kaine, Democrat of Virginia, made sure to cover up with his hard-to-miss multicolored bandanna making him look like a latter-day Wild West outlaw.

The nine Supreme Court justices remained out of sight, emphasizing the oral in oral arguments by sticking to an audio-only conference call as lawyers argued a couple of big cases. At least no one forgot to mute while flushing a toilet, as happened the other day during a telephonic court hearing. (“Doo process,” The New York Post called it.)

Mr. Alexander reflected on how much had changed in Washington in such a short time. Just a few months ago, he noted, the Senate was meeting as an impeachment trial court, all 100 members in the chamber, hour after hour, day after day, to decide whether to remove President Trump from office for high crimes and misdemeanors. “Now that seems like ancient Roman history,” Mr. Alexander said. 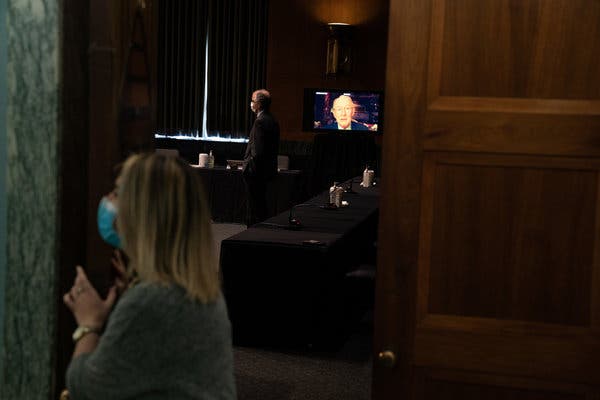 The ancient Romans, of course, never had Zoom. And neither has Washington until now. But the nation’s leaders have found ways to keep operating through all sorts of crises in its history, including war, natural disaster and, yes, disease.

In 1793, when a yellow fever epidemic swept through Philadelphia, then the interim capital, President George Washington and Congress relocated to Germantown, Pa. During the influenza pandemic of 1918-20, Congress barred visitors from the galleries and held mostly pro forma sessions without enough members to reach a quorum. At least three members of the House died of influenza or what was believed to be.

The government has carried on during conflict, too. In 1814, President James Madison and most officials fled Washington as British invaders arrived and burned the White House and the Capitol. Congress afterward considered moving back to Philadelphia but rebuilt the Capitol instead.

Congress continued to meet during the Civil War, World War I and World War II, although during the latter, one of the machine guns stationed on roofs around town to ward off feared German bombers accidentally went off and strafed the Lincoln Memorial.

On Sept. 11, 2001, congressional leaders were evacuated by helicopter in case of an attack on the Capitol while President George W. Bush was flown around the country by Air Force One to protect him. To safeguard the line of succession, Vice President Dick Cheney for months to come was regularly kept away from Mr. Bush in a “secure and undisclosed location” that, it turns out, was often his residence or Camp David.

But presidents, Congress and the Supreme Court are slow to change traditions in the face of threats. Even now, as federal health officials discouraged gatherings of more than 10 people, Congress has continued to vote in person, cycling members through the floor in small numbers. House leaders plan to introduce a new plan for proxy voting on Friday, two months after most of the rest of the nation went on lockdown.

“These are institutions that operate on precedent,” said Donald A. Ritchie, a Senate historian emeritus. “If they’ve done it before they’re comfortable doing it again. If they haven’t done it before, it takes a lot to jog them out of it.”

At the White House, Mr. Trump has resisted the advice his own government has issued, refusing to wear a mask and holding meetings and briefings in person. Only after his own personal military valet and Vice President Mike Pence’s press secretary, Katie Miller, tested positive last week did the White House finally start requiring masks of employees.

Mr. Trump and Mr. Pence are tested every day, as are those who come close to them. Three of the nation’s top public health experts are self-quarantining since they were in proximity to Ms. Miller. Mr. Pence has stayed away from Mr. Trump ever since.

“The vice president has made the choice to keep his distance for a few days,” said Kayleigh McEnany, the White House press secretary. “That’s his personal decision to make as to how many days he does it.”

As for Ms. McEnany, she walked into the briefing room to address reporters on Tuesday trailed by aides wearing masks but without one on herself, although she carried a blue one with a presidential seal on it. She said she did not need to wear it while briefing because she was not close enough to the reporters to be unsafe and she did not want to sound muffled.

“I’m an appropriate distance away,” she said, noting that she had tested negative for the virus.

All three branches were grappling with profoundly important issues on Tuesday despite the new way of doing business. Mr. Alexander’s Senate Committee on Health, Education, Labor and Pensions heard from public health officials about the pandemic, including Dr. Anthony S. Fauci, the director of the National Institute of Allergy and Infectious Diseases, who warned that reopening too quickly would risk a new wave of infections.

The Supreme Court heard oral arguments by telephone to referee a constitutional dispute between the president and Congress.Credit…Alex Wong/Getty Images

The Supreme Court heard oral arguments in two related cases involving Mr. Trump’s efforts to block subpoenas issued separately by House committees and Manhattan prosecutors seeking access to his business records and tax returns, perhaps the most important cases to define the extent of a president’s power to defy investigators since Watergate.

The justices, who unlike the White House and Congress have still never let television cameras into their chamber to record their operations, did allow the public to listen to them contemporaneously conduct the arguments by telephone, a notable step for the most media-shy branch of government that until the pandemic released recordings only after the fact.

Still, the technology occasionally seems to confound some of the justices, six of whom are over 65 years old.

Chief Justice John G. Roberts Jr. kept the proceedings moving at a brisk pace, calling on his colleagues to ask their questions in order of seniority and then cutting off lawyers for the competing parties when he decided it was time to move on. At one point, though, he called for Justice Clarence Thomas, the longest-serving member of the court, only to receive silence in response.

And so he called on the next justice in seniority, Ruth Bader Ginsburg.

If Justice Thomas was having trouble with his mute button, he eventually figured it out and was given another opportunity to pose his questions after Justice Ginsburg — itself a remarkable change given his traditional silence during in-person arguments.

The point, though, was to move on, to keep going, to make government work regardless of the challenges confronting it, whether epidemiological or technological. With more cases and more deaths each day, Washington is not ready to reopen in the way the president would like the rest of the country to, but neither is it content to close.

“It is a measure of the unprecedented deadly seriousness of the crisis, rather than any natural enthusiasm for change,” said Ira Shapiro, a former Senate aide and author of a couple of books on the institution, including most recently “Broken: Can the Senate Save Itself and the Country?” published in 2018. “Our leaders understand that the government needs to function, and the public needs to know that it is.”