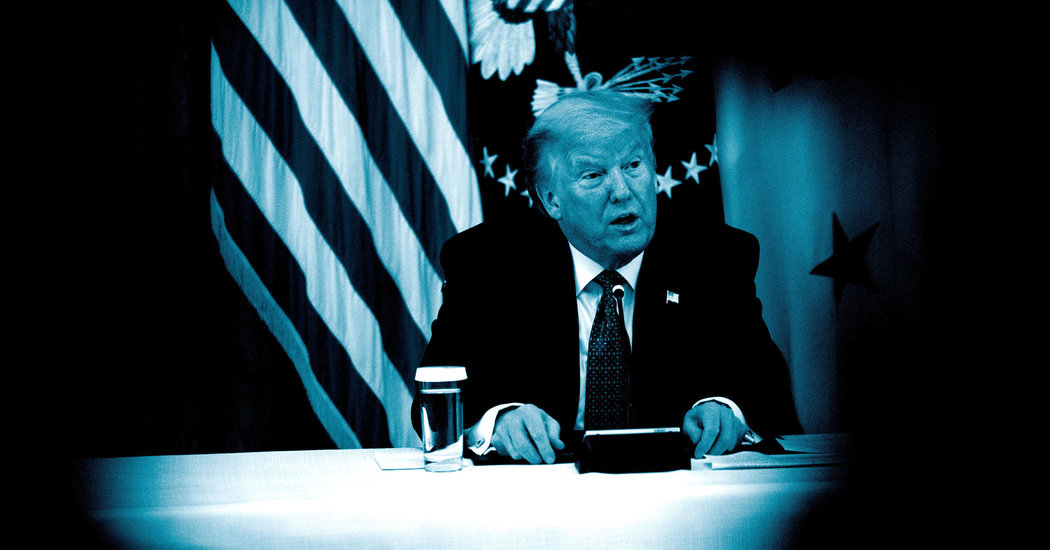 This article is part of the On Tech newsletter. You can sign up here to receive it weekdays.

If I went back in time to describe this week on the internet to the 2015 version of myself, I wouldn’t have believed it.

We’re in the middle of a pandemic, protests against police brutality are gripping the country, and the president of the United States and Twitter are battling it out.

President Trump said in a tweet early Friday that people protesting the death of an African-American man in police custody in Minneapolis could be shot if they looted.

Twitter responded by enforcing rules it has against “glorifying violence” and, for the first time, put the president’s tweet behind a warning label.

This happened days after Mr. Trump lashed out at Twitter for adding fact-checking notices (also for the first time) to two of his tweets that falsely claimed that mail-in voting ballots would mean that the November presidential election was “rigged.”

It is remarkable that Twitter is facing off against the president of the United States. (Will Oremus at OneZero has a back story from Twitter’s side. He reports that Twitter put Mr. Trump’s tweets through two different internal reviews before deciding to apply the label.)

And it’s remarkable that the leader of the free world threatened military violence against civilians.

Kevin Roose, a technology columnist for The Times, wrote that Trump’s Twitter tussle reminds him of the online message boards he frequented in the early 2000s. There were inevitably people who got heated and unruly, and then got angry when message board moderators tried to control their disruptive behavior.

“Looking at Mr. Trump as an aggrieved user of a fractious internet forum, rather than a politician making high-minded claims about freedom of speech, clarifies the dynamics at play here,” he wrote.

Sigh, Norm. I hear you. I also have flipped open Netflix and Amazon Prime Video outside the United States and felt disappointed that a bunch of stuff was missing.

The reason is mostly the same as why you need a flow chart to watch TV: money.

Companies that own TV shows and movies often sell the rights to watch them separately in each country. You can’t watch the CBS digital series “Star Trek: Discovery” on CBS online outside the United States because CBS sold the international rights to Netflix. Yes, it’s confusing!

This made more sense in the days when we watched stuff on TV or in movie theaters, and it feels antiquated at a time when there doesn’t need to be a difference between a Netflix viewer in Boise or in Bogotá. But old entertainment industry habits die hard, especially when a company can make more money selling each show separately in each country.

You could argue that because someone like Norm signed up for Netflix or Hulu in the United States, he should have access to all the same stuff no matter where he travels. That’s mostly not how it works. Yes, it’s annoying!

My colleague Ed Lee pointed out to me that there’s another reason for the many restrictions — geography and otherwise — on entertainment programming online: Companies are worried about getting ripped off.

Disney paid big money to make “Frozen” movies, and companies pay a fortune for the chance to sell you digital access to N.F.L. games. No one wants you to find a sneaky way to watch without paying.

We want to hear from you. Tell us what you think of this newsletter and what else you’d like us to explore. You can reach us at [email protected]