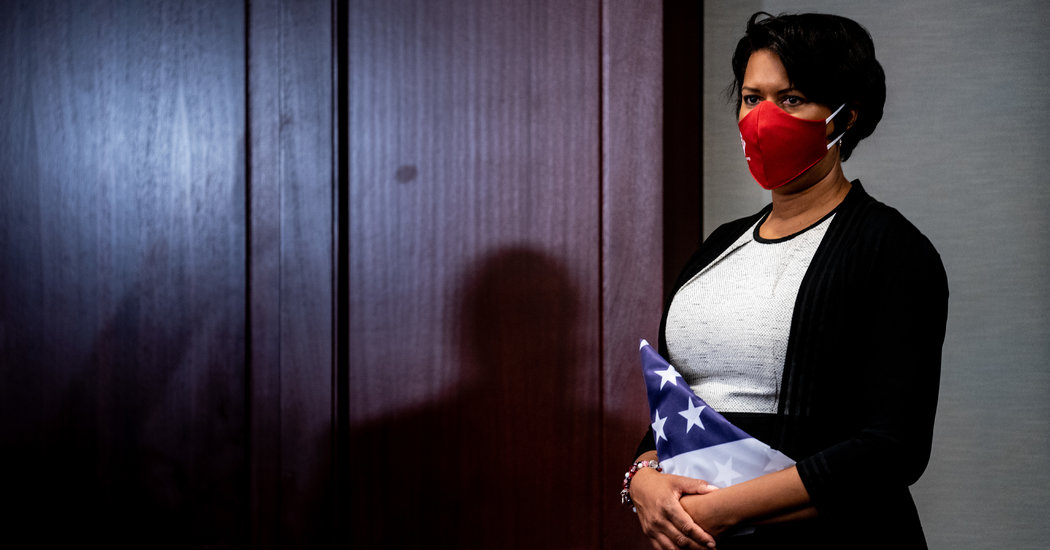 WASHINGTON — Democrats announced on Tuesday that the House would vote this month on statehood for the District of Columbia, capitalizing on anger over the Trump administration’s handling of racial justice protests in the nation’s capital to set the first vote on the issue in more than a quarter-century.

The movement to transform the nation’s capital into the 51st state has been galvanized in recent months by the new Democratic majority in the House, where more than 200 Democrats have signed on to the statehood legislation, now scheduled for a June 26 vote.

But the Trump administration’s use of federal officers in the District to respond to protests over the killing last month of George Floyd in police custody in Minneapolis has intensified calls for the nation’s capital to be given the same rights — including voting representation in Congress — that all 50 states have.

“Over the past few weeks, we saw further examples of why the District of Columbia’s lack of representation in Congress is so damaging,” said Representative Steny H. Hoyer of Maryland, the majority leader. “We are the only free nation in the world whose capital doesn’t have voting representation in their parliament.”

Because Congress retains so much control over the District, its mayor, Muriel Bowser, had few options this month when President Trump and his administration flooded the streets of Washington with National Guard forces from elsewhere and troops in riot gear, as well as violently clearing protesters out of Lafayette Square outside the White House.

For decades, residents of the District of Columbia — a majority-minority city of 700,000 whose license plates read “Taxation Without Representation” — have felt the detrimental effects of not being part of a state.

In the $2.2 trillion stimulus law enacted in March to blunt the economic pain wrought by the coronavirus crisis, the District received a small fraction of the funds doled out to states because it was treated as a territory, in defiance of custom that usually accommodates funding for its residents as if they lived in a state. That was the case even though it had a high number of cases and a large minority population, which data shows is more profoundly affected by Covid-19.

“This deprivation of statehood is unjust, unequal, undemocratic and unacceptable,” Speaker Nancy Pelosi said at a news conference announcing the vote, where she recalled how her father, Thomas D’Alesandro Jr., who represented Maryland in the House and led the Appropriations panel that controlled the District’s budget, was once considered “the unofficial mayor of Washington.”

“He did not agree with that,” Ms. Pelosi said.

The legislation put forward by Eleanor Holmes Norton, the District’s nonvoting delegate to the House, would establish the State of Washington, Douglass Commonwealth, and allow for it to have two senators and a voting representative. The federally controlled district would be reduced to the National Mall, the White House, Capitol Hill and some other federal property, leaving the rest of the land for the new state.

“Three generations of my family have yet to attain the votes Americans take for granted,” Ms. Norton said, reflecting on her family’s roots in the district. “Statehood is priceless. Statehood assures that living in the nation’s capital is about pride, not prejudice.”

The legislation is expected to pass the Democratic-led House, which would mark the first time any chamber of Congress had given approval to D.C. statehood legislation. But because the District is overwhelmingly Democratic, support has fallen along starkly partisan lines. The bill is unlikely to be taken up by the Republican-led Senate, where Senator Mitch McConnell of Kentucky, the majority leader, has called the statehood push “full-bore socialism.”

Activists who have long pressed for statehood for the District of Columbia cheered the plans for a House vote.

“For over 200 years, D.C. residents have been denied access to the basic features of democracy, and this vote is one step toward righting that wrong,” said Stasha Rhodes, campaign director of the pro-statehood group 51 for 51. “Last week, we saw how easily President Trump mobilized militarized attacks against peaceful protesters in D.C., underscoring the urgent need for D.C. residents to have their own voice and their own state government.”