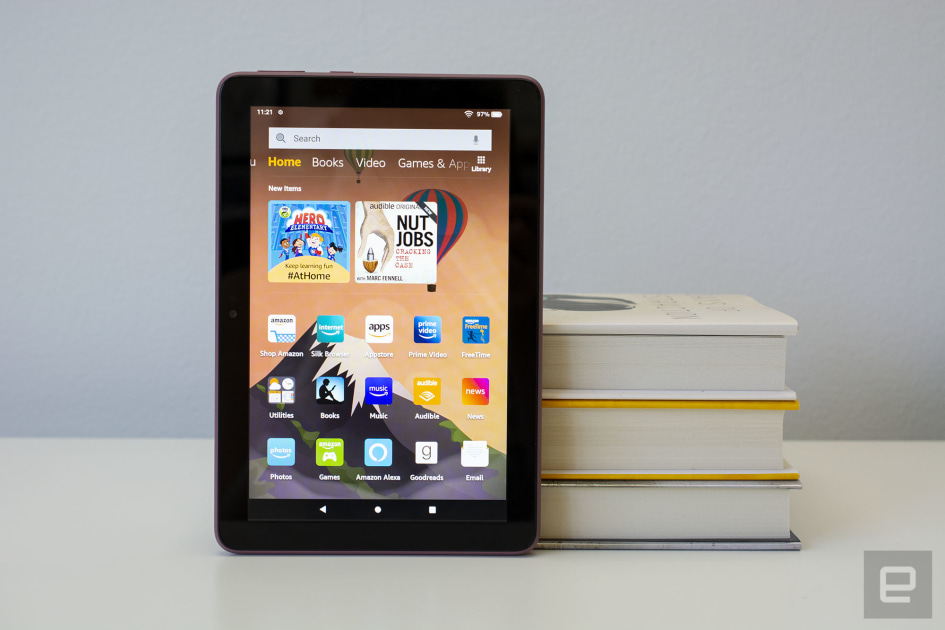 The Fire HD 8 and HD 8 Plus tablets came out earlier this year and are the newest of the bunch. Amazon essentially took many of the updates it brought to the Fire HD 10 and included them in the new Fire HD 8 tablets. These include a a more refined design with slightly slimmer bezels and USB-C charging. Both have 8-inch 1280 x 800 pixel displays, quad-core processors, dual speakers, headphone jacks and front- and read-facing cameras as well. Amazon updated the processor so the performance is better than the previous 8-inch Fire tablets, although there remains some lag when switching between apps.

The Fire HD 10 is a bit larger and a bit more powerful. It has a 10-inch 1080p display and an oct-core processor, but it has the same USB-C charger and roughly 12-hours of battery life that the Fire HD 8 tablets have.

Fire tablets work best as couch devices — slabs that you primarily use to watch videos, read books via the Kindle app, play mobile games and browse the web using a screen that’s larger than the one on your smartphone. They also have a feature called Show Mode which essentially lets you use the tablet as a makeshift Echo Show, calling upon Alexa using only voice commands (this works best if you have a stand or some other way to prop the tablet up).

The biggest drawback is that Fire tablets run a limited version of Android, which means no native Google apps. While some clones exist in Amazon’s own Fire app store, you won’t be able to easily download apps like Gmail, YouTube and others. If you can live with that, Fire tablets can make excellent basic tablets for both adults and kids.