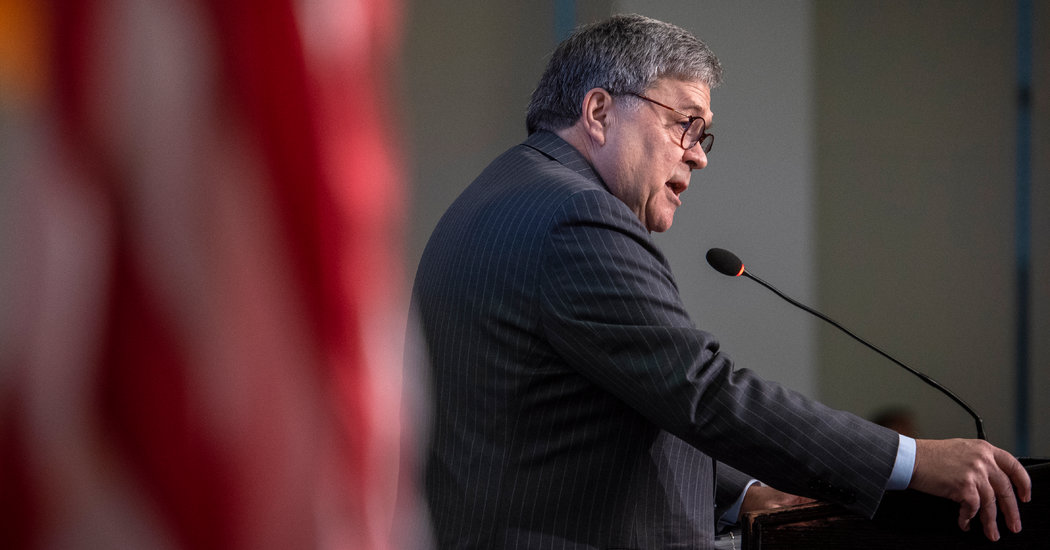 WASHINGTON — While Attorney General William P. Barr asserted his independence from the White House this week, he has also been quietly intervening in a series of politically charged cases, including against Michael T. Flynn, President Trump’s former national security adviser, people familiar with the matter said on Friday.

Mr. Barr installed a phalanx of outside lawyers to re-examine national security cases with the possibility of overruling career prosecutors, a highly unusual move that could prompt more accusations of Justice Department politicization. The case against Mr. Flynn, who twice pleaded guilty to lying to the F.B.I. in the Russia investigation, is a cause célèbre for Mr. Trump and his supporters, who say the retired general was ensnared in a “deep state” plot against the president.

The disclosures came as Mr. Trump made clear on Friday that he believes he has free rein over the Justice Department and its cases, rejecting Mr. Barr’s public demand of a day earlier that the president stop commenting on such cases.

Citing Mr. Barr’s assertion in an interview on Thursday that Mr. Trump had never asked him to act in a criminal case, the president declared on Twitter: “This doesn’t mean that I do not have, as President, the legal right to do so, I do, but I have so far chosen not to!”

Hours later, the Justice Department told defense lawyers for Andrew G. McCabe, the former acting F.B.I. director whom Mr. Trump has vilified for his role in the Russia case, that Mr. McCabe would not be charged in connection with a leak case, ending a nearly two-year criminal investigation.

“We consider the matter closed,” the department wrote to Mr. McCabe’s lawyers.

Together, the developments send conflicting signals at a time when the Justice Department’s independence from political interference by the White House has come under sharp scrutiny.

Mr. Barr publicly challenged Mr. Trump after the turmoil this week over the case against Roger J. Stone Jr., Mr. Trump’s longtime friend and political adviser, threatened to erupt into a full-blown crisis.

After prosecutors recommended on Monday a seven- to nine-year sentence for Mr. Stone on seven felony convictions, the president criticized the move. Senior law enforcement officials overruled the career prosecutors the next day, immediately prompting accusations of political interference.

Though Mr. Barr said that he had intended to intervene to ask a judge to impose a more lenient sentence, he also said that Mr. Trump had complicated his plans by creating the specter of political tampering and that the president’s commentary was making his job “impossible.”

The four prosecutors involved in the case out of the U.S. attorney’s office in Washington quit it.

Mr. Stone’s lawyers filed a sealed motion on Friday seeking a new trial, which could delay his sentencing scheduled for next week. It came a day after Mr. Trump alleged juror bias in Mr. Stone’s trial.

Mr. Barr installed the outside lawyers at the start of February and put them in a position to second-guess decisions on those cases, people familiar with the office’s workings said. Among the outsiders were Jeff Jensen, whom Mr. Trump appointed as the United States attorney in St. Louis in 2017, and aides to Jeffrey A. Rosen, the deputy attorney general.

Mr. Barr’s intervention was described by multiple people who spoke on the condition of anonymity to discuss the delicate internal deliberations. The Justice Department declined to comment.

The attorney general has also recently installed a personal aide, Timothy Shea, as interim U.S. attorney in Washington. Mr. Barr had previously maneuvered to get the former U.S. attorney there, Jessie K. Liu, to leave her position earlier than she had planned, creating a vacancy.

The outside officials have begun grilling line prosecutors in the Washington office about various cases — some of which are publicly known, and some of which are not — including investigative steps, prosecutorial actions and why they took them, according to the people.

Among the most politically charged is the case against Mr. Flynn, which Mr. Jensen is said to now be overseeing. Mr. Flynn’s case had been developed during the Russia investigation by the office of the special counsel, Robert S. Mueller III, and was handed off to the U.S. attorney’s office in Washington after Mr. Mueller completed his investigation.

Mr. Flynn’s defense lawyers, led by Sidney Powell, had urged Mr. Barr to intervene in the case, accusing the special counsel’s prosecutors of being corrupt. In June, shortly before she officially became Mr. Flynn’s lawyer, Ms. Powell wrote to Mr. Barr to suggest that new prosecutors review the case, expressing her “fervent hope that you and the Department of Justice will use this case to restore integrity and trust in the department.”

Though the president fired Mr. Flynn, Mr. Trump has long derided the case against him, wishing him luck on Twitter, praising Ms. Powell and calling the case a “disgrace.”

Ms. Powell has hurled waves of unsubstantiated charges of prosecutorial misconduct, hoping to derail the case against her client. The judge in the case, Emmet G. Sullivan, rejected them and refused to hold prosecutors in contempt as Ms. Powell demanded, later prompting Mr. Flynn to seek to withdraw his guilty plea. In the latest salvo, prosecutors again slapped down Ms. Powell’s accusations of government malfeasance.

“The defendant relies on allegations that do not pertain to his case, that the court already rejected, and that have no relevance to his false statements to the F.B.I.,” prosecutors wrote in a filing on Wednesday.

That filing provided no public indication that Mr. Jensen was playing a role behind the scenes in the case, or whether he had reviewed its text and permitted the prosecutors to file it.

Prosecutors had initially sought zero to six months in prison for Mr. Flynn, then softened their tone and said they would not oppose the lowest end of that range — probation instead of prison. That shift came in late January, before the change in the Washington office’s leadership.

Amid the heightened scrutiny of the Justice Department, the timing of officials’ decision to end their long-running investigation into Mr. McCabe without charges was striking.

Prosecutors in the Washington office told Mr. McCabe’s lawyers of their decision on Friday morning, the lawyers, Michael R. Bromwich and David Schertler, said in a statement.

“We said at the outset of the criminal investigation, almost two years ago, that if the facts and the law determined the result, no charges would be brought,” they said. “We are pleased that Andrew McCabe and his family can go on with their lives without this cloud hanging over them.”

Mr. McCabe’s case centered on whether he made a false statement to the department’s inspector general about a disclosure to reporters regarding an investigation into the Clinton Foundation. Mr. McCabe, working through the F.B.I. press office, had authorized a spokesman and a bureau lawyer to speak to a reporter to rebut allegations that he had slowed the inquiry, when in fact he had pushed to protect it.

Mr. McCabe’s lawyers had denied that he intentionally lied to the inspector general investigators. In September, Justice Department officials told Mr. McCabe’s lawyers that they had rejected a last-ditch appeal to not charge him. Why the case lingered for months without a decision is unclear.

Also on Friday, Judge Reggie B. Walton of the Federal District Court for the District of Columbia, who is presiding over a lawsuit seeking F.B.I. documents related to Mr. McCabe’s firing in 2018, unsealed the transcript of a September closed-door meeting with prosecutors.

Noting that prosecutors had said weeks earlier that a decision about charging Mr. McCabe could come “literally within days,” Judge Walton chastised them for stringing along Mr. McCabe and noted Mr. Trump’s comments about Mr. McCabe with disapproval, saying they created the appearance of a “banana republic.”

“I don’t think people like the fact that you got somebody at the top basically trying to dictate whether somebody should be prosecuted,” the judge said, adding that even if Mr. Trump’s moves are “not influencing the ultimate decision, I think there are a lot of people on the outside who perceive that there is undue, inappropriate pressure being brought to bear.”

Reporting was contributed by Katie Benner from Washington, Maggie Haberman from New York and Matt Apuzzo from Brussels.