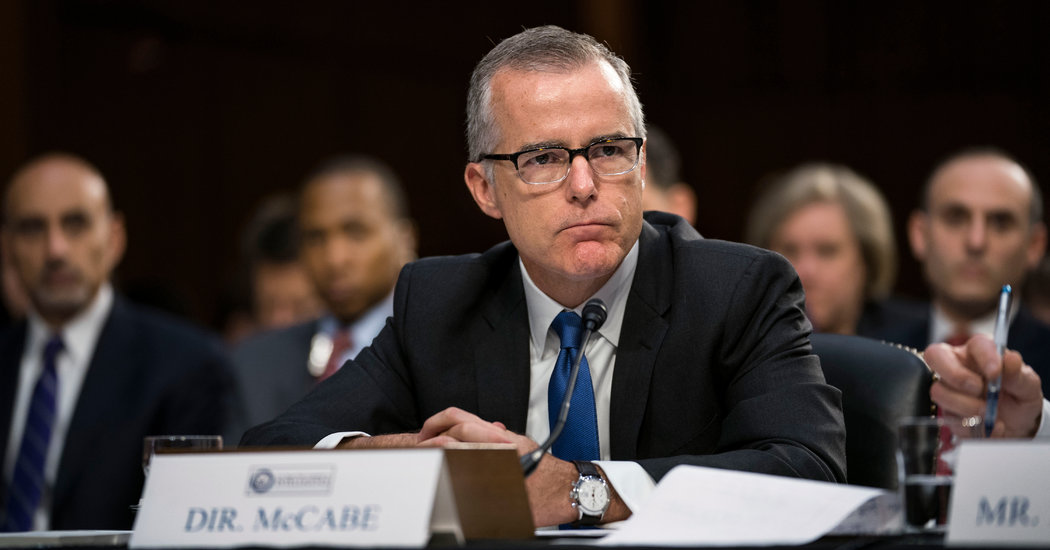 WASHINGTON — Andrew G. McCabe, the former deputy F.B.I. director and a frequent target of President Trump’s, will not face charges in an investigation into whether he lied to investigators about a media leak, his defense team said on Friday.

The decision by prosecutors in Washington ends a case that had left Mr. McCabe in legal limbo for nearly two years. It also appears to be a sign that Attorney General William P. Barr wants to show that the Justice Department is independent from the president: The notification came a day after Mr. Barr publicly challenged Mr. Trump to stop attacking law enforcement officials on Twitter and said the criticisms were making his job more difficult.

The prosecutors informed Mr. McCabe’s lawyers of their decision by phone on Friday morning, the lawyers, Michael R. Bromwich and David Schertler, said in a statement.

“We said at the outset of the criminal investigation, almost two years ago, that if the facts and the law determined the result, no charges would be brought,” they said. “We are pleased that Andrew McCabe and his family can go on with their lives without this cloud hanging over them.”

The president’s relentless criticism of the Justice Department probably complicated the prosecution of Mr. McCabe. His supporters viewed the investigation as politically motivated and inextricably tainted by Mr. Trump’s relentless attacks.

The lack of charges is likely to anger the president, who has long believed he was targeted illegally by Mr. McCabe and other former senior F.B.I. officials who opened the investigation in 2016 into whether his campaign conspired with Russia’s election interference operation.

Mr. Trump has most recently attacked the Justice Department and prosecutors for asking for a stiff prison sentence against Roger J. Stone Jr., the president’s longtime friend and former adviser.

The investigation into Mr. McCabe grew out of findings from the Justice Department inspector general, Michael E. Horowitz. He faulted Mr. McCabe in 2018 for misleading investigators when asked about the disclosure of information in 2016 to a Wall Street Journal reporter about an investigation into the Clinton Foundation.

Mr. Horowitz referred his findings to prosecutors in Washington, who investigated Mr. McCabe, presenting evidence to a grand jury.

Mr. McCabe’s lawyers have vigorously denied that he intentionally lied to Mr. Horowitz’s investigators. In a bid to convince law enforcement officials that they had no case, Mr. McCabe’s lawyers met in August with the deputy attorney general, Jeffrey A. Rosen, and the former United States attorney for the District of Columbia, Jessie K. Liu, whose prosecutors handled the case.

In September, the grand jury was recalled after going months without meeting but left the courthouse without revealing any signs of an impending indictment. The next day, Justice Department officials told Mr. McCabe’s lawyers that they had rejected the last-ditch appeal to not charge him.

Hints of the case’s weakness had emerged. One prosecutor assigned to the case recently left, an unusual step so close to a potential indictment. Another departed for a private law firm and has expressed reservations about how the case was handled.

A key witness testified that Mr. McCabe had no motive to lie because he was authorized as the F.B.I.’s deputy director to speak to the news media, so he would not have had to hide any discussions with reporters. Another important witness testified he could not immediately remember how the leak unfolded. Both would have been crucial to any prosecution.

Additionally, people who are charged with lying to the F.B.I. are typically accused of committing the offense in the course of a criminal investigation, not an administrative inquiry. For example, Mr. Horowitz determined last year that a senior Justice Department official committed wrongdoing by viewing pornography on his work computers and then providing false statements to investigators, but prosecutors declined to bring charges.

Mr. McCabe’s lawyers made the case to Mr. Rosen that other former officials were not prosecuted after they were caught lying to the inspector general’s investigators.

Mr. McCabe has been a consistent foil for Mr. Trump, who repeatedly attacked Mr. McCabe’s wife, Jill, over her failed 2015 campaign for the Virginia Senate, which received hundreds of thousands of dollars in donations from a political committee run by a longtime ally of the Clintons.

Mr. Trump seized on her campaign as proof that Mr. McCabe wanted to take him down while protecting Hillary Clinton, whom the F.B.I. had investigated for her use of a private email server.

When the president dismissed James B. Comey as F.B.I. director in 2017, he said it was in part for his decision to allow Mr. McCabe to be involved in the Clinton investigation, according to excerpts from a draft letter from the president to Mr. Comey that were read to The New York Times.

“Few events have represented a more profound breach of public trust than your decision to allow the Clinton email investigation to be overseen by deputy F.B.I. director Andrew McCabe, whose wife Jill McCabe received approximately $700,000 in campaign donations steered to her by a top Clinton surrogate,” Mr. Trump wrote. “McCabe should not have been allowed to work on this matter.”

But little evidence bears out the president’s view of Mr. McCabe. He oversaw the Clinton investigation as the bureau’s deputy director only after Mrs. McCabe lost her race, and the Wall Street Journal article about Mrs. Clinton late in the presidential campaign was more damaging to her than helpful.

In the months after the inspector general report, the president pushed for the firing of Mr. McCabe. “F.B.I. Deputy Director Andrew McCabe is racing the clock to retire with full benefits,” Mr. Trump tweeted in December 2017. “90 days to go?!!!”

Jeff Sessions, the attorney general at the time, dismissed Mr. McCabe hours before he was eligible for those benefits, a move many saw as vindictive. It was also a possible conflict of interest because Mr. McCabe had opened an investigation into Mr. Sessions after receiving a criminal referral from Congress suggesting that he had lied to lawmakers about his contacts with a Russian diplomat. The case was later closed.

Mr. McCabe spent 21 years in the F.B.I., beginning his career in New York investigating Russian organized crime. When terrorists struck the twin towers in the Sept. 11, 2001, attacks, Mr. McCabe deployed as a bureau SWAT team member. He later oversaw major international terrorism investigations and rose to run the bureau’s national security division and its Washington field office. He was promoted to deputy director in January 2016 after the Clinton email investigation was underway.

After Mr. Comey was fired, Mr. McCabe took over the F.B.I. as acting director during a period of intense turmoil at the top of the bureau. The F.B.I. began investigating whether Mr. Comey’s firing constituted obstruction of justice and opened a counterintelligence inquiry to determine whether Mr. Trump was being directed by Russia.

The special counsel, Robert S. Mueller III, took over the investigation, concluding that he had insufficient evidence to charge Mr. Trump or any of his associates with secretly conspiring with the Russians. Mr. Mueller also declined to say whether Mr. Trump obstructed justice, citing Justice Department policy against indicting sitting presidents, but laid out evidence of attempts by the president to impede the inquiry.

Rancor between the president and Mr. McCabe only grew after the publication of his book, “The Threat,” in which he accused Mr. Trump of terrorizing his family and punishing him for the Russia investigation.

“He went after me because the F.B.I. opened the Russia case, which led to the appointment of the special counsel,” Mr. McCabe wrote. Mr. Mueller’s investigation raised “questions about the legitimacy of his presence in the White House — questions that prompt fear” in Mr. Trump.