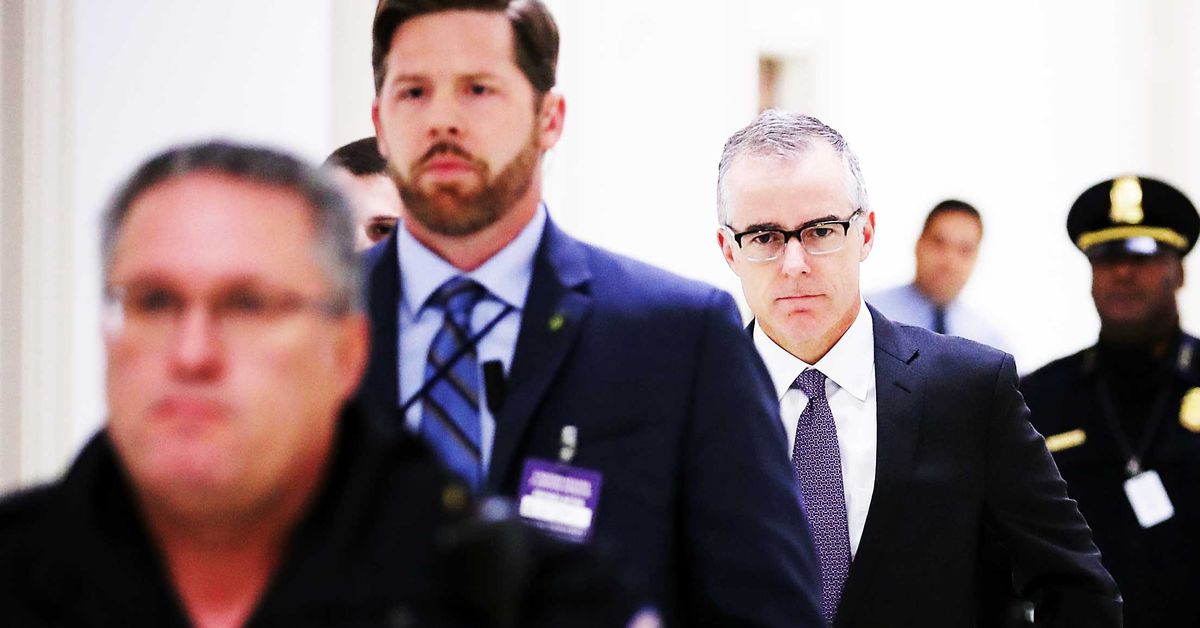 For anyone concerned that President Donald Trump and Attorney General Bill Barr are politicizing the criminal justice system, Friday afternoon has been a real roller coaster.

First, news broke that Justice Department prosecutors had closed one politically controversial case, a lengthy criminal investigation into former Deputy FBI Director Andrew McCabe, without bringing any charges. McCabe had been under scrutiny for potentially lying to internal investigators about his role in leaks concerning an FBI investigation into the Clinton Foundation — though many wondered whether the investigation was truly about pursuing someone President Trump had deemed an enemy.

Then, just around an hour later, the New York Times reported that Barr had appointed an outside prosecutor to review the criminal case against Michael Flynn. Flynn pleaded guilty to lying to the FBI about his contacts with the Russian ambassador back in 2017 but has not yet been sentenced and recently sought to withdraw his guilty plea.

Together, this is certainly an interesting pair of headlines coming the week after Barr both intervened to help water down a sentencing recommendation for Roger Stone and urged President Trump to stop tweeting about pending Justice Department criminal cases.

The McCabe news would seem a setback to Trump’s efforts to weaponize the Justice Department against his enemies. But the Flynn news is another addition to the now-lengthy list of instances where DOJ leaders have intervened in procedurally unusual ways to help out Trump’s friends.

The president will surely be very happy about the second piece of news — and not the first.

The Justice Department seemed prepared to indict McCabe. Then something happened.

To understand the Trump-McCabe saga, you have to understand that Trump has long despised and criticized McCabe for reasons having little to do with what McCabe was under investigation for.

Indeed, since as far back as October 2016 when he was a presidential candidate, Trump has been baselessly arguing that McCabe corruptly used his FBI position to help Hillary Clinton. (Trump’s gripe was that McCabe’s wife Jill had run for state Senate in Virginia in 2015, and that Clinton ally Terry McAuliffe had helped her fundraise.) Trump’s distrust of McCabe intensified after he became president and fired FBI Director James Comey. The Russia investigation was heating up, and Trump insisted McCabe was a Comey ally who was out to get him.

Separately from all that, McCabe became ensnared in a leak investigation. The Justice Department had sought to find the source behind an October 2016 Wall Street Journal story about internal deliberations over an investigation into the Clinton Foundation. McCabe had in fact authorized these leaks (in an apparent attempt to defend his reputation), and the Justice Department’s inspector general, Michael Horowitz, concluded he lacked candor when asked about them by investigators. (It should be noted that this disclosure was not an attempt to hurt Trump’s campaign — if anything, it hurt Clinton’s.)

McCabe was then hastily fired in March 2018 — hours before he became fully eligible for his pension, to Trump’s glee. The Justice Department said McCabe was being ousted due to the inspector general’s findings, but he has argued (including in a lawsuit) that this was political payback.

Since then, McCabe has become a vocal critic of Trump in the media. Meanwhile, Horowitz had made a criminal referral of his conduct, and the US Attorney’s Office for the District of Columbia started looking into whether to charge him for lying to investigators about the leak.

Yet critics argued that the case against McCabe appeared weak and looked a whole lot like political retribution — especially because President Trump continued to regularly berate McCabe in tweets and public comments, even after his firing. It raised questions about whether the Justice Department was being pressured to go after Trump’s enemies for political reasons.

Last September, reports claimed that the Justice Department was preparing to go ahead and charge McCabe anyway. Yet no indictment materialized. Rumors flew that a grand jury may have rejected prosecutors’ effort (which would have been quite a rare occurrence), but this has never been confirmed.

McCabe has been in limbo since then. But this Friday, his defense attorneys, Michael Bromwich and David Schertler, announced in a statement that prosecutors had told them they had closed the case. “At long last, justice has been done in this matter,” they wrote.

So this is at least somewhat encouraging news for those who feared that Trump and Barr have been pushing the Justice Department toward politicized prosecutions — if something like that was going on here, it ended up failing in the end.

Michael Flynn has argued he got a raw deal. Barr has appointed prosecutors to look into it.

Yet the other news is that Barr’s Justice Department is reviewing a case brought against one of Trump’s allies: former National Security Adviser Michael Flynn.

In December 2017, Flynn struck a plea deal with special counsel Robert Mueller’s team — pleading guilty to lying to the FBI about his contacts with the Russian ambassador, and agreeing to cooperate. Everything seemed to be going according to plan with this, and prosecutors recommended Flynn get no prison time as his sentencing approached in December 2018.

Surprisingly, though, at that hearing, the judge in Flynn’s case, Emmet Sullivan, raked Flynn over the coals, saying he felt “disgust” and “disdain” for what Flynn did and strongly suggesting he might give Flynn some prison time. However, Sullivan offered Flynn the opportunity to delay his sentencing to get credit for further cooperation with the government, and Flynn jumped at the chance.

Yet instead of cooperating further, Flynn decided to dump his lawyers and hire a conservative firebrand, Sidney Powell. He also did not agree to give prosecutors the testimony they wanted in a case against one of his business associates, Bijan Rafiekian. Filings from Powell grew increasingly defiant, seeming to reject Flynn’s previous acceptance of responsibility for his false statements and imply that Flynn had been set up by the government. Finally, Powell filed a motion to have Flynn’s guilty plea withdrawn.

Now comes the news, via the Times’s Charlie Savage, Adam Goldman, and Matt Apuzzo, that Barr has appointed “an outside prosecutor to scrutinize the criminal case” against Flynn. That prosecutor is Jeff Jensen, who works in the office of the US Attorney in St. Louis.

“The review is highly unusual and could trigger more accusations of political interference by top Justice Department officials into the work of career prosecutors,” the Times reporters write.

It’s unclear what Jensen will find — his review could be fair, or it could be political hackwork. But even before knowing that, this seems to be just the latest example among many that friends of the president get special treatment departing from ordinary procedures in Barr’s Justice Department.

Already, in January, senior Justice Department officials had intervened to change a new sentencing recommendation from Flynn’s prosecutors. This came weeks before a similar drama played out involving the sentencing recommendation for Roger Stone. Barr also recently installed a close ally in the US Attorney’s office for the District of Columbia, which is handling both cases.

So while Barr may be urging Trump to stop tweeting about Justice Department criminal cases, the attorney general appears to be happily continuing his activity behind the scenes on cases of importance to the president.