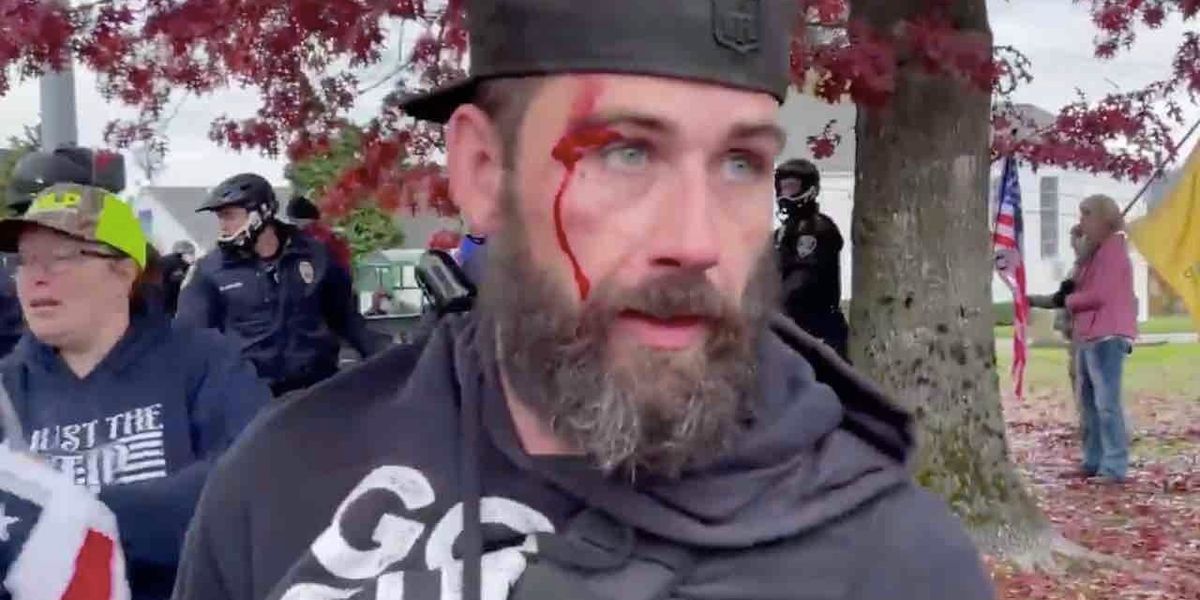 It was a sometimes violent study in contrasts Saturday when a large group of supporters of President Donald Trump faced off with Antifa militants in Olympia, Washington, after numerous media outlets declared former Vice President Joe Biden the 2020 election victor.

As chronicled on video by reporter Katie Daviscourt, Trump backers lined streets and even gathered on the steps of the state capitol to wave American and pro-Trump flags and chant “back the blue!” — a pro-police rallying cry:

Crowd is chanting Back the Blue to show support for Law Enforcement. https://t.co/52VNLqOy1r

The pro-Trump crowd told them off with chants of “get a job!” and “f*** Antifa!” (Content warning: Language):

Crowd of Trump Supporters chant “fu*k Antifa” at the small group of militants across the street. https://t.co/zB2i4FC8fM

Soon the verbal war of words turned violent, as a brawl ensued between the groups and police responded with a flash-bang and what appeared to be rounds of non-lethal munitions.

One witness mentioned that Antifa militants were “attacking two women,” and then a man bleeding from his eyebrow — presumably a Trump supporter — confirmed that Antifa attacked him as well:

In another clip, two pro-Trump women described the Antifa attack. One said she was punched from behind as a leftist militant tried to steal her pro-Trump flag, and the second woman said a gang of Antifa thugs jumped her.

But soon a distinct sound was heard in the background.

It was singing. A bit off-key, a tad haggard — but singing nonetheless. It was the national anthem.

That’s right. The pro-Trump crowd answered the cowardice and destruction that have become Antifa’s trademark with a statement of hard-won freedom and liberty — even for the likes of those who’d rather stomp all over it.

Should Biden take office in January, he may have to contend with more than he may have bargained for. Also on Saturday, anarchists busted windows at the Multnomah County Democrats building in Portland and spray-painted messages such as “F*** Biden” and “No Presidents” — along with the universal symbol of anarchists.

In Detroit, one leftist group wasn’t too thrilled with Biden, either, and chanted, “F*** Donald Trump! F*** Biden too! Both of them don’t give a f*** about you!”