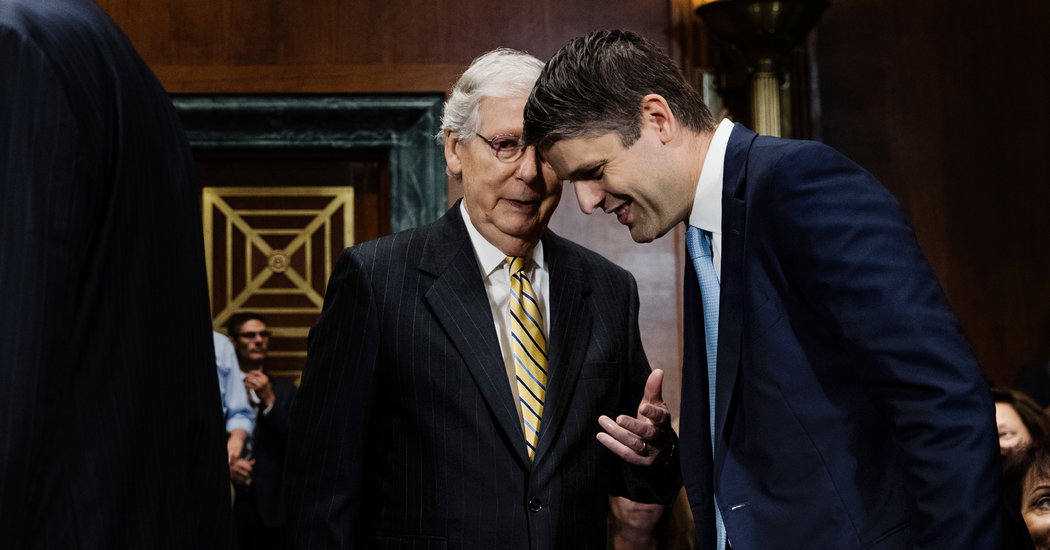 Just days before a high-profile Senate confirmation hearing to fill a vacancy on the prestigious U.S. Court of Appeals for the District of Columbia Circuit, the court’s chief judge has opened the door to an inquiry into whether ethical improprieties occurred in the creation of the coveted opening.

In an order dated May 1, Judge Sri Srinivasan asked Chief Justice John G. Roberts Jr. to assign another circuit to look into a complaint filed by the progressive advocacy group Demand Justice, which questioned the timing and circumstances of Judge Thomas B. Griffith’s retirement announcement in early March.

The advocacy group acted in March after disclosures that Senator Mitch McConnell of Kentucky, the majority leader who has focused intently on conservative judicial confirmations the past three years, had been contacting appeals court judges nominated by Republican presidents to encourage them to retire. In the case of Judge Griffith, his retirement opened the way for President Trump to nominate Justin Walker, a 37-year-old protégé of Mr. McConnell’s whom the senator had ardently promoted for the seat.

With the number of federal judicial vacancies to fill nearly exhausted, Mr. McConnell has been urging those contemplating retirement to step aside this year if they want to assure that their successors will be nominated by a Republican president and confirmed by a Republican-controlled Senate.

It is not known whether Mr. McConnell had been in touch with Judge Griffith, a former Senate legal counsel who was nominated to the appeals court in 2004 by President George W. Bush, and on Monday a top aide to the majority leader refused to say.

Judge Walker of Louisville, who was named last month, is to face Senate questioners at a confirmation hearing set for Wednesday that was already expected to be contentious. The new court order is likely to become another point of conflict between Republicans backing Judge Walker and Democrats who have criticized his ideology as well as the decision by Senate Republicans to push ahead with the hearing despite the pandemic.

In his order, Judge Srinivasan, who was placed on the appeals court by President Barack Obama, said he decided to request “review and disposition” of the complaint by a judicial council in another circuit to avoid any question of bias about the outcome.

“The organization’s request for an inquiry concerns the decision of a judge of this court to retire from service and the resulting creation of a vacancy on this court, which would be filled by a future colleague on this court,” the judge wrote. He said the circumstances made it obvious that it should be reviewed outside the D.C. circuit court.

Judge Srinivasan said he made his ruling without “any inquiry by this court into the statements contained in the unverified correspondence or the questions posited by the organization in the correspondence about the possibility of judicial misconduct.” He said he decided to make his order public to show that the accusations were not being ignored since the questions raised by the group “about the possibility of judicial misconduct have been reported in various major news outlets.”

The court order does not specifically identify the Griffith retirement as the subject, but it does refer to a March 19 complaint lodged by Demand Justice.

The organization, formed to raise liberal consciousness about the importance of judicial nominations, appealed to Judge Srinivasan after The New York Times published an article on the judicial efforts by Mr. McConnell.

“The coordinated manner of Majority Leader McConnell’s involvement in the judges’ decision-making is quite unprecedented and raises significant ethical questions for the judges who heed his advice,” the group said in its letter requesting an investigation. It said a “thorough inquiry into the judge’s announcement and scheduled retirement, including when and how the decision to retire was made, and with whose input, is crucial.”

Nominations to the D.C. court of appeals have become a fierce partisan battleground, because the court is often called to weigh in on Washington’s policy and separation of powers fights and because judges serving there are considered likely contenders for the Supreme Court. Placing nominees on the court is considered so important by both parties that Democrats changed Senate rules in 2013 to prevent Republicans from blocking nominees to the court by Mr. Obama.

A spokesman for Mr. McConnell dismissed the complaint.

“Leader McConnell looks forward to watching Judge Walker’s confirmation hearing this week,” said David Popp. He would not address whether the majority leader and Judge Griffith had discussed retirement plans.

Any judicial review would have no jurisdiction over Mr. McConnell and would instead have to focus on Judge Griffith and his decision to retire. The judge could not be reached for comment on Monday.

One Democrat on the Senate Judiciary Committee, which will conduct the Walker hearing on Wednesday, said he was glad ethical questions about the retirement were not being dismissed out of hand.

“The judiciary is right to take seriously allegations that sitting judges are gaming their retirements at the request of politicians,” said Senator Sheldon Whitehouse, Democrat of Rhode Island. “Mitch McConnell has been clear that his top priority is packing the courts with the judges his right-wing donors want, and that he’s actively pushing judges to retire. A judge would undermine the credibility of the bench by participating in that partisan gamesmanship.”

On Monday night, Brian Fallon, the executive director of Demand Justice, went further, calling for a delay of the hearing “until we know the truth about what ethical lines Mitch McConnell crossed to get Walker this seat.”

“At the very least,” Mr. Fallon said in a statement, “McConnell should come clean about whether and when he contacted Judge Thomas Griffith prior to his sudden retirement.”

Mr. McConnell has known Judge Walker since the nominee was in high school and has been a zealous advocate for him, including taking him to the Oval Office to meet Mr. Trump. Judge Walker, who has served only six months as a U.S. District Court judge in Kentucky, was previously rated unqualified by the American Bar Association because of his limited experience, but he has strong Republican support.