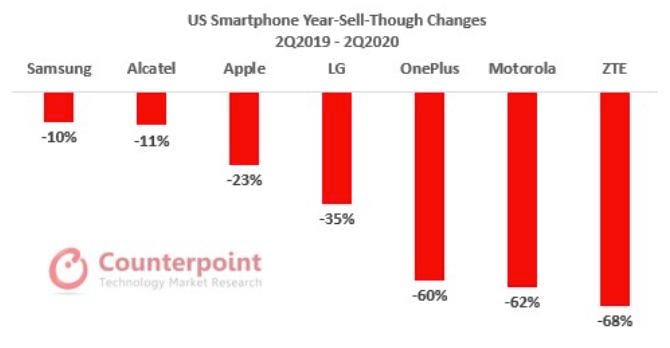 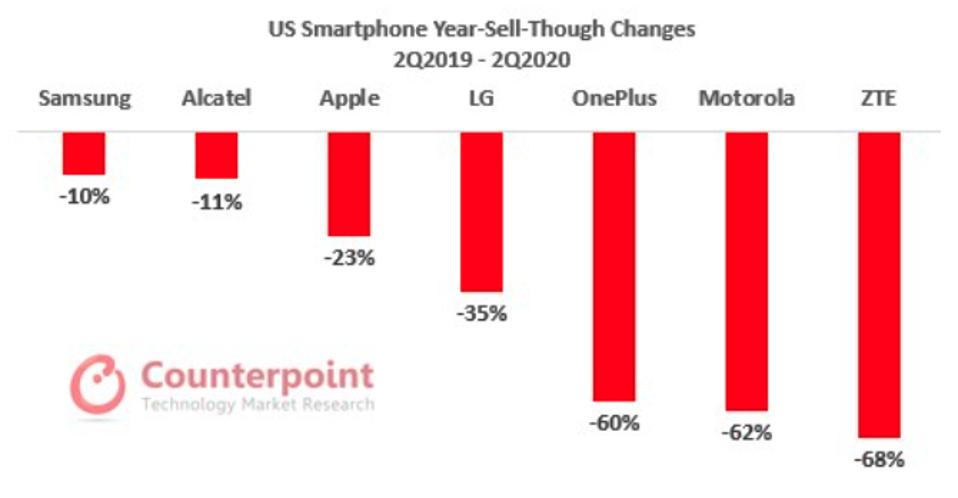 Overall smartphone sales dropped 25% year over year in the U.S. according to a new report from Counterpoint Research. The worst-hit brands were Motorola and ZTE, but even Apple was down 23% compared to 2019.

“US smartphone sales picked up when the first stimulus checks were received by consumers during the back half of April,” Counterpoint’s Jeff Fieldhack said in a statement. “Soon after, carrier stores and national retail began opening again which further helped the recovery.”

Predictably, March and April were weak as lockdowns took effect. Volume in April was down 50% from last year.

But, reflecting significant pent-up demand, smartphone sales in June were higher than June 2019, showing, Counterpoint says, that the US smartphone market is resilient.

While every single smartphone manufacturer’s sales were down, online sales doubled. COVID-19 impacted sales channels by boosting e-commerce transactions from 14% of phones sold in 2019 to 31% of phones sold in Q2 2020. That benefited Apple and Samsung more than others, Counterpoint says.

Alcatel is a French mobile brand owned by Nokia and licensed by China’s TCL.

While Samsung did well compared to other companies, COVID shutdowns did disrupt the company’s Galaxy S20 launch. It was timed just as most stores shut down, resulting in almost 40% fewer activations than last year’s S10, Counterpoint says.

Apple was down significantly at 23%, but its budget brand phone, the iPhone SE, did well.

“It was not a typical Apple launch with large fanfare and a launch event at the Steve Jobs theatre, which normally also includes a blitz of TV ads,” Fieldhack says. “However, the device has been successful and selling above expectations in both postpaid and prepaid channels.”

Most buyers are either previous Android users or owners of older Apple phones.