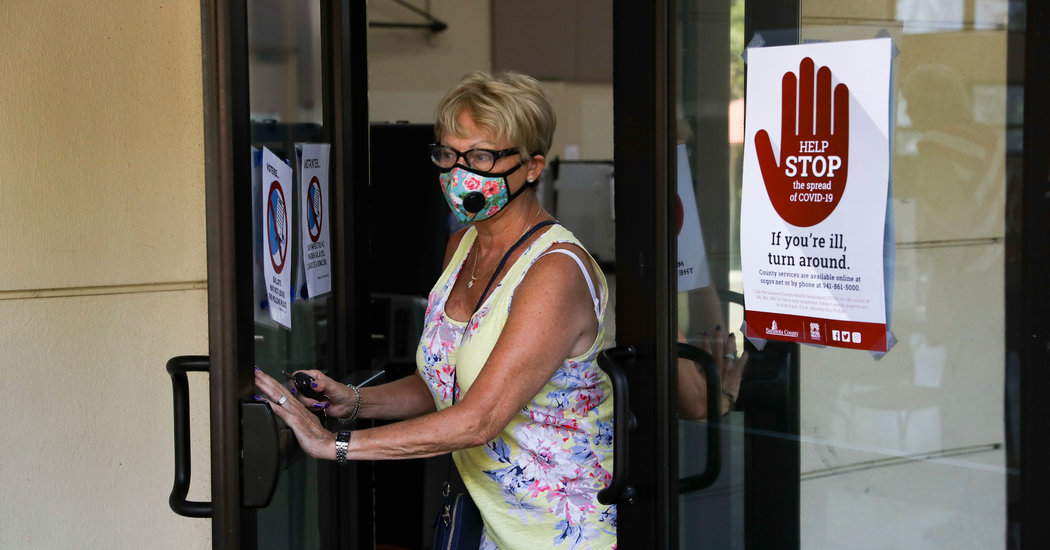 These are the instructions now, simple and bleak: Stay home if you can. Only essential personnel report for duty. Do not travel unless absolutely necessary.

And here, on Tuesday, were the attendant questions, at least as grim:

Are voters essential personnel in a pandemic?

Is an election — that grand replenishing of government, where the supply shelves can feel bare — absolutely necessary under these conditions?

Can staying home really be the civic duty this time? And what good is politics if that’s true?

There are no clean answers and, this week, no particularly consistent ones. The collision of social distancing and the social fabric seemed to threaten the aims of both, producing a Primary Day at once disjointed and borderline dystopian.

Three states — Florida, Illinois and Arizona — pushed ahead with their elections amid public health guidelines to avoid large crowds, and the virus, if nothing else, often yielded an in-person electoral thinning that allowed many participants to conform. They marked their choices at times in the eerie quiet of polling places that smelled of disinfectant wipes or, more troubling, nothing at all. (Poll workers in Chicago complained about a dearth of proper cleaning supplies.)

The hasty shuffling of polling locations, to protect the vulnerable at senior centers and other sites, produced reports of voters being turned away in the initial chaos. Volunteers dropped out at the last minute. Some venues saw long lines born not of high turnout, exactly, but distancing measures intended to keep people from clustering in large numbers inside.

The plain math on Tuesday will show that former Vice President Joseph R. Biden Jr. swept each state, adding to a significant delegate lead against Senator Bernie Sanders. But for all the stakes of this Democratic primary — the pandemic has reinforced nothing if not the inescapable fact that the presidency matters — it was hard to dwell much on the county-by-county returns.

In separate appearances over live-stream on Tuesday, both candidates focused far more on the virus than the vote. “I know we as a people are up to this challenge,” Mr. Biden said, allowing himself an aside to note his campaign’s “very good night.” “We always have been.”

Mr. Sanders, outlining progressive policy proposals to counter the crisis, did not discuss the results.

Before Tuesday evening, some states had determined that they could not abide democracy in this form at all. In Ohio, where a primary had been scheduled for Tuesday, Gov. Mike DeWine, a Republican, put off the election with a series of legal actions and declarations on the eve of the vote.

“This is a gathering of people,” Mr. DeWine told “The View” (remotely) on Tuesday. “And what we’ve tried to do is explain to Ohioans we cannot have large gatherings.”

Other states, like Georgia, Louisiana, Kentucky and Maryland, have likewise postponed or moved to postpone their elections. And in one of the headiest turns in a primary full of them — from the debacle of the Iowa caucuses to the pandemic that makes that fiasco feel quaint — presidential campaigns hard-wired to drive support to their cause have found themselves making a more nuanced case of late: Vote for me. If you feel comfortable.

“Going to the polls amid the coronavirus outbreak is a personal decision,” Mr. Sanders tweeted on Tuesday, as his campaign said it was forgoing traditional get-out-the-vote efforts, “and we respect whichever choice voters make.”

The message lands uneasily in a country that has generally been told, by Mr. Sanders as forcefully as anyone, that voting is a cure for what ails it.

Vote out the scoundrels. Vote in the change. Vote as if your life depends on it.

It is a call as familiar as it is bipartisan.

“Whether you love me or hate me,” President Trump instructed last summer, tying his success to the economy’s, “you have to vote for me.”

Yet such is the cruelty and precariousness of the present bind, when public safety and ballot-casting can appear to be in conflict. Telling residents to stay home, in an age of voter purges and fierce debates over voting rights, is bound to be fraught under any circumstances.

“It’s like watching these two colliding trains,” said Carol Anderson, a professor of African-American studies at Emory University, who has written extensively about voter suppression. “How do we maintain the public’s health and also democracy’s health?”

She suggested the two were not mutually exclusive, floating options like no-excuse absentee voting and expansions of early voting. Tom Perez, the Democratic National Committee chairman, seemed to have similar remedies in mind on Tuesday, calling on the remaining primary states to embrace such approaches and vote-by-mail as often as possible.

Arizona, where most Democrats had filled out ballots early ahead of this week’s primary, would appear to be a relevant data point. Despite the virus, the state was reporting no major issues on Tuesday.

Among the early voters was Marlene Brown, 66, a retired insurance executive who voted in Surprise, Ariz., on Saturday. She said she was not concerned for her safety, even as she worried some about others who might leave their homes.

But Ms. Brown had never missed an election, she said. This was not the moment to endanger the streak.

“I was not going to start now,” she reasoned, “when we really need to do something.”