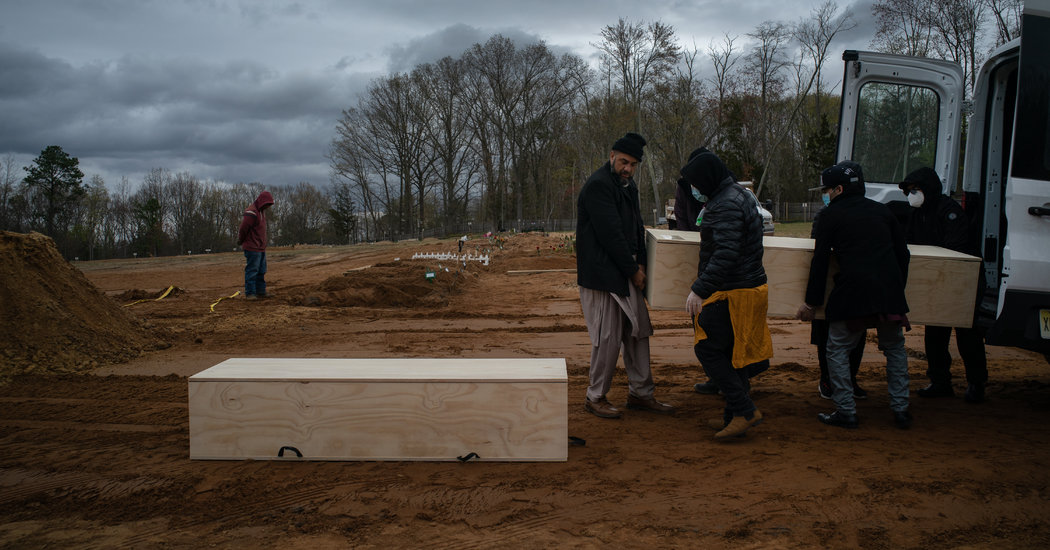 WASHINGTON — As President Trump presses states to reopen their economies, his administration is privately projecting a steady rise in coronavirus infections and deaths over the next several weeks, reaching about 3,000 daily deaths on June 1 — nearly double the current level.

The projections, based on data collected by various agencies, including the Centers for Disease Control and Prevention, and laid out in an internal document obtained Monday by The New York Times, forecast about 200,000 new cases each day by the end of May, up from about 30,000 cases now. There are currently about 1,750 deaths per day, the data shows.

They are not the only ones forecasting more carnage. Another model, closely watched by the White House, raised its fatality projections on Monday to more than 134,000 American deaths from Covid-19, the disease caused by the coronavirus, by early August. The Institute for Health Metrics and Evaluation at the University of Washington more than doubled its previous projection of about 60,000 total deaths, an increase that it said partly reflects “changes in mobility and social distancing policies.”

The numbers underscore a sobering reality: While the United States has been hunkered down for the past seven weeks, the prognosis has not markedly improved. As states reopen — many without meeting White House guidelines that call for a steady decline in coronavirus cases or in the number of people testing positive over a 14-day period — the cost of the shift is likely to be tallied in funerals.

“There remains a large number of counties whose burden continues to grow,” the C.D.C. warned, alongside a map that offered a detailed view of the growth of the pandemic.

The projections amplify the primary fear of public health experts: that a reopening of the economy will put the nation right back where it was in mid-March, when cases were rising so rapidly in some parts of the country that patients were dying on gurneys in hospital hallways amid overloaded health systems.

Under the White House’s reopening plan, called “Opening Up America Again,” states considering relaxing stay-at-home policies are supposed to show a “downward trajectory” either in the number of new infections or positive tests as a percent of total tests over 14 days, and a “robust testing program” for at-risk health care workers.

But some of the states moving the quickest are not honoring all of those guidelines.

In fact, the Trump administration has steered clear of enacting a national policy to prevent its own projections from coming to pass. On a conference call with the nation’s governors on Monday, Vice President Mike Pence cheered on state-level coronavirus testing, and he again promised this week to ship out more tests to all 50 states.

But a recording of the call, obtained by The Times, made clear that the White House was taking its cues from state governments. Mr. Pence’s upbeat assessment also included some public relations advice for the governors.

“It’s important that as we see progress being made, and declining hospitalizations and emergency room admissions and positive rates going down, that all of these governors are also aware as they’re increasing testing, the number of cases that are going to be reported are going up,” the vice president said on the call. “But it’s all going to be a matter of making sure that the public sees the whole picture. But it’s all progress.”

While the Trump White House is emphasizing testing, experts say a whole range of additional policies are needed to contain the fast-moving virus: isolation of those infected, contact tracing to locate people who interacted with a coronavirus-positive person and quarantines for those people.

In New York, where the number of overall cases is declining, a cautious-sounding Gov. Andrew M. Cuomo said Monday that the state would monitor four “core factors” to determine if a region is ready to reopen: the number of new infections; the capacity of the health care system; the testing capacity; and the capacity for “contact tracing” to identify people exposed to those who test positive.

“While we continue to reduce the spread of the Covid-19 virus, we can begin to focus on reopening, but we have to be careful and use the information we’ve learned so we don’t erase the strides we’ve already made,” Mr. Cuomo said. “Reopening is not going to happen statewide all at once.”

Nationally, 27 states had loosened social distancing restrictions in some way as of Monday, and others had announced changes that will take effect in the coming weeks, according to an analysis by the Kaiser Family Foundation. But only 20 of those states meet the caseload or testing criteria set out by the Trump administration.

The remaining seven — Indiana, Iowa, Kansas, Minnesota, Mississippi, Nebraska and Wyoming — are still showing a rise in daily infections and positive tests, but have moved toward reopening anyway.

The administration’s forecast, she said, “says we are far from out of the woods on this, and it’s quite concerning.”

Before reopening, Ms. Kates said, governors must consider other factors beyond caseload and testing: “Do we have enough I.C.U. beds? How is our hospital capacity? How is our contact tracing?” Based on its own metrics, which urge states to increase the number of tests conducted and the share of their populations tested each week, her analysis concluded that just nine of the 27 states could consider relaxing social distancing requirements.

If anything, the administration’s projections are too optimistic, forecasting experts said Monday. In the projections, the number of actual deaths for one of the last days in April turned out to be slightly lower than what the model showed. But for much of April and parts of May, actual deaths were some 10 times higher than the model predicted.

“The model is overly optimistic and not particularly useful in guiding decisions about the disease’s trajectory,” said Dr. Donald Burke, a professor of epidemiology at the University of Pittsburgh Graduate School of Public Health.

Dr. George Rutherford, a professor of epidemiology at the University of California, San Francisco, noted that the government’s model has already come in below reported deaths from Covid-19, and that death toll is not counting deaths not officially recorded. “Remember,” he said, “these are reported deaths; the true number is likely higher.”

In the absence of a national policy to slow the virus, state officials have been left to answer a wrenching question: How many deaths are acceptable?

The White House distanced itself from the projections, saying the document, dated May 2, was not produced by or presented to the president’s coronavirus task force, which does its own modeling. “The data is not reflective of any of the modeling done by the task force or data that the task force has analyzed,” Judd Deere, Mr. Trump’s deputy press secretary, told reporters on Monday.

On Sunday, the president offered his own projections, saying that deaths in the United States could reach 100,000, twice as many as he had forecast only two weeks ago. But that figure falls short of what his own administration is now predicting to be the total death toll by the end of May — much less in the months that follow. It follows a pattern for Mr. Trump, who has frequently understated the effect of the disease.

Public health experts and epidemiologists say they were not surprised by the administration’s numbers. Many do not expect the virus to slow down until 60 to 70 percent of the population is infected, creating what experts call “herd immunity.”

Dr. Michael T. Osterholm, the director of the Center for Infectious Disease Research and Policy at the University of Minnesota, published an analysis last week describing three possible pandemic wave scenarios through the end of 2021: a series of repetitive smaller waves that gradually diminish over time; a sharp rise in cases in the fall and one or more subsequent smaller waves; and a “slow burn” of continuing transmission, without a clear wave pattern.

“I’m not saying we don’t have to deal with our economy and lost jobs in society,” Dr. Osterholm said in an interview on Monday. “We can’t spend 18 to 24 months in lockdown, but at the same time, this virus is going to keep transmitting, and we have to not let our hospitals get overrun.”

Yet many states are still operating under stay-at-home orders. Public health officials said their goal was to “bend the curve” — to slow and ultimately reverse the rising trajectory of infections — by shutting down schools and businesses. But after nearly two months of a near total shutdown, the curve does not appear to have bent as far as they had hoped.

“While mitigation didn’t fail, I think it’s fair to say that it didn’t work as well as we expected,” Scott Gottlieb, Mr. Trump’s former commissioner of food and drugs, said Sunday on the CBS program “Face the Nation.” “We expected that we would start seeing more significant declines in new cases and deaths around the nation at this point. And we’re just not seeing that.”