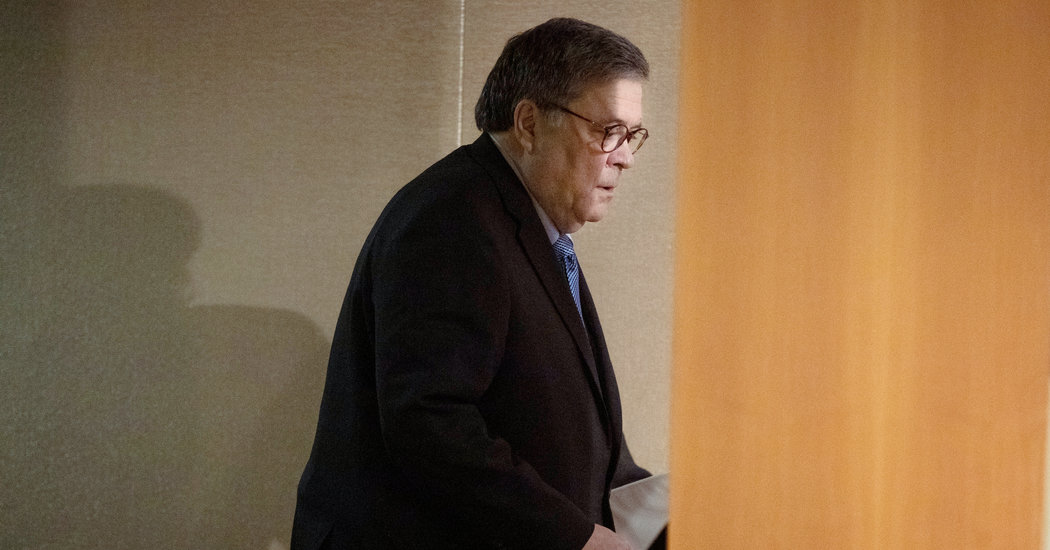 WASHINGTON — Scholars have roundly rejected a central argument of President Trump’s lawyers that abuse of power is not by itself an impeachable offense. But it turns out that another important legal figure has contradicted that idea: Mr. Trump’s attorney general and close ally, William P. Barr.

In summer 2018, when he was still in private practice, Mr. Barr wrote a confidential memo for the Justice Department and Mr. Trump’s legal team to help the president get out of a problem. The special counsel, Robert S. Mueller III, was pressuring him to answer questions about whether he had illegally impeded the Russia investigation.

Mr. Trump should not talk to investigators about his actions as president, even under a subpoena, Mr. Barr wrote in his 19-page memo, which became public during his confirmation. Mr. Barr based his advice on a sweeping theory of executive power under which obstruction of justice laws do not apply to presidents, even if they misuse their authority over the Justice Department to block investigations into themselves or their associates for corrupt reasons.

But Mr. Barr tempered his theory with a reassurance. Even without the possibility of criminal penalties, he wrote, a check is in place on presidents who abuse their discretionary powers — impeachment.

He added, “The remedy of impeachment demonstrates that the president remains accountable under law for his misdeeds in office,” quoting from a 1982 Supreme Court case.

Mr. Barr has long embraced a maximalist philosophy of executive power. But in espousing the view that abuse of power can be an impeachable offense, he put himself squarely in the mainstream of legal thinking. Most constitutional scholars broadly agree that the constitutional term “high crimes and misdemeanors” for which an official may be impeached includes abuse of power.

But in a 110-page brief on Monday, Mr. Trump’s impeachment team — led by Pat A. Cipollone, the White House counsel and a former aide to Mr. Barr in the first Bush administration, and Mr. Trump’s personal lawyer Jay Sekulow — portrayed the article of impeachment claiming that Mr. Trump abused his power in the Ukraine affair as unconstitutional because he was not accused of an ordinary crime.

“House Democrats’ novel conception of ‘abuse of power’ as a supposedly impeachable offense is constitutionally defective,” they wrote. “It supplants the framers’ standard of ‘high crimes and misdemeanors’ with a made-up theory that the president can be impeached and removed from office under an amorphous and undefined standard of ‘abuse of power.’”

Contrary to what Mr. Barr wrote 20 months ago, the Trump defense team also insisted that the framers did not want Congress to judge whether presidents abused their discretion and made decisions based on improper motives.

“House Democrats’ conception of ‘abuse of power’ is especially dangerous because it rests on the even more radical claim that a president can be impeached and removed from office solely for doing something he is allowed to do, if he did it for the ‘wrong’ subjective reasons,” the Trump team wrote.

A spokeswoman for Mr. Barr declined to comment. A spokesman for Mr. Trump’s impeachment defense team did not respond to a request for comment about the tensions.

But Mr. Barr’s view was no passing thought. His 2018 memo emphasized that presidents who misuse their authority by acting with an improper motive are politically accountable, not just in elections but also via impeachment.

Between elections, “the people’s representatives stand watch and have the tools to oversee, discipline, and, if they deem appropriate, remove the president from office,” he wrote. “Under the framers’ plan, the determination whether the president is making decisions based on ‘improper’ motives or whether he is ‘faithfully’ discharging his responsibilities is left to the people, through the election process, and the Congress, through the impeachment process.”

The result of Mr. Barr’s main argument in 2018 and the Trump team’s theory in 2020 is identical: Both posited that facts were immaterial, both in a way that was convenient to counter the threat Mr. Trump faced at that moment.

If Mr. Barr’s obstruction of justice theory is correct — and many legal scholars reject it — then Mr. Mueller had no basis to scrutinize Mr. Trump’s actions that interfered with the Russia investigation.

Similarly, if the Trump impeachment team’s theory is correct, the Senate has no basis to subpoena documents or call witnesses. The lawyers are implying that even if Mr. Trump did abuse his power to conduct foreign policy by trying to coerce Ukraine into announcing investigations that could help him in the 2020 election, the Senate should acquit Mr. Trump anyway.

Another member of Mr. Trump’s legal team, Alan Dershowitz, a professor emeritus at Harvard Law School and criminal defense lawyer, is expected to make a presentation to the Senate trial this week laying out in detail the theory that abuses of power are not impeachable without an ordinary criminal violation.

Critics of Mr. Dershowitz’s arguments have pointed to the seeming tension with comments he made in 1998, when he did not have a client facing impeachment for abuse of power: “If you have somebody who completely corrupts the office of president and who abuses trust and who poses great danger to our liberty, you don’t need a technical crime.”

In an interview this week, Mr. Dershowitz argued that his position now was not inconsistent with what he said in 1998, pointing to his use then of the phrase “technical crime” and saying that he is arguing today that impeachment requires “crimelike” conduct.

Mr. Dershowitz went further on Tuesday, saying on Twitter that he had not thoroughly researched the question in 1998 but recently has done so. “To the extent therefore that my 1998 off-the-cuff interview statement suggested the opposite,” he wrote, “I retract it.”