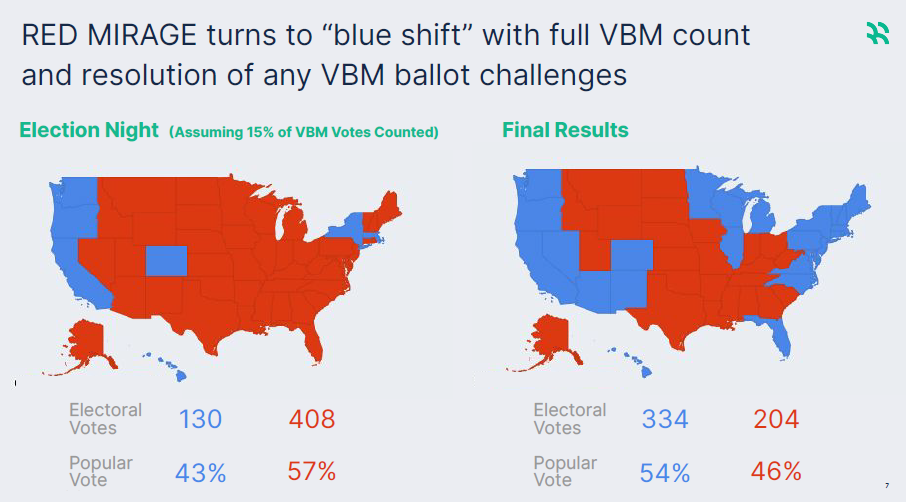 Yes, voters in each of the 50 states participate in the presidential election. But, like past elections, it will be key blocs in a dozen battleground states that are likely to decide who occupies the Oval Office in January.

If you want to know who’s headed for victory, these are the 12 states to watch, based on polls, ad spending and candidate visits. Ten of them went for Trump four years ago while the other two opted for Hillary Clinton.

Trump’s standing across all states surged on a booming economy a year ago but it has gone down as the coronavirus pandemic continues to ravage the U.S, especially in the swing states that will decide the presidency. And already, more than 93 million Americans have cast early ballots, smashing all previous voting pre-Election Day.

Here’s how those state shape up for Election Day:

Bill Clinton in 1996 is the only Democrat who has won Arizona (11 electoral votes) since 1952, but most political analysts say Biden has better than a decent shot in a state Trump won by 3.5 percentage points four years ago. The average of state polls has Biden up by 1 percentage point.

The former vice president’s chances have been boosted by Trump’s anti-immigration policies and rhetoric that have galvanized the state’s large Latino electorate and the endorsement of key GOP moderates in the state, including former Sen. Jeff Flake and Cindy McCain, the widow of revered Sen. John McCain.

Another important factor helping the former vice president is the Senate race where Democrat Mark Kelly is leading over GOP incumbent Martha McSally.

Obama’s 2008 win in North Carolina (15 electoral votes) in 2008 has been the only time a Democrat won the state since Jimmy Carter won in 1976. Trump won the state by 3.6% in 2016 but the average of state polls show the president ahead by less than one point.

The growing diversity and suburbanization of the state and a strong showing by Democrat Cal Cunningham in the Senate race are expected to help the former vice president in his race against Trump. A recent New York Times/Siena College poll found Biden rising among women, voters under 45 and African-Americans.

Trump is pinning his hopes on Pennsylvania(20 electoral votes), judging by the numerous rallies he’s held in the final weeks of the campaign. Most analysts say the presidency could well be decided by the Keystone State which Biden now leads by 4.3 points based on the average of state polls.

Along with Pennsylvania, Michigan and Wisconsin were reliably blue states in the Upper Midwest that pivoted to Trump in 2016.

A recent poll done by the EPIC-MRA for the Detroit Free Press indicates that Trump is not doing as well among a core constituency that catapulted him to victory in the Wolverine State. Four years ago, white voters without college degrees backed the president 62%-31%, according to exit polls in 2016, but the latest survey finds Trump up among those blue-collar workers by a smaller margin: 54%-39%.

The growth of the Latino population has started to make Nevada (six electoral votes) a reliably blue state, but it remains within striking distance for Trump, whose background as a casino owner gives him a natural connection to the Silver State. The average of state polls shows Biden leading by 3.6 points.

Clinton during the 2016 campaign never visited Wisconsin (10 electoral votes) and lost by fewer than 23,000 votes (out of nearly 3 million votes cast). Biden’s decision to make the Badger State a priority appears to be paying off as the average of state polls has the former vice president up by 6.6 points, a margin that Trump supporters point out is not far from where it was four years ago.

Though Trump has visited the state more frequently than Biden, the Democratic challenger is winning among those casting ballots before Election Day. As of late last week, 41% of respondents to the Marquette University Law School Poll say they had already voted. Of those, 64% say they voted for Biden, 25% for Trump.

Political analysts are closely watching Florida (29 electoral votes), and predicting that Trump’s chances of reelection rest squarely on capturing the Sunshine State as he narrowly did in 2016. Consider that no Republican presidential candidate since Calvin Coolidge in 1924 has won the White House without Florida. The average of state polls has Biden up by one point.

Democrats built an early lead among those who had come out early to vote, but a Republican surge has helped eat away at that advantage in a state known for its razor-thin margins (Bush-Gore in 2000 anyone?) .

It’s likely going to come down to the state’s Latino vote. Recent polling suggests Biden is underperforming with Cuban Americans in Miami-Dade, the largest county in the state, as well as with Latino voters across Florida, which has backed the national winner in every election except one since 1964.

More:Biden is getting trounced with Cuban American voters in Florida, a trend that could tip the state to Trump

Georgia (16 electoral votes) has not gone blue since Bill Clinton won the Peach State in 1992. Trump won the state by 5.1 points. The average of state polls show both candidates neck-and-neck with the president pulling narrowly ahead of Biden in recent polls.

A Monmouth University poll conducted last week found that more than half (58%) of registered voters in the state said they have already cast their ballots. Biden leads among this group by 55%-43%, but the president has an advantage (48%-44%) among those who have yet to vote.

Trump won Iowa (six electoral votes) in 2016 by a comfortable margin: nearly 10 points. But the president is winning only by a little more than 1 point, according to the average of state polls.

Biden’s chances may hinge on how much farmers in the Hawkeye State blame Trump’s trade tariffs for their economic woes.

Ohio (18 electoral votes) is another must-win for Trump, who won the state by more than eight points in 2016 but now finds the Buckeye State a dogfight this year. Averages of state polls find Trump rising in recent polls and now holding a 1.2 point edge after the former vice president was leading for weeks.

Trump has made a personal pitch to the state, stressing his support for manufacturing jobs and trade deals he believes will benefit a state that has picked every winner since Lyndon Johnson in 1964.

Two states to watch that will signal a blowout: If Trump wins Nevada or Biden wins Texas.

So it might seem odd to call the Granite State a long-shot for Trump but each of the six state polls conducted in October has Biden up by at least eight points.

Analysts believe Biden has a better shot at winning Texas (29 electoral votes) than Trump does of capturing New Hampshire given that the polling average in the Lone Star State has the president ahead only by 1.2 points.

He won the state by nine points four years ago and no Democrat has won since Carter in 1976.