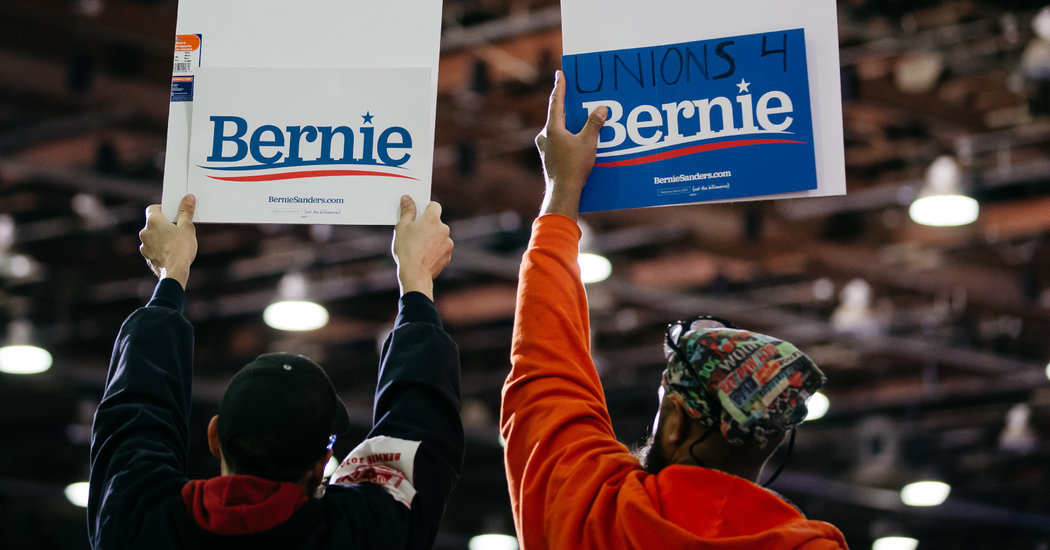 “I’ve been very fortunate, I’ve been the beneficiary of white male privilege my whole life,” said Mr. Burdick, 65, who owns a small business in Western Michigan. “It’s not fair. We’ve got to change the dynamics.”

He and his wife, Mary Lukens, are anxious about putting a daughter through college, saving for retirement and shouldering up to $30,000 a year in health costs. “All these economic issues that Sanders brings up are something that we experience daily,” Ms. Lukens said.

At a Sanders rally here on Sunday, the couple skewed older than most others by about a generation, though they shared the disdain of the Sanders youth brigade for moderate Democrats like Joseph R. Biden Jr. “Growing up during Nam, you look around and just want a choice for a change,” Mr. Burdick said. “You know what — we were right back then and we’re right now.”

With Mr. Biden the beneficiary of a surge after carrying 10 states on Super Tuesday last week, Sanders supporters in Michigan, which votes Tuesday, know they are his firewall in the first of several Midwest states going to the polls in the next two weeks, likely writing his fate.

Even as Mr. Biden is heading a bandwagon with former 2020 rivals and moderate Democratic voters clambering aboard, Mr. Sanders has a loyal base that is emotionally bound to him, an attachment rooted in their own economic struggles and lived experiences, rather than triangulating the most electable candidate.

Tuesday’s primary contests, in six states including Missouri and Washington, are unfolding against a backdrop of high anxiety over the economic and health consequences of the coronavirus outbreak. For most Sanders voters, plummeting stock prices matter less than the broader injustices he champions around wage inequality, health care and student loan debt.

If Mr. Sanders defies expectations in Michigan, a state he won in the 2016 primary, it will be because his all-out efforts here over the last four days succeeded in broadening his support, reversing the demographic trends that broke against him on Super Tuesday.

While doubling his organizing staff in the state to 25, he is running TV ads that attack Mr. Biden on trade and Social Security, expanding his outreach to voters and holding a multitude of events.

Meanwhile, a confident Mr. Biden scheduled only one visit to the state in recent days, on Monday, when he planned a rally in Detroit with Senators Kamala Harris and Cory Booker. Mr. Booker endorsed the former vice president on Monday. Earlier he sent Senator Amy Klobuchar for a couple of low-key events.

On Sunday, according to campaign counts, Mr. Sanders drew crowds of more than 7,000 in Grand Rapids, where the Rev. Jesse Jackson, the two-time presidential candidate, endorsed him, and over 10,000 in Ann Arbor, where he was introduced by America’s second most popular democratic socialist, Representative Alexandria Ocasio-Cortez of New York.

“In order for us to win we have to grow, we must be inclusive, we must bring more people into this movement,” Ms. Ocasio-Cortez said.

One possible sign of progress in widening his coalition is that former supporters of Senator Elizabeth Warren, who dropped out of the Democratic presidential race last week but has yet to make an endorsement, were not hard to find in the Sanders multitudes. One of them, Tom Sapkowski, said, “I don’t think Biden’s a hard enough left turn.”

Mr. Sapkowski, who worked 35 years “turning wrenches” as an auto mechanic, has lived the contradictions of the American economy, where unemployment is low but incomes for those who aren’t rich feel like they’ve flatlined. “Things have not changed for the middle class for the past 50 years,” he said. He remembered “during the Clinton administration where I made like 80, 90 grand, but apparently that was too much.”

His wife, Kim, who lost her job as an education administrator in January, said: “I was just thinking this morning, my dad, he was 58 when he retired from the telephone company. He had a very nice retirement. Belonged to the union. And here I am 55 and nowhere near to retiring.”

Younger voters often brought up the huge burden of college debt for their generation, which Mr. Sanders proposes to cancel.

At a rally on Saturday in Flint, as well as one on Friday in Detroit — both cities with majority black populations — the Sanders supporters were largely a sea of white faces. They revealed that Mr. Sanders has not overcome his weakness with black voters. Despite years of outreach to African-Americans since his loss to Hillary Clinton in the 2016 Democratic race, Mr. Sanders saw black voters choosing his rival in Southern states on Super Tuesday.

He won Michigan that year — the high-water mark of his campaign — by carrying white voters, especially whites without a college degree, who represented more than one in three voters. Winning those voters again not just in Michigan but in Ohio and Illinois, which vote on March 17, undergirds Mr. Sanders’s hope for a comeback.

His TV ads and his speeches hammer Mr. Biden for supporting trade deals including the North American Free Trade Agreement, reviled by many factory workers, and for past statements suggesting an openness to cutting Social Security.

“This city got destroyed by NAFTA,” said Glenn Chatters, a Sanders supporter in Flint, who works as a heating and air conditioning installer. In 1992, he voted for the third-party candidate Ross Perot because of his warnings about trade deals.

He is hopeful, if not entirely optimistic, that Mr. Sanders can again win working-class white voters in Michigan, many of whom in 2016 may have been voting against Mrs. Clinton and have since been lost to President Trump.

“I hope that people actually stop and listen to what he actually has to say, instead of the party lines,” Mr. Chatters said. “Sometimes people are so swayed by the term ‘socialism’ when they’re driving on their free roads, they’re taking their kids to the free school.”

In the Super Tuesday primaries, it was Mr. Biden who won working-class white voters, helping him to carry Northern states including Maine and Minnesota, an ominous sign for Mr. Sanders. Stanley Greenberg, a Democratic pollster, said he was skeptical of Mr. Sanders’s ability to repeat his 2016 Michigan win, or his chances elsewhere in the Midwest, because Democrats this year, who singularly want to beat Mr. Trump, are less open to revisiting arguments over trade or Social Security.

“Voters, astonishingly, have taken over the nominating process,” he said. “Biden did well among blacks, suburban whites and white working-class voters because they want him to take on Trump. That was so powerful on Super Tuesday.”

Most Sanders supporters said they would grieve his failure to win the nomination if it comes to that, but they would vote for Mr. Biden in November. But not all.

In Flint, the fiery Harvard professor Cornel West, a Sanders surrogate, wound up the crowd by accusing Mr. Biden of being “a neoliberal,” eliciting hearty boos. Afterward, an audience member, Bob Granville, echoed the critique. Neoliberalism, he said, “means socialism for the rich and a rugged capitalism for everyone else.”

If Mr. Biden is the nominee, said Mr. Granville, a retired work-force trainer, he plans to vote for a third-party candidate in protest. “People say, oh, you’re going to be part of letting Trump in there. I say, if you’re going to run Biden, we deserve Trump.”

Despite the avowed desire of the Sanders campaign to broaden his appeal, Mr. Sanders himself has a penchant for pushing away moderate voters he needs by frequently attacking the Democratic “establishment.” On Sunday, he accused party leaders of forcing Ms. Klobuchar and Pete Buttigieg, the former mayor of South Bend, Ind., out of the race to help Mr. Biden “and try to defeat me.”

David Betras, a former Democratic chairman of Mahoning County, Ohio, in an industrial region where Mr. Trump did well in 2016, said he feared that the more Mr. Sanders attacks “the establishment,” the more enraged his supporters will become, with many likely to sit out the general election. “His supporters are fervent and will feel betrayed by Democrats.”

That is not an inevitability. Mr. Sanders explicitly tells supporters in nearly every speech that he will back Mr. Biden as the nominee.

And there are anecdotal signs that Mr. Sanders may be growing support.

Eric Mays, a city councilman in Flint, arrived as an undecided voter to his rally there on Saturday, which was billed as “a town hall on racial and economic justice.”

“Bernie has got me fired up,” he said. “I might very well be voting Bernie on Tuesday.”

Mr. Mays said that despite the overwhelming support of black voters in Southern states for Mr. Biden, Michigan could break differently. “We know Bernie Sanders will get black voters out of Flint,” he said.

“I hope that we see him all the way through this year.”