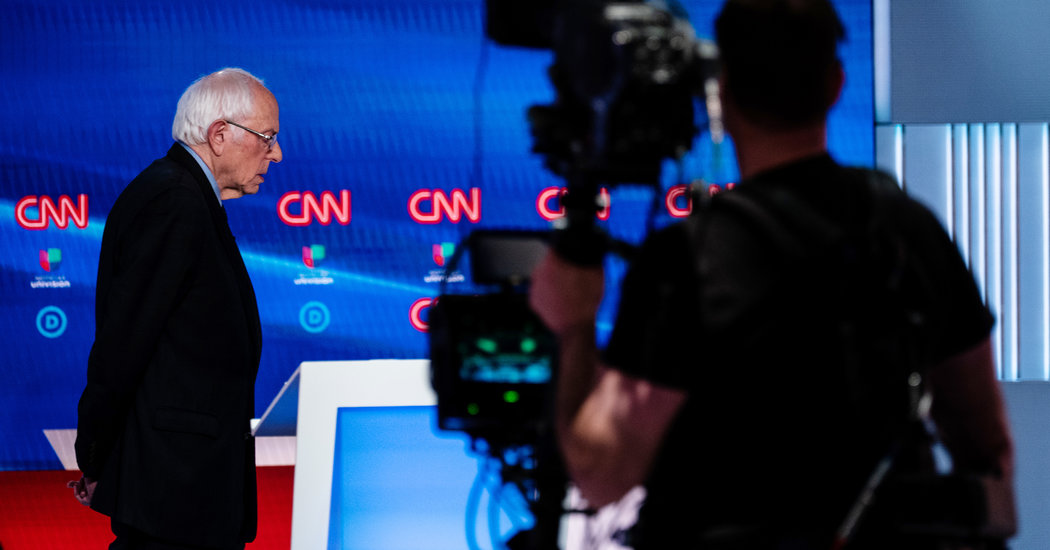 Senator Bernie Sanders and his advisers were weighing his next steps on Wednesday morning after he lost primaries in three more states, with some Democrats growing increasingly vocal that he should consider exiting the race amid a national health emergency caused by the coronavirus.

Hours after former Vice President Joseph R. Biden Jr. widened his delegate lead over Mr. Sanders — with resounding victories in Florida, Illinois and Arizona on Tuesday — Mr. Sanders’s campaign manager, Faiz Shakir, said the Vermont senator was assessing his options but suggested a decision on how to proceed was not imminent.

“The next primary contest is at least three weeks away,’’ Mr. Shakir said in a statement. “Senator Sanders is going to be having conversations with supporters to assess his campaign. In the immediate term, however, he is focused on the government response to the coronavirus outbreak and ensuring that we take care of working people and the most vulnerable.”

Some Sanders aides and supporters were beginning to acknowledge that his path to the Democratic nomination had become almost impossibly narrow.

But there have been signs in recent days that Mr. Sanders wanted to forge ahead and make a case that he sees no one else making: That the coronavirus pandemic has brought new urgency to his calls for “Medicare for all.” On Tuesday night before most polls closed, he released a list of proposals to deal with the crisis, including that Medicare cover all medical bills and provide $2,000 cash payments to every American each month.

Whether to stay in the race is a decision that ultimately rests with Mr. Sanders and his wife, Jane, but some of his aides and supporters see no real downside in sticking it out, at least in the short term. Many recognize that he is eager to continue pushing a message that he has championed for decades — and that he is singularly focused on keeping his political movement alive. And after years of being excluded from what he sees as the party’s establishment clique, he is also still determined to show that he is a superior candidate to Mr. Biden, whom he views as the establishment’s choice, some close to him say.

As of Wednesday, the most conspicuous Sanders booster was President Trump himself, who seemed to lament the imminent end of a fight he believed would advantage him. “The DNC will have gotten their fondest wish and defeated Bernie Sanders, far ahead of schedule,” Mr. Trump wrote on Twitter. “Now they are doing everything possible to be nice to him in order to keep his supporters. Bernie has given up, just like he did last time. He will be dropping out soon!”

As the results came in on Tuesday, some Democrats were declaring the race effectively over and openly calling for him to drop out, suggesting that Mr. Sanders would look out of step with the moment if he stayed in a race he had no chance of winning, especially when the country is contending with a deadly virus outbreak.

“Bernie is getting beat by 30 and 40 points, it’s over,” said Representative Don Beyer of Virginia. “This is the adult thing to do — knowing when it is time to disappear.”

Even some of his own allies were admitting that Mr. Biden would likely be the party’s nominee.

“Tonight is a really good night for Joe Biden, and it looks like he will be the presumptive nominee,” Alexandra Rojas, the executive director of the progressive group Justice Democrats, said on CNN on Tuesday night. But she suggested that forcing Mr. Sanders to drop out would “shame” his supporters and deprive them of their ability to vote for their preferred candidate.

Officials close to Mr. Biden say they are keenly sensitive to not being perceived as pushing Mr. Sanders too hard — although that is what many of them want to do. In a series of staff and surrogate calls over the past week, Biden aides have emphasized that point and increasingly pushed for an approach in which Mr. Biden begins to ignore Mr. Sanders altogether and instead tries to turn the race into a binary contest between himself and Mr. Trump, according to people familiar with the campaign’s strategy.

And Larry Cohen, a longtime Sanders confidant who is chairman of Our Revolution, the political organization that spun out of the 2016 Sanders campaign, said it was not in Mr. Sanders’s nature to drop out before all the primaries are over, “but the pandemic and the current delegate count could lead to a different outcome.”

“The delegate count speaks for itself,” he said.

Already, public health concerns have prevented Mr. Sanders from holding his signature rallies and relegated his supporters to phone banking rather than canvassing in person door-to-door. And on Tuesday morning, his top spokesman, Mike Casca, said in a statement that the campaign was not conducting “get out the vote” outreach and was instead “making clear to voters that we believe going to the polls amid the coronavirus outbreak is a personal decision.”

Ohio, Georgia, Louisiana, Kentucky and Maryland have postponed their primaries, and more states could follow, raising the possibility that a significant portion of the election season could stretch well into June.

It is possible Mr. Sanders could stay in the race to collect delegates in order to accumulate leverage and bolster progressive power in party reform — while running what effectively amounts to an inactive campaign as he focuses on his legislative agenda around the coronavirus.

So far Mr. Sanders has not yet been abandoned by a critical mass of his supporters. Robert Reich, the former labor secretary, said Monday that the time had come for Mr. Sanders to concede the nomination to Mr. Biden, but few other Sanders supporters have done so — even while they acknowledge his motivation may be something different from winning the party’s nomination.

Mr. Sanders, “in his career in public life, has been committed to ideas even when the ideas weren’t captivating the public,” said Representative Mark Takano of California, who endorsed Mr. Sanders last week. “These next several primaries are about, I think, keeping those ideas in the forefront.”