Joseph R. Biden Jr. and Senator Bernie Sanders called for vastly more aggressive government action to battle the coronavirus but split over some of the details along familiar ideological lines on Sunday night, as the two Democrats tangled over the right to lead their party into a campaign overshadowed by the pandemic inflicting havoc on the country’s economy and its social fabric.

In their first one-on-one debate of the primary race, Mr. Sanders, a democratic socialist from Vermont, demanded sweeping economic reform and the creation of a single-payer health care system to address crises like the virus. Mr. Biden said he would call up the military to help and enact a “multi-multi-billion dollar program” of disease containment and economic rescue, and said that there were more issues at hand that could not wait on reinventing the health care system.

Mr. Biden, the former vice president, said managing the coronavirus was “like a war,” while Mr. Sanders said it had exposed “the dysfunctionality” of the country’s patchwork health care system.

Yet on matters beyond the virus, the two men careened from making gestures toward party cohesion and personal comity to clashing over their divergent policy agendas and records in office.

Mr. Biden repeatedly sought to play down criticism from Mr. Sanders and to play a unifying role. He offered lengthy praise for a proposal by Senator Elizabeth Warren of Massachusetts, his progressive former rival, to reform the bankruptcy code, and in a striking commitment he made an ironclad pledge to name a woman as his running mate. Mr. Sanders said that “in all likelihood” he, too, would choose a female running mate.

But Mr. Sanders persistently challenged Mr. Biden over his positions on core Democratic issues, leaving the former vice president struggling to explain — and in some cases misrepresenting — his past record on matters like funding Social Security and the war in Iraq. And Mr. Biden also went on offense, especially over Mr. Sanders’s history of praising leftist governments in Latin America.

Still, with Democrats single-mindedly focused on defeating President Trump, and with the country as a whole dismayed by a growing pandemic, both candidates offered assurances of mutual support for the general election. “It’s much bigger than either of us,” Mr. Biden said, vowing to campaign for Mr. Sanders if he were the nominee.

“If I lose this thing, Joe wins — Joe, I will be there for you,” Mr. Sanders promised.

Their sparring represented what may be the last vestiges of a once-uncertain contest that — after his commanding victories over the past two weeks — now clearly favors Mr. Biden. Indeed, the growing threat of the coronavirus, combined with the former vice president’s significant advantage in delegates, lowered the debate stakes and might have rendered it most memorable for Mr. Biden’s promise to choose a woman as his running mate.

He has been widely expected to do so, but his pledge was sure to draw attention, fuel speculation about who the woman may be and generally tilt attention toward the general election and away from the primary race. 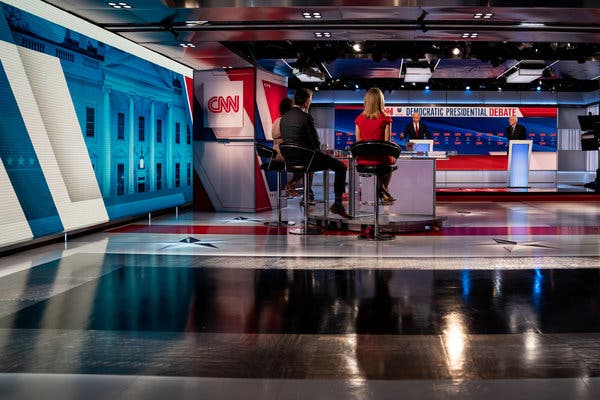 Because of the coronavirus crisis, the debate was held in a CNN studio with no audience present.Credit…Erin Schaff/The New York Times

The specter of the coronavirus pervaded their encounter from their first moments onstage: Mr. Biden and Mr. Sanders declined to shake hands at the start and stood six feet apart from each other at a television studio in Washington, D.C., following the guidelines for social distancing prescribed by public health authorities. In deference to the same regulations, the debate took place without a live audience.

Mr. Biden and Mr. Sanders approached each other at first with caution, splitting over matters of policy but largely declining to go on the attack in sharp terms, before clashing in a feistier manner as the event wore on. Their early restraint was notable, because the debate was their first encounter since Mr. Biden reclaimed his once-wobbly status as the Democratic front-runner and Mr. Sanders lost the surging momentum he captured in the race for a time last month.

Where the two men agreed was in deploring Mr. Trump’s approach to the coronavirus, and in demanding a more far-reaching government strategy to contain the outbreak and patch up the economic wreckage it is causing. Mr. Biden argued that every resource of the government should be mobilized to limit short-term damage, while Mr. Sanders said that countering it would require a more drastic overhaul of economic and health care systems.

“This is like we are being attacked from abroad,” Mr. Biden said. “This is something that is of great consequence. This is like a war.”

Mr. Sanders called the coronavirus crisis an “unprecedented moment in American history,” and said it drew attention to the fact that the country lacked “a system that is prepared to provide health care for all people.”

In an early barb directed at Mr. Biden, Mr. Sanders said it would take a direct confrontation with the insurance and pharmaceutical industries to remedy the situation, including enacting his proposal for a “Medicare for all”-style system that he has championed.

“Do we have the guts to take on the health care industry, some of which is funding the vice president’s campaign?” Mr. Sanders asked.

But Mr. Biden pushed back aggressively on the notion that Mr. Sanders’s signature proposal could mitigate the virus, invoking Europe’s hardest-hit country.

“With all due respect to Medicare for all, you have a single-payer system now in Italy,” he said, arguing that such a system “would not solve the problem.”

Beyond their familiar disagreements on health care, Mr. Sanders leveled a larger critique of Mr. Biden’s approach to leadership, accusing him of compromising too readily with Republicans and corporate interests. He also challenged the former vice president over decades’ worth of votes on abortion, gay rights, foreign wars, bankruptcy regulation and retirement-security programs.

At times, the debate became a kind of tense colloquy between longtime colleagues, as Mr. Sanders prodded Mr. Biden to account for his past positions.

In the most heated moments, the two candidates scolded each other by name — interjecting “Joe!” and “Bernie!” — and showed visible exasperation. Mr. Biden laughed at one of Mr. Sanders’s rebukes and muttered “Give me a break” when the Vermont senator urged him to disavow a super PAC supporting his campaign.

“I won’t give you a break on this one, Joe,” Mr. Sanders said. “You’ve condemned super PACs. You’ve got a super PAC. It’s running negative ads.”

Indeed, Mr. Sanders repeatedly forced Mr. Biden onto the defensive, leading the former vice president to play down or misstate portions of his own record. Challenged by Mr. Sanders for his role championing bankruptcy legislation backed by the credit card industry, Mr. Biden said he did not help write the legislation and “made it clear to the industry that I did not like the bill” — though Mr. Biden was among its most vocal Democratic supporters.

Pressed by Mr. Sanders about his past comments in the Senate suggesting it could be necessary to rein in Social Security and other popular entitlement programs, Mr. Biden gave a halting series of answers that prompted Mr. Sanders to urge him to “be straight with the American people.”

Mr. Biden was not shy about defending other elements of his record from his liberal rival: When Mr. Sanders dismissed the 2008 bailout of the financial sector as a gift to Wall Street executives, Mr. Biden chided him and argued that if the banks had not been stabilized the country would have plunged into “a great depression.”

“All those people Bernie said he cares about would have been in deep trouble,” Mr. Biden said.

Mr. Biden confronted Mr. Sanders with some of his past votes as well, including his opposition to some gun-control legislation.

Two days before Florida’s crucial primary, Mr. Sanders came prepared with an answer about recent comments that have set off a wave of criticism — his praise for some elements of Fidel Castro’s rule in Cuba. He vowed that as president he would “put the flag down” for “democracy and human rights.”

But when he was pressed by Mr. Biden and the moderators, Mr. Sanders returned to his longstanding position that it was possible to condemn authoritarians while also praising positive elements of their governments. He held up China, which he said had made significant strides in reducing poverty, a comment that prompted Mr. Biden to assail him for praising “a dictatorship.”

Even as they feuded, the candidates stopped well short of the kind of scorched-earth attacks that have characterized the climactic debates in past nomination fights, including both the Democratic and Republican primary campaigns in 2016.

After one extended attack on him, Mr. Biden good-naturedly noted that he had tried to give Mr. Sanders “credit for some things” but that he was “making it harder for me,” causing the Vermont senator to smile.

Both candidates highlighted their own new habits: online gatherings instead of in-person campaign rallies and no more handshaking — and lots of handwashing. “I’m using a lot of soap and hand sanitizers,” Mr. Sanders said. Added Mr. Biden, “I wash my hands God knows how many times a day with hot water and soap.”

Mr. Sanders addressed a broader electoral issue in an interview on CNN after the debate, when asked if the primaries in four states on Tuesday should go on. “That is a very good question,” he said, adding that he was “not sure it makes a lot of sense” to have older people who are susceptible to the virus gathered at polling places.

The debate showed Mr. Sanders in fighting form, and perhaps sounding further away from conceding than Mr. Biden’s camp had hoped. After the debate, Anita Dunn, Mr. Biden’s chief strategist, likened Mr. Sanders to a political demonstrator, saying the former vice president had spent the debate “graciously dealing with the kind of protester who often shows up at campaign events, on live television.”

The forum on Sunday was originally set to be held in Phoenix, before a live audience. But in a series of incremental announcements over the past week, CNN and the Democratic National Committee declared that there would be no live audience; that the debate would be moved to Washington; and that one of the planned moderators, Jorge Ramos, would be replaced because he might have been exposed to the coronavirus.

The unusual circumstances reflected a larger freeze in the presidential campaign: Mr. Biden and Mr. Sanders have all but halted public campaign activity since last week’s primaries.

Both candidates are in their late 70s and could face the risk of contracting the virus themselves from prolonged exposure to large numbers of voters. Aides to Mr. Biden, 77, and Mr. Sanders, 78, have said that neither man has been tested for the virus or shown any symptoms of the disease.

Amid the slowdown in campaigning, Mr. Biden and Mr. Sanders have been trying to match their core themes to the moment of crisis. There is now a general view among all of the political campaigns — including Mr. Trump’s — that the coronavirus could well redraw the existing contours of the presidential race. The crisis might undermine Mr. Trump’s plans to run on promises of continued prosperity and instead focus public attention above all on the difficult process of managing a contagion and rebuilding a shaken economy.