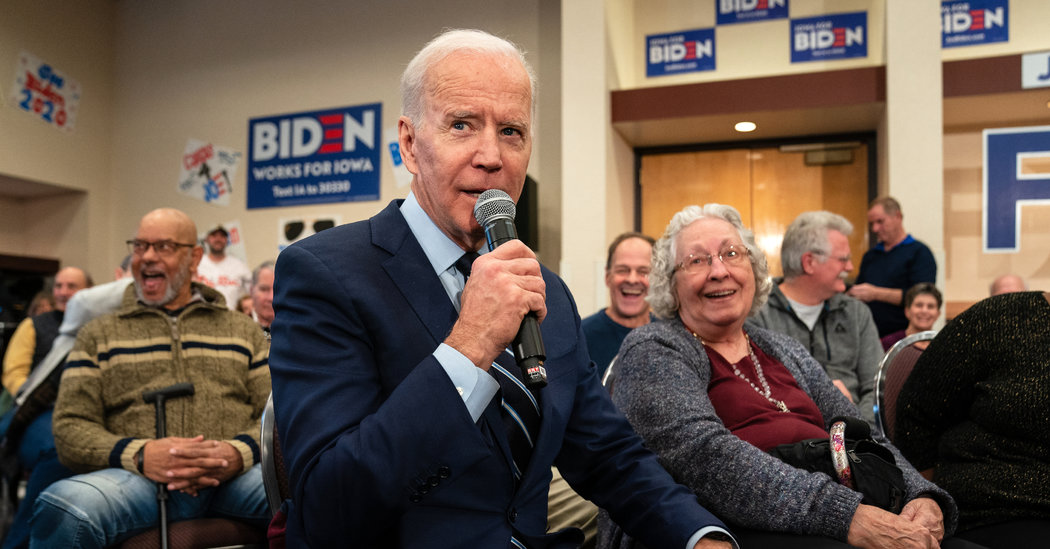 MASON CITY, Iowa — A day after former Vice President Joseph R. Biden Jr. and Senator Bernie Sanders appeared to have brokered a truce after weeks of tension, Mr. Biden released a video on Tuesday night suggesting the Sanders campaign was engaging in “dishonest attacks” and Mr. Sanders responded with a video of his own criticizing Mr. Biden over his Social Security record.

The escalation between the two leading presidential candidates, who are competing for an overlapping slice of blue-collar voters here in the leadoff caucus state, came on the same day that an explosive interview with Hillary Clinton landed, in which the 2016 Democratic presidential nominee blasted Mr. Sanders in starkly personal terms.

Mr. Sanders, a senator from Vermont, is required on Capitol Hill for President Trump’s impeachment trial, and will have only limited ability to respond on the campaign trail and in local media markets with less than two weeks before the Iowa caucuses.

“Bernie’s negative attacks won’t change the truth: Joe Biden is still the strongest Democrat to beat Donald Trump,” says the video that Mr. Biden tweeted on Tuesday evening. The video is a social media spot with no money behind it, according to Mr. Biden’s campaign.

In an interview on MSNBC’s “Morning Joe” on Wednesday morning, Mr. Biden demurred when asked if the attacks from the Sanders campaign were dishonest. But he also invoked Mr. Sanders’s record on guns, drawing attention to a potential vulnerability for Mr. Sanders.

In recent weeks, the Sanders campaign has indeed been intensely critical of Mr. Biden: over his vote to authorize the war in Iraq, a record Mr. Biden has repeatedly mischaracterized; over Mr. Biden’s long record on Social Security, issuing at least one false attack, according to the fact-checking outlet PolitiFact; and over his reliance on high-dollar donors, with a prominent Sanders surrogate claiming in an op-ed article on Monday that Mr. Biden had “a big corruption problem.”

Mr. Sanders’s campaign circulated the article. But by the end of the day, Mr. Sanders had told CBS News that “it is absolutely not my view that Joe is corrupt in any way. And I’m sorry that that op-ed appeared.” Mr. Biden, who has also been critical of the Sanders campaign and claimed without evidence on Saturday that Mr. Sanders’s team was promoting a “doctored” video about his Social Security position, tweeted his thanks.

Yet by Tuesday afternoon, the Biden campaign was fund-raising off the candidates’ clashes, repeating a tactic from over the weekend.

“Bernie Sanders’ campaign has unleashed a barrage of negative attacks, lying about and distorting Joe’s record,” read a fund-raising text message. Still, Mr. Biden acknowledged Wednesday on MSNBC that Mr. Sanders had personally apologized for the corruption op-ed and said he accepted the apology.

The video and the fund-raising appeal centered on a recent Sanders campaign claim that Mr. Biden had praised former Speaker Paul D. Ryan, Mr. Biden’s 2012 rival for the vice presidency, in support of making cuts to Social Security. PolitiFact found that claim to be false and lacking context.

But it is the case that throughout his decades in public life, Mr. Biden, a former senator from Delaware, has supported freezes and proposals that worried some Social Security advocates.

“Bernie’s campaign is not telling the truth,” Mr. Biden’s video says, going on to detail his record on the matter and to say that his current plan would protect Social Security and increase benefits.

He added: “Let’s be clear about why: He’s trying to distort his decades-long record of proposing and voting for cuts to Social Security benefits for millions of people. Joe Biden is no defender of Social Security, and a negative ad won’t help him outrun his record.”

Mr. Sanders is seeking to cut into Mr. Biden’s base of older caucusgoers in Iowa, seizing on an issue of great significance to them.

“Let’s be honest, Joe,” Mr. Sanders wrote as he tweeted out his own video on Tuesday, using Mr. Biden’s own words from years ago about freezing Social Security. “One of us fought for decades to cut Social Security, and one of us didn’t. But don’t take it from me. Take it from you.”

“It’s like my going back and pointing out how Bernie voted against the Brady Bill five times while I was trying to get it passed when he was in the House, or how he voted to, you know, protect gun manufacturers,” Mr. Biden said. “It’s the only group in America you can’t sue. I mean, he’s made up for that. He’s indicated that was past.”

Mr. Biden was referring to Mr. Sanders’s votes against the Brady Bill, which required background checks for gun purchases, in the 1990s, as well as his 2005 vote for a bill that shielded gun manufacturers and dealers from liability lawsuits. Mr. Sanders faced criticism for those votes from Hillary Clinton during the 2016 Democratic primary.

Asked about his opposition to the Brady Bill in a recent interview with the editorial board of The New York Times, Mr. Sanders said the world had since “changed” and mass shootings had proliferated.

“I come from a state that until two years ago had no gun control at all. Zero. O.K. People of Vermont have changed, and I certainly have changed on that issue,” he said. “There is now in Vermont, and all over this country, disgust at the level of mass shootings and gun violence in general. And I will have an administration that will have a gun policy second to none.”