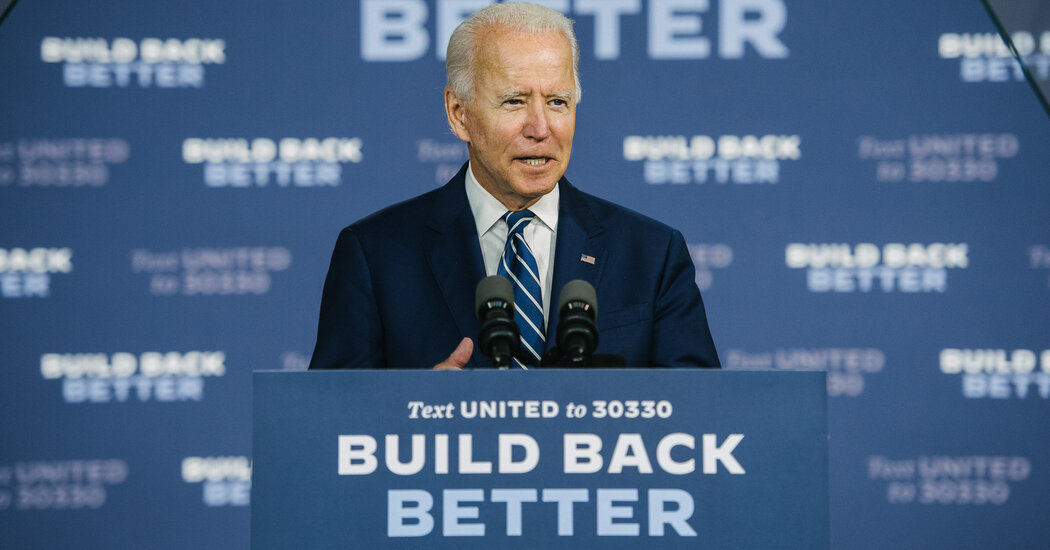 Joseph R. Biden Jr. announced a sweeping new $775 billion investment in caregiving programs on Tuesday, with a series of proposals covering care for small children, older adults and family members with disabilities. His campaign hopes the plan will land with particular resonance during a pandemic that has severely affected the caregiving needs of millions of American families.

The proposals, outlined in a speech near his home in Delaware, were the third of four economic rollouts that Mr. Biden, the former vice president and presumptive Democratic nominee, is doing before the Democratic National Convention next month. He is seeking to blunt one of the few areas of advantage — the economy — that President Trump maintains even as Mr. Trump’s overall standing has dipped.

“Families are squeezed emotionally and financially,” Mr. Biden said in the speech. “They need help, but too often they can’t afford it.”

Professional caregivers, he added, “are too often underpaid, unseen and undervalued.”

Mr. Biden’s proposals are intended to appeal to voters who are now more acutely aware of how essential caregivers are, as the health crisis has shuttered schools — a source of child care for many Americans — and limited the options to care for older relatives who are more vulnerable to the coronavirus.

But they are also aimed at the caregivers themselves, promising more jobs and higher pay. His campaign estimated that the new spending would create three million new jobs in the next decade, and even more after accounting for people able to enter the work force instead of serving as unpaid, at-home caregivers.

Mr. Biden’s ideas are in line with what other Democrats have proposed and what researchers have demonstrated could help working families, but it is notable to make caregiving a central issue in a presidential campaign.

“Care has largely been ignored, certainly in presidential elections, so it’s really exciting to see specific plans that would really move the needle,” said Taryn Morrissey, who studies child and family policies at American University. “This would change families’ finances.”

In a conference call outlining the plan on Monday night, the Biden campaign framed caregiving help as an economic imperative to keep the country competitive globally, and to enable it to recover from the economic crisis brought on by the pandemic. The United States is the only rich country without paid family leave and has no universal child care; research has shown that labor force participation has stalled because of that.

But advisers to Mr. Biden, whose campaign has made empathy a central component of his 2020 candidacy, also repeatedly invoked the former vice president’s own history as a single father. Mr. Biden’s first wife and his 1-year-old daughter died in a car accident in 1972, shortly before he was first sworn into the United States Senate. His two sons survived the accident.

In his speech, Mr. Biden recalled the years after the accident and other difficult periods in his life, like when his son Beau Biden had brain cancer.

“We know what it’s like,” Mr. Biden said. “We know so many of you are going through the same thing without the kind of help I had.”

To address care for older people and people with disabilities, the Biden campaign announced proposals to eliminate the waiting list for home and community care under Medicaid, which has roughly 800,000 people on it; provide fresh funding to states and groups that explore alternatives to institutional care; and add 150,000 new community health workers. The campaign said that coronavirus outbreaks in nursing homes had highlighted the necessity of providing care for aging adults at home.

For young children, Mr. Biden is proposing to start with a bailout for child care centers, many of which are at risk of closing amid the pandemic because they are financed almost entirely by private payments. Even before lockdowns began, they operated on very small profit margins.

Mr. Biden also proposed national pre-K for all children ages 3 and 4, and his campaign pointed to research that has shown that such programs help women work and shrink racial and socioeconomic achievement gaps.

For parents of younger children, he proposed an $8,000 child care tax credit per child, up to $16,000, for families earning less than $125,000. It would be refundable so parents who did not pay much in taxes could still collect it. Or families earning less than 1.5 times the median income in their state could choose subsidized child care, so they would pay no more than 7 percent of their income. The lowest earners would pay nothing.

The plan would address the dearth of child care by providing financing for the construction of new child care facilities, including at workplaces and in rural areas, and expanding after-school and summer options and care for people who work nontraditional hours.

Mr. Biden’s plan also calls for increased pay for child care workers — who are disproportionately women and minorities — along with health benefits, career training and the ability to unionize. On average, preschool teachers in the United States earn less than $30,000 a year, while kindergarten teachers earn over $50,000, according to researchers at the University of California, Berkeley.

The plan would provide benefits for people who care for family members instead of working for pay, an idea that has recently gained support from both parties. It would give unpaid caregivers a $5,000 tax credit as well as Social Security credits.

Though Mr. Biden had previously called for public pre-K, paid family leave and elder care, this is the most detail he has given about what those plans would look like and about additional ideas he has for helping caregivers. During the Democratic primary, Senators Elizabeth Warren and Bernie Sanders were at the forefront of family policies, and each proposed universal child care, beginning at birth. Even now, Mr. Biden has not gone that far. Other of the senators’ ideas, like raising preschool teachers’ pay, are included in his new proposals.

The Trump administration has also proposed policies for items like paid family leave and affordable child care, an effort led by the president’s daughter Ivanka Trump, who has framed the initiatives as economic ones. Politically, family policies appeal to a group that both parties are trying to court, suburban women.

Yet very few family policies have been put into place while Mr. Trump has been in office, and the ones that have, like an expanded child tax credit and more money for child care for low-income families, have been minimal and have not reached all the families that need help.

In response to the pandemic caregiving crisis, Democrats have introduced bills to provide more parents with paid leave while schools are closed and to invest billions to save the child care industry, but most Republicans have not supported them.

In general, Republicans have resisted any caregiving policy that would be paid for through a tax increase, which most of the Democratic plans would. For example, Mr. Trump has endorsed a bipartisan bill that would provide leave for new parents by letting them collect their own future child tax credits early and receive smaller credits later.

Mr. Biden’s campaign said the newly proposed programs, some of which would be operated with state and local officials, would be paid for by rolling back some taxes on real estate investors with incomes over $400,000, as well as by increasing tax enforcement on the wealthy.

In response, the Trump campaign tried to draw attention to the cost of Mr. Biden’s plan. “Instead of pro-job and pro-growth policies, Biden is turning to an old friend — tax hikes and big government,” an email from the campaign said.

Mr. Biden delivered his speech in New Castle, Del., not far from his home in Wilmington, where he has mostly stayed put since the coronavirus began shutting down the country in March. His first economic rollout was focused on reinvigorating manufacturing and strengthening “Buy American” rules; the second was on building the infrastructure of a new, greener economy; and the final one will be about advancing “racial equity,” the campaign has said.