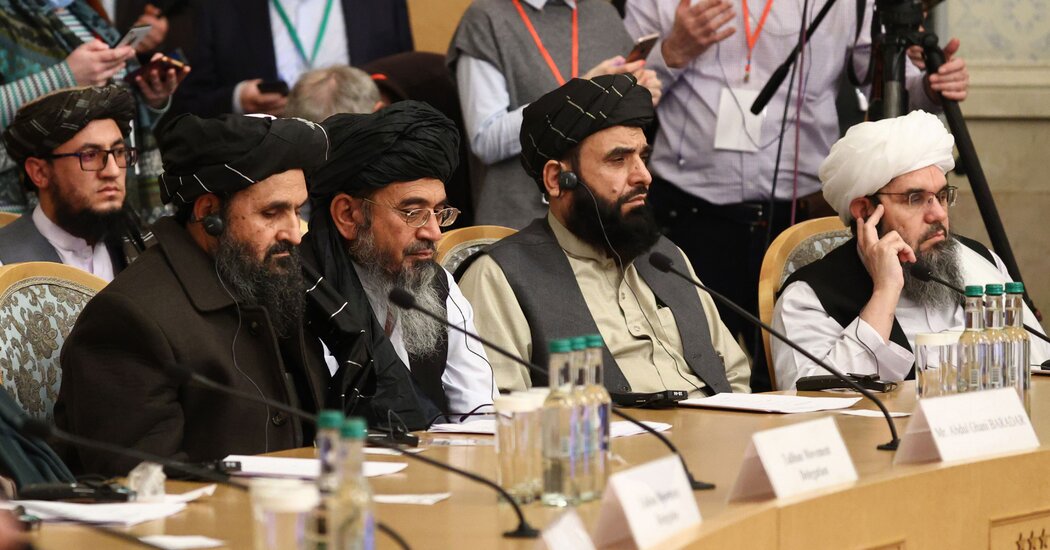 WASHINGTON — President Biden’s plan to withdraw American troops from Afghanistan has drawn sharp criticism that it could allow a takeover by the Taliban, with brutal consequences, particularly for the rights of women and girls.

In response, top Biden administration officials have offered a case for why the outcome may not be so dire: The Taliban, they say, might govern less harshly than feared after taking partial or full power — in order to win recognition and financial support from world powers.

That argument is among the most significant defenses against those who warn that the Taliban will seize control of Kabul and impose a brutal, premodern version of Islamic law, echoing the harsh rule that ended with the American invasion after the Sept. 11, 2001, attacks.

Secretary of State Antony J. Blinken made the case on Sunday on ABC’s “This Week,” saying that the Taliban must gain power through an organized political process and not through force “if it wants to be internationally recognized, if it doesn’t want to be a pariah,” he said.

On Wednesday, Mr. Blinken announced that the administration would work with Congress to expedite a commitment of $300 million in humanitarian assistance for Afghanistan, pledged last fall under the Trump administration.

“As the United States begins withdrawing our troops, we will use our civilian and economic assistance to advance a just and durable peace for Afghanistan and a brighter future for the Afghan people,” Mr. Blinken said in a statement.

In a background briefing for reporters after Mr. Biden’s withdrawal announcement last week, a senior administration official said the denial of international legitimacy would be a punishment for any effort to roll back human rights and women’s rights in the country.

Other U.S. officials and some prominent experts call this “pariah” theory valid, saying Taliban leaders have a record of seeking international credibility, placing a high priority on the removal of sanctions against them. Taliban officials have made clear their desire for foreign aid to rebuild their country after two decades of grinding war.

Some experts also believe that Taliban leaders have moderated in recent years, recognizing that Afghanistan’s cities have modernized, and note that the group’s peace negotiators have traveled internationally, seeing the outside world in a way its founders rarely, if ever, did.

To critics, however, such notions are tragically deluded, ignoring the Taliban’s fundamentalist ethos — and are thin cover for abandoning the country to a cruel fate.

“That’s a story we tell ourselves to feel better about leaving,” said Representative Tom Malinowski, Democrat of New Jersey, who served as the State Department’s top official for human rights in the Obama administration.

“There’s nothing we have to offer that will cause them to preserve the things they’ve been fighting to erase,” added Mr. Malinowski, who opposes Mr. Biden’s withdrawal plan.

Given the reality that Mr. Biden is removing all American troops by Sept. 11, diplomatic and financial pressure remain among the few tools the United States can use to constrain the Taliban. For the time being, the United States also will continue to supply military aid to Afghanistan’s government in hopes that its security forces will not be overrun.

But in the long term, there is almost no doubt that the Taliban will either become part of the Afghan government or take over the country entirely. How the United States will respond is unclear.

“Defining what is ‘acceptable’ for future Taliban influence in Afghanistan will be difficult,” said Jeffrey W. Eggers, who served as senior director for Afghanistan in the Obama White House and was an adviser to the top commander in the country, Gen. Stanley A. McChrystal.

Mr. Eggers said that it would be relatively straightforward to define and enforce expectations around the Taliban’s ties to terrorist groups such as Al Qaeda and the Islamic State. But social and human rights will be more challenging, he said.

Barnett Rubin, an expert on Afghanistan who served as senior adviser to President Barack Obama’s special representative for the country from 2009 to 2013, is among those who say they are hopeful that the Taliban can be tempered by nonmilitary means.

In a paper published last month by the United States Institute of Peace, before Mr. Biden’s announcement, Mr. Rubin contended that America “has overestimated the role of military pressure or presence and underestimated the leverage that the Taliban’s quest for sanctions relief, recognition and international assistance provides.”

Mr. Rubin added that the agreement Taliban leaders signed with the Trump administration in February 2020 committed Washington to beginning the process of removing U.S. and United Nations sanctions on the group, including some that are targeted at its individual leaders. It also featured a guarantee that the United States “will seek economic cooperation for reconstruction with the new post-settlement Afghan Islamic government.”

Gen. Joseph F. Dunford Jr., the former chairman of the Joint Chiefs of Staff, lent credence to the idea in February during testimony before Congress after a panel he helped lead, the Afghanistan Study Group, released a report.

“Sometimes we think we don’t have any leverage over the Taliban,” General Dunford said, saying that the group’s desire for sanctions relief, international legitimacy and foreign support may temper its violence.

Vanda Felbab-Brown, the director of the Initiative on Nonstate Armed Actors at the Brookings Institution, agreed that top Taliban leaders placed a high value on relations with the international community, if only to secure development funding.

“There is a real understanding at the leadership level, not just fake posturing, that they don’t want to bankrupt the country to the same extent they did in the 1990s,” said Ms. Felbab-Brown, who has spoken extensively with Taliban officials and commanders. “In the 1990s, the bankrupting was not inadvertent — it was a purposeful policy that sought to address the troubles of Afghanistan by destroying the institutions of the past decades.”

It remains unclear, though, how the Taliban can resolve the contradiction between its doctrinaire positions restricting women’s rights and political pluralism with the standards on which any U.S. administration and Congress will condition development aid.

Among other things, Mr. Biden’s newly confirmed head of the United States Agency for International Development, Samantha Power, is one of the administration’s most prominent human rights advocates.

“America doesn’t shovel out aid unconditionally,” Mr. Malinowski said. “Most American aid is designed to help governments do the very things that the Taliban despises.”

The Taliban were presented with such choices when they controlled much of Afghanistan in the 1990s. For several years in a row, the group sent delegations to United Nations headquarters seeking recognition there, to no avail.

A desire for recognition and assistance was not enough, however, to make the group heed the United States’ demand that it hand over Qaeda’s leader, Osama bin Laden, a stance that ultimately led to Afghanistan’s invasion after the Sept. 11 attacks.

“I think the Afghans deserve more than just being told, well, the Taliban better not do this,” said Christine Fair, a professor at Georgetown University’s Edmund A. Walsh School of Foreign Service and who has studied Afghanistan for years. “They’re really clear that they want to roll back the rights of women. And they don’t want to contest elections. They believe that they should be given a piece of the government because they have killing power.”

Ms. Fair added that the Biden administration should be placing more focus on the role of neighboring Pakistan, which has long had great influence over the Taliban.

H.R. McMaster, a retired three-star general who served as national security adviser during the Trump administration, said it was “delusional” to believe that the Taliban had fundamentally changed in 20 years, and dismissed the idea that the group was seeking greater international acceptance.

It is false, he said, to think “there is a bold line between the Taliban and Al Qaeda,” he said on Monday during a discussion for the Belfer Center at Harvard’s Kennedy School of Government in which he roundly criticized Mr. Biden’s decision.

“They have said that their first step is to reestablish the Islamic Emirate of Afghanistan,” he said. If that were to happen, it would be “a humanitarian catastrophe of a colossal scale.”

Mr. Eggers said that the reality could be more nuanced, and one that could confound American policymakers.

“For example, what if Afghanistan ends up being about as bad as the Saudis with regard to their treatment of women?” he said. “That’s not good enough, but what do we do then?”