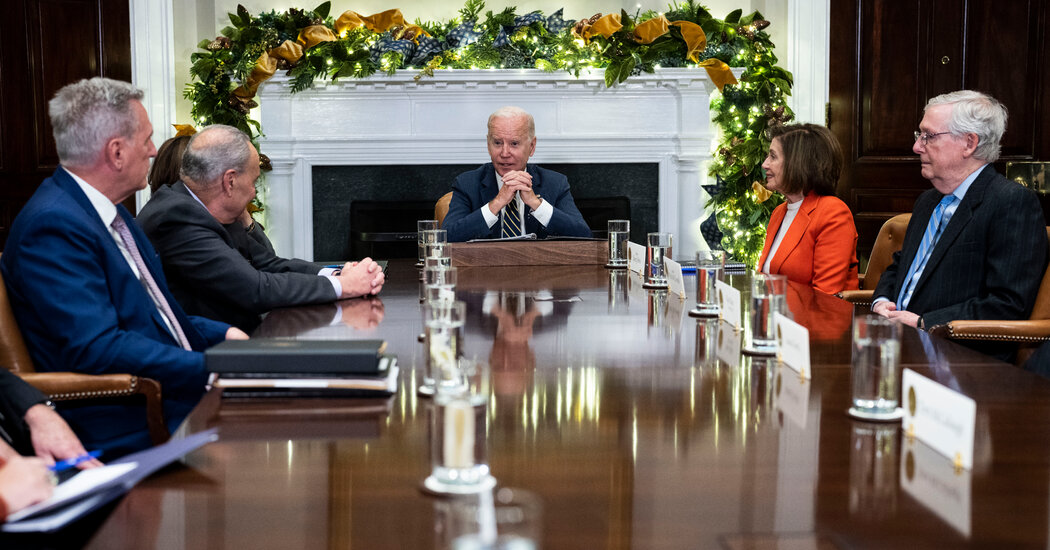 President Biden told lawmakers that the U.S. economy would be “at risk” if rail workers went on strike next month.

WASHINGTON — President Biden told congressional leaders from both parties on Tuesday morning that they must act to prevent a nationwide rail strike, saying that doing so was “not an easy call” but was necessary because the economy would be “at risk” if the trains shut down as a result of a work stoppage.

Meeting with the top Democratic and Republican lawmakers in the House and Senate, Mr. Biden told reporters he was “confident” that Congress could reach a solution that would prevent a strike.

Mr. Biden’s comments came as he met with the lawmakers to discuss a range of issues facing them in the coming days, including funding the government, providing support for Ukraine and protecting same-sex marriage.

In a brief statement, the White House said Mr. Biden had summoned the leaders to a meeting in the Roosevelt Room “to discuss legislative priorities through the end of 2022.”

Mr. Biden and his Democratic allies on Capitol Hill are hoping to make the most of the next few weeks, while the party still controls both chambers of Congress. When the new Congress begins early next year, Republicans will have a slim majority in the House, giving them control over the agenda there.

Here’s where the president stands after the midterm elections.

On Monday night, Mr. Biden urged lawmakers to swiftly pass legislation that would prevent a labor stoppage by rail workers next month, saying that such a move could have devastating effects on the nation’s economy.

“Congress has the power to adopt the agreement and prevent a shutdown,” the president said in a statement. “It should set aside politics and partisan division and deliver for the American people. Congress should get this bill to my desk well in advance of Dec. 9 so we can avoid disruption.”

Mr. Biden’s call for Congress to act underscores the recognition that a rail strike could have a devastating effect on the fragile economic recovery after the coronavirus pandemic. Frozen train lines would snap supply chains for commodities like lumber, coal and chemicals and delay deliveries of automobiles and other consumer goods, driving up prices even further.

Speaker Nancy Pelosi said on Monday night that the House would vote on the matter this week, ahead of a strike deadline set for early December. It is not clear what will happen in the Senate, where Democrats have 50 seats in the 100-member chamber and most bills require Republican support to pass.

The president is a staunch union backer who has previously argued against congressional intervention in railway labor disputes, arguing that it unfairly interferes with union bargaining efforts. In 1992, he was one of only six senators to vote against legislation that ended another bitter strike by rail workers.

The decision to embrace congressional action as a solution to the labor dispute is a gamble that threatens to anger some of his biggest supporters in the labor community.

Though many members are likely to be upset by the prospect of congressional intervention, some union leaders may quietly prefer that intervention to come in December rather than in January, when the House comes under Republican control and may be more likely to back the skimpier deal.

Congress has the authority to intervene in a variety of ways. It could push back a strike deadline and extend the negotiating period, or require the two sides to involve an arbitrator. It could also enact a deal directly through legislation — whether it was the agreement that some unions already have voted down, or a less generous proposal that a presidential board issued over the summer.

The agreement voted down by several rail unions would raise wages by nearly 25 percent between 2020, when the last contract expired, and 2024. But it has proved contentious among rail workers who argue that it does not go far enough to resolve what they say are punishing schedules that upend their personal lives and their health.

The American Trucking Associations, an industry group, recently estimated that relying on trucks to work around a rail stoppage would require more than 450,000 additional vehicles — a practical impossibility given the shortage of equipment and drivers.

The railroad industry immediately threw its support behind Mr. Biden’s call for legislation.

“No one benefits from a rail work stoppage — not our customers, not rail employees and not the American economy,” Ian Jefferies, the chief executive of the Association of American Railroads, which represents major carriers, said in a statement. “Now is the appropriate time for Congress to pass legislation.”

Four of the 12 unions representing more than 100,000 employees at large freight rail carriers have voted down the tentative agreement that the Biden administration helped broker in September.

Some workers have long suspected that Congress would intervene rather than allow them to strike, a suspicion that Mr. Biden’s labor secretary, Martin J. Walsh, heightened during an interview with CNN this month, when he said Congress would have to take action if the two sides could not reach a deal on their own. It was unclear whether Mr. Walsh was speaking hypothetically or urging intervention.

Later on Tuesday, the Senate is also scheduled to vote on legislation to provide federal protections for same-sex marriages. If the bill passes, the House will still have to vote on it before the end of the current Congress and send it to Mr. Biden’s desk for his signature.