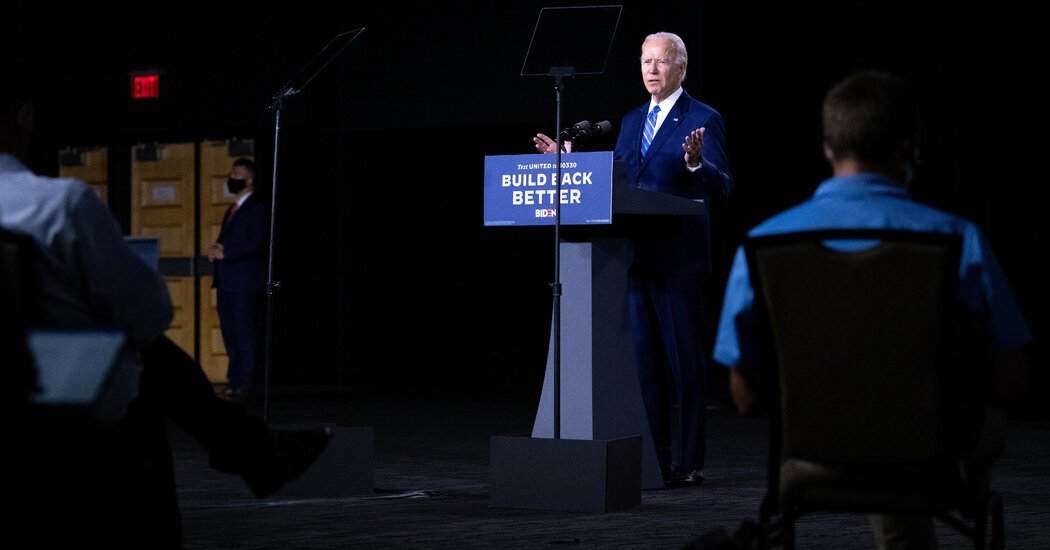 WILMINGTON, Del. — Joseph R. Biden Jr. has told allies that he has interviewed every finalist in his vice-presidential search, and his advisers are planning an announcement for the middle of the week, people briefed on the selection process said on Monday.

In a sign that the choice is now in Mr. Biden’s hands alone, the four-member committee that screened his potential running mates is said to have effectively disbanded — its work is complete, Biden allies said, and there is little left to do except for Mr. Biden to make up his mind.

Mr. Biden’s political team has prepared rollout plans for several of the finalists, and he is expected to announce his decision as soon as Tuesday, though more Democrats expect it to come on Wednesday. The former vice president, however, has not been known for his punctuality so far in the presidential race and the timeline could well slip again.

Mr. Biden has spoken with the vice-presidential candidates through a combination of in-person sessions and remote meetings over the last few weeks, but the exact timing and circumstances of all of the meetings are not clear. Close advisers to Mr. Biden said he had been directly in touch with all of the leading candidates.

Some of the strongest contenders have been Senator Kamala Harris of California; Susan Rice, the former national security adviser; Senator Elizabeth Warren of Massachusetts; and Gov. Gretchen Whitmer of Michigan, who met with Mr. Biden on Aug. 2. Mr. Biden and his team have also closely considered Senator Tammy Duckworth of Illinois, Gov. Michelle Lujan Grisham of New Mexico and Representatives Karen Bass of California and Val Demings of Florida.

All of them were interviewed by Mr. Biden’s search team, a panel of advisers and party luminaries informally led by former Senator Christopher J. Dodd of Connecticut.

The final days of the search, like everything else in this race, have been shaped by the coronavirus. While some of the conversations have been in person, others have taken place over the phone, according to Democrats familiar with the process.

Mr. Biden spent time this weekend in Rehoboth Beach, Del., where his family has a beach house, and on Monday addressed a virtual fund-raiser with Muslim American leaders from his Wilmington home, located in a verdant neighborhood that showed signs of recent storm damage. He was not, however, asked about his vice-presidential selection, according to a news media pool report from the event.

A spokesman for the Biden campaign declined to comment on this article.

The campaign accelerated its vice-presidential planning this weekend, preparing outreach efforts to help the future running mate connect with core Democratic constituencies and readying fund-raisers around her selection. Mr. Biden’s campaign has sent emails and texts urging supporters to sign up for “the first grass-roots fund-raiser with the next President and Vice President of the United States,” and there is a “virtual event introducing our running mate” planned, sponsored by Women for Biden.

“They have no idea who it’s going to be,” Representative Filemon Vela, Democrat of Texas, said of the campaign staff members who are readying a rollout. “But they are making all the preparations necessary so that when the announcement is made, they can do what they are supposed to do in terms of rolling it all out.”

There is great uncertainty around Mr. Biden’s ultimate decision, even among prominent party leaders and those who have known him for years.

“This is like the best-kept secret in the universe,” said former Senator Barbara Boxer, Democrat of California, who served with Mr. Biden in the Senate. “We’re all anxious so we can get this behind us and get on that trail.”

As closely held as Mr. Biden’s potential decision has been, he has been exceptionally open about his search criteria, signaling that he intends to put particular emphasis on personal rapport and confidence in the candidates’ governing capabilities.

“He’s looking at everything,” Representative Cedric Richmond, Democrat of Louisiana and a co-chair of Mr. Biden’s campaign, said in an interview last week. “Who he’s most comfortable with, who helps him win. There’s a lot that goes into it. He’s going through his thought process.”

One central question for many Democrats is whether Mr. Biden will choose a woman of color as his running mate. He has considered Black, Latina and Asian-American contenders, as well as white candidates.

While Ms. Whitmer is white, some of her enthusiasts have noted that if Michigan’s lieutenant governor, Garlin Gilchrist II, were to replace her, he would become the only Black governor in America — and in a pivotal battleground state where Hillary Clinton lost in 2016 in part because of mediocre African-American turnout.

But amid the national outcry over racism and police violence after the killing of George Floyd, Mr. Biden faced increasingly urgent calls this summer to select a Black woman.

For months, he and his campaign have heard from strategists and activists who have made the case for an African-American vice-presidential choice. Polling has shown that many voters give Mr. Biden broad political leeway to make his selection. But a number of party strategists have argued that selecting a Black running mate would energize voters, and reflect the central role Black women have played in the Democratic Party and in reviving Mr. Biden’s once-flailing candidacy during the primary.

“Black women have become excited about the possibility, and have a serious sense that the vice president’s success thus far would not have been possible without their investment, their confidence in him,” said Leah D. Daughtry, a veteran party strategist who has spoken with Mr. Biden and his team about selecting a Black vice-presidential candidate. “The majority of the finalists are African-American. The campaign would have a lot of work to do to explain to people why none of these women were picked. That’s going to be a tall order. A big book of business.”

Clay Middleton, a Democratic National Committee member from South Carolina and former adviser to the presidential campaign of Senator Cory Booker of New Jersey, acknowledged that whatever Mr. Biden’s choice, some Democratic voters may feel let down — whether he picks a white candidate or a candidate of color, a moderate or a progressive or someone who is simply less well-known.

“People are going to be upset regardless — the issue is, how will it be rolled out, and how comfortable is the vice president and his nominee?” Mr. Middleton said. “Because that image, it has to be genuine.”