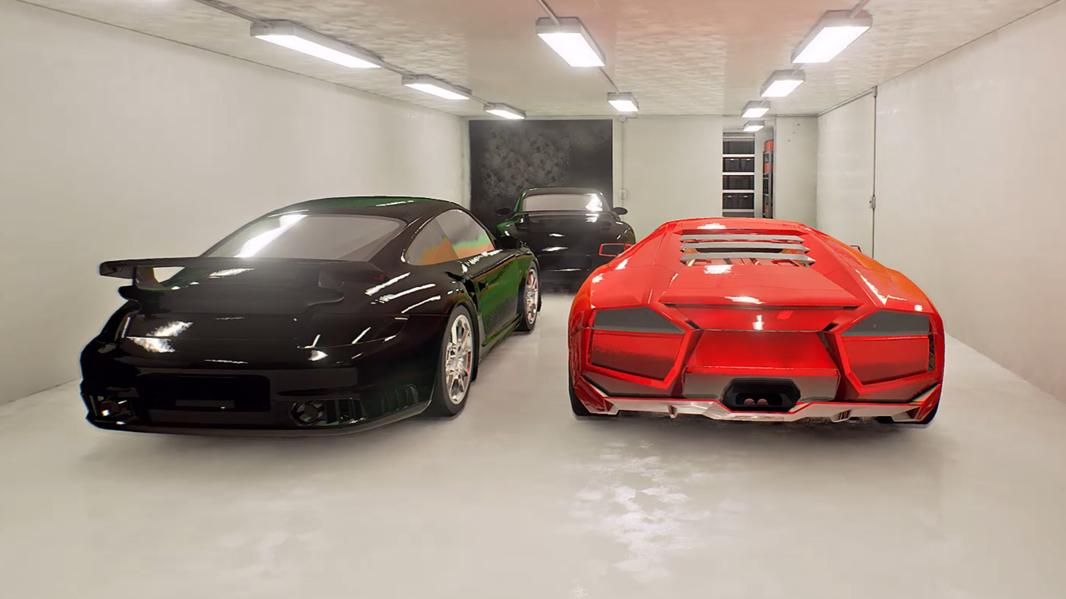 They are among the most famous names in the world, from tech billionaires and celebrities to doctors and lawyers, and countless corporate titans. All of them have one thing in common: outrageous underground bunkers with luxury amenities, including swimming pools, bowling alleys, and gun ranges.

Considering the current world crisis due to the coronavirus pandemic, bunker owners are at code red in preparing their families for at least six months in their bunkers. They are not worried about nuclear wars or asteroid hits at the moment; they are primarily concerned about civil unrest.

For the last five years, these bunker owners built their luxurious shelters with one goal—to protect their families. Some have safe rooms with escape hatches leading through a tunnel to their bunkers, while many others have underground bunkers hidden on their extensive land holdings, away from their main residence. 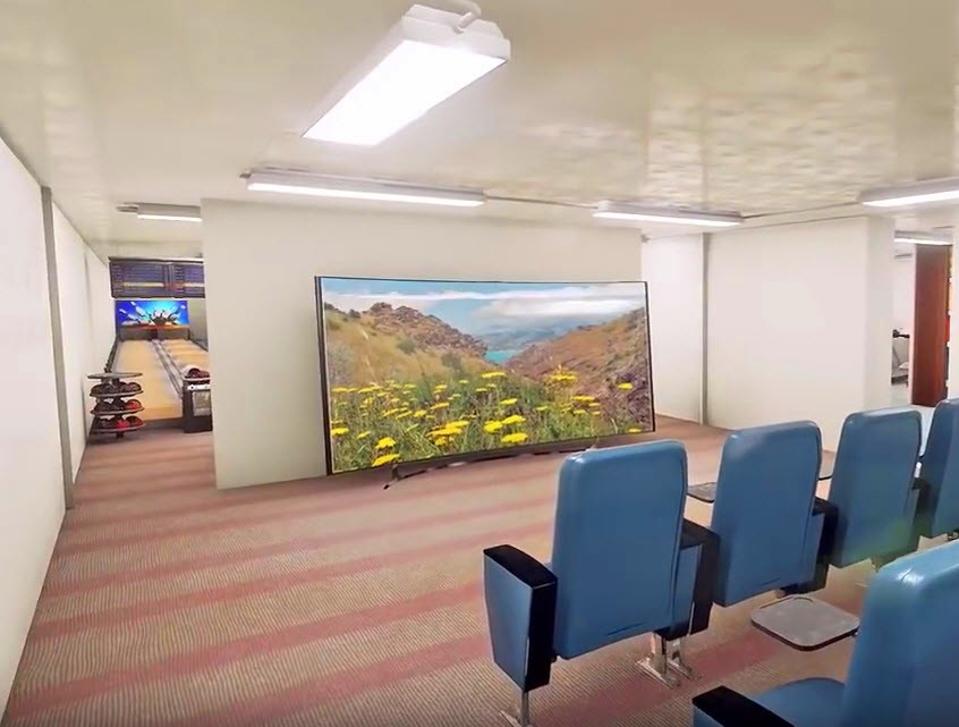 That’s Entertainment: The screening room and bowling alley in the Aristocrat Bunker.

I spoke with one of the leaders in the industry, Gary Lynch, at Rising S Bunkers, a Texas company that specializes in underground bunkers and services. Business is booming, he says, with over 2,000% more inquiries from possible buyers worried about their future. 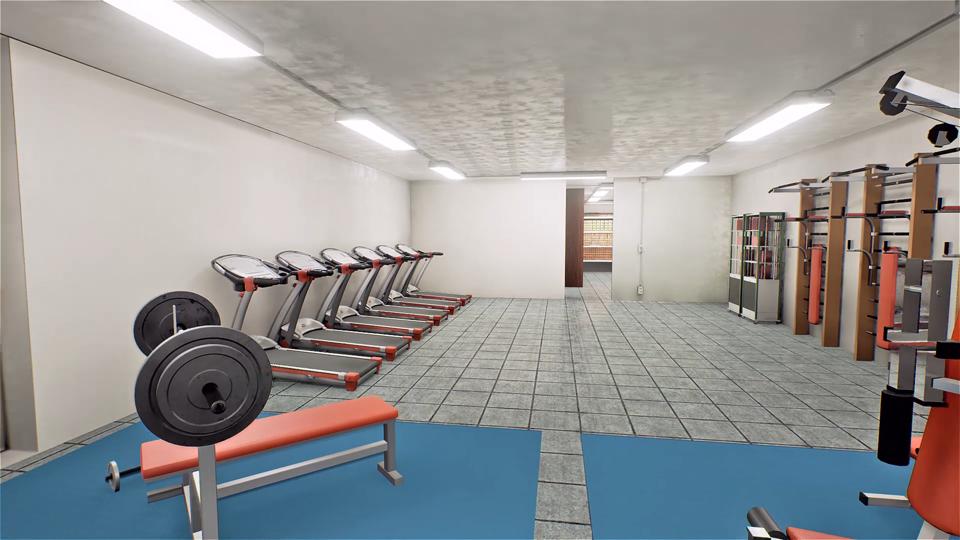 Fit for Disaster: A massive gym in bunker.

“Sadly, the need for an underground bunker has once again risen,” says Lynch. “While we specialize in building these types of products I would much rather build something else, but because we truly believe in the need for them, we won’t as long as there is a market. We could literally build anything because we are a fabrication facility, but because we have a high standard for quality and see the same issues that our clients see, we are the best in this business. The most requested shelter would be a toss-up between our three 10” x 50” SilverLeaf models—these are by far the most popular of them all, and you don’t have to be a millionaire to buy one.”

He continues, “Our buyers are looking for protection from one thing as a majority. No matter what happens in this country whether it be a war on our homeland, a catastrophic earthquake like the New Madrid quake of the 1800s, a pandemic such as this one, we are on the brink of social/civil collapse, and that is the real threat we all face.”

Into the Pool: The game room in the Aristocrat Bunker.

One of Rising S Bunkers’ wealthy clients filled me in what life is like as an owner of a luxury bunker. Terry is 45 years old with three children and lives on an expansive property in Ohio. He has owned his underground bunker for three years now and is nervously counting down the hours until he feels the need to shelter his family.

The 1,500-square-foot bunker is not located underneath his estate but is at a nearby location on the property. The obscure building above the bunker features an escape hatch below to its expansive 3 bedrooms, two bath space. With two master bedrooms, a kid’s room, and two bathrooms, the space is larger than many homes.

“I was never worried about nuclear war when I decided to build a bunker,” says Terry, “I was more concerned about civil unrest, and now we see the possibility of what we had always planned for. It’s a whole different story when people are fighting over food and toilet paper. I don’t think it is the virus that will destroy the world; I think it is what comes after.”

Creating a comfortable bunker for his family was a priority to have an escape that will protect them up to six months at a time. “We have three kids, and we wanted room for them and for my parents to be able to stay there. We totally customized our bunker with Rising S. We have three bedrooms, two master bedrooms, one bedroom for kids, a massive family room, an office, a storage room, a kitchen, and a gun room.” 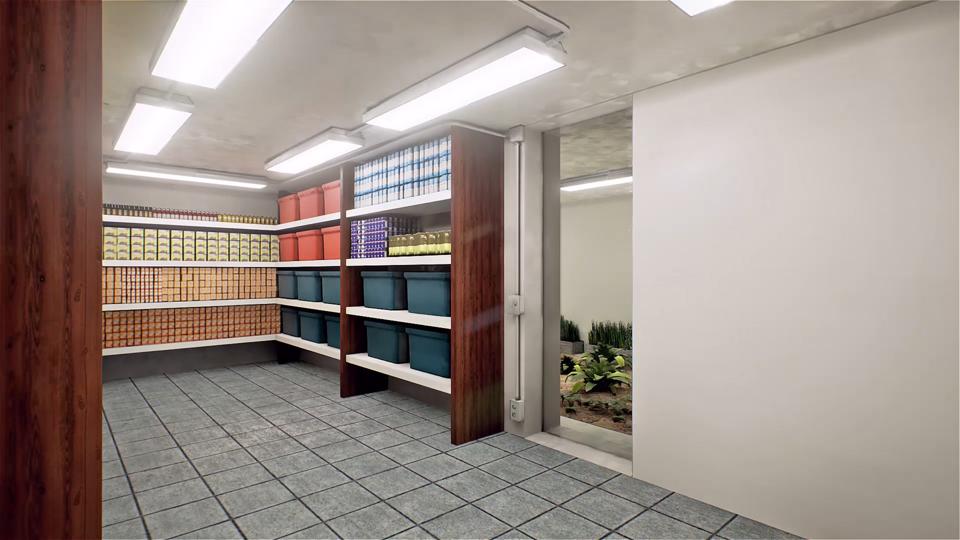 Eating In: There are separate food storage areas with multiple vegetable gardens.

The family has used the bunker for overnight stays as a dress rehearsal. “The kids love it because it’s large and a place to explore. We have hidden solar power in case the grid goes out. We have Internet underground cable running into it, so it’s like a home away from home.”

“We have hidden cameras around the property for surveillance and have rehearsed an escape plan to the bunker,” Terry says. “We have weapons but only as a last resort.”

And how do you stock a bunker adequately for survival underground? “We converted one of the rooms into storage,” Terry says. “We have enough food and water to last exactly six months. We do a lot of our own canning and have a lot of beans and rice and put them in Mylar bags. It’s a lot cheaper than buying pre-made products, and you can make a lot more of it on your own. And it tastes better because you include your own seasoning packets.” 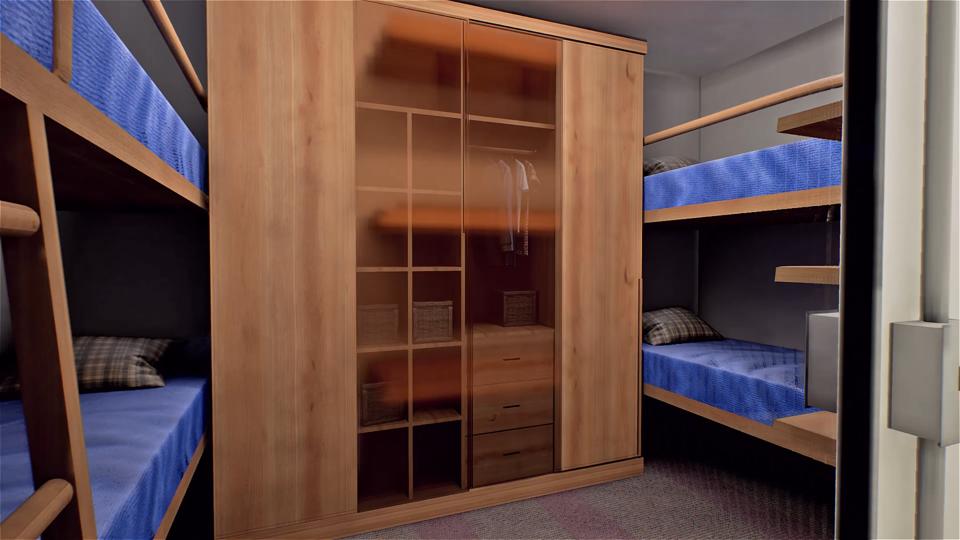 And how do you keep a large family entertained for six months? “I have seven large boxes of Blu-Ray movies,” he says, “tons of board games, and of course, until the internet goes down, we have Xbox, Nintendo Switch, and tablets. That will help with online and offline schooling.”

As far as security, should civil unrest become widespread, Terry has that planned out as well. “We have weapons but only as a last resort. We have 15 hidden cameras around the property for surveillance, and have rehearsed an escape plan to the bunker that will take 25 minutes to be locked in.” 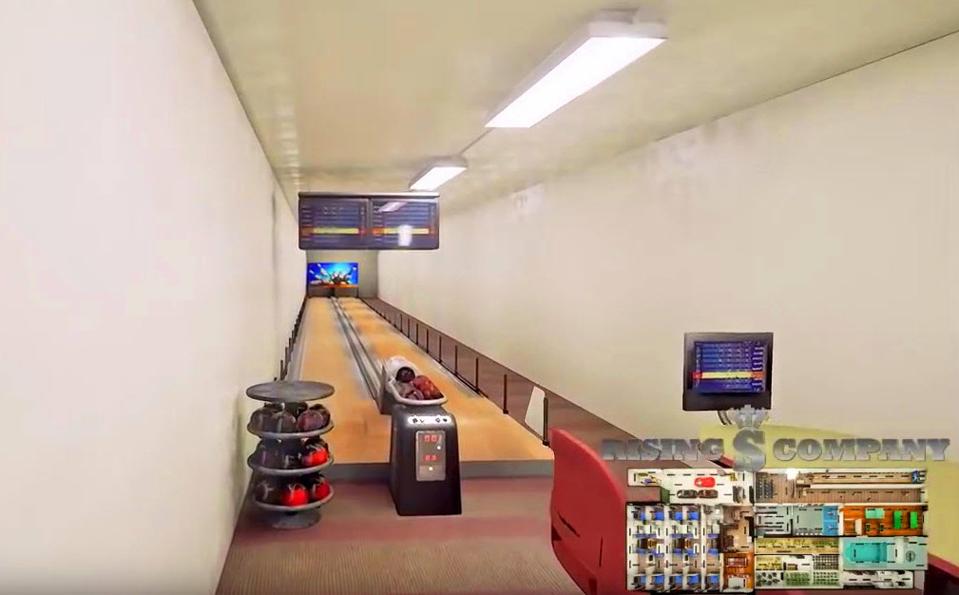 Low Rollers: The bowling alley in the Aristocrat bunker.

All in, Terry admits he has spent over $1 million for his concrete reinforced steel walled bunker located six feet underground. Decorating is a completely different problem with the solid walls, and he uses a lot of magnets to hang the decor.

Rising S Bunkers offers up a wide range of bunker options for buyers at all different budgets, ranging from just under $40,000 to the low millions. Top of the line is the “Aristocrat” for $8.35 million. The space fits 50 people, and comes with game rooms, a sauna, gym, media room, bowling alley, gun range, and a swimming pool. In addition to those features, the massive bunker also has custom flooring and carpet, a custom kitchen, multi-vehicle garage with motor-cave, greenhouse for sustainable food sources, and large storage rooms. These units are also equipped with full plumbing/septic systems and wired for dual power allowing the bunker complex can run on or off “the grid.” 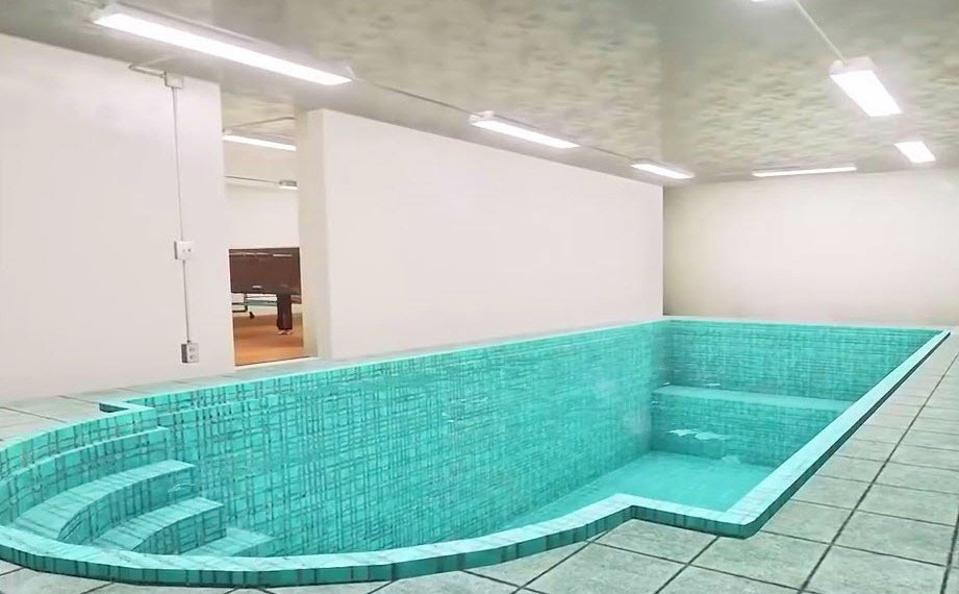 Taking the Plunge: The swimming pool in the Aristocrat bunker

The bunker also comes with an above-ground safe house near the entrance. The structure looks like an ordinary building to the eye, but behind its sheet metal walls are bullet-resistant walls made of 1/2″ plate steel. And behind the standard shop door there is a heavy blast door. This door is double-lined in 1/2″ plate steel, and it is equipped with a 2-foot plate dead-bolt locking system.

Once you are inside the safe house, it offers one more layer of protection for the bunker entrance. The bunker’s hatch lies behind a false wall. This false wall is made from 1/4″ plate steel (like all of the other interior walls), and its dual purpose is undetectable to the naked eye. This wall will open to the bunker entrance once you release the hidden locking mechanism. Once you are inside the hidden “hatch-room,” the door can be locked from the inside as well using two sliding dead-bolts.” 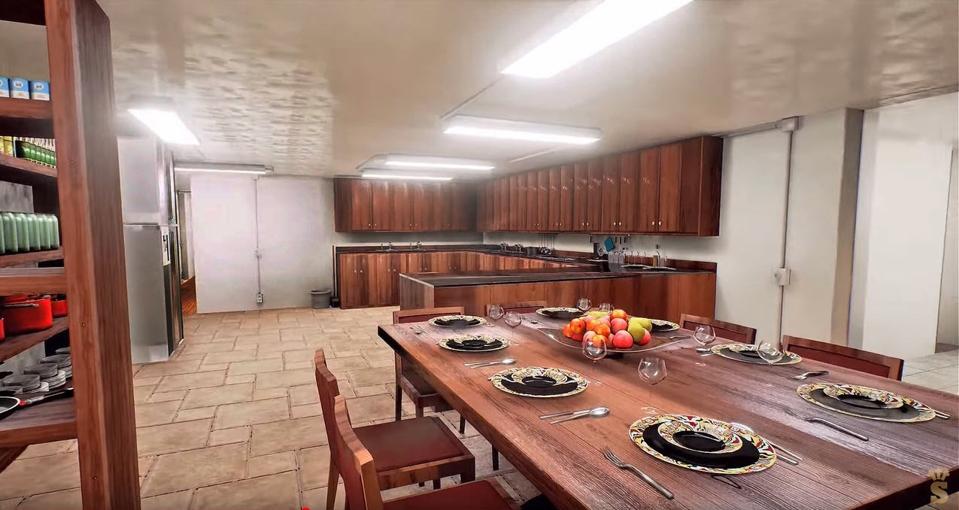 Dinner Is Served: The large kitchen and dining area in the Presidential Bunker. 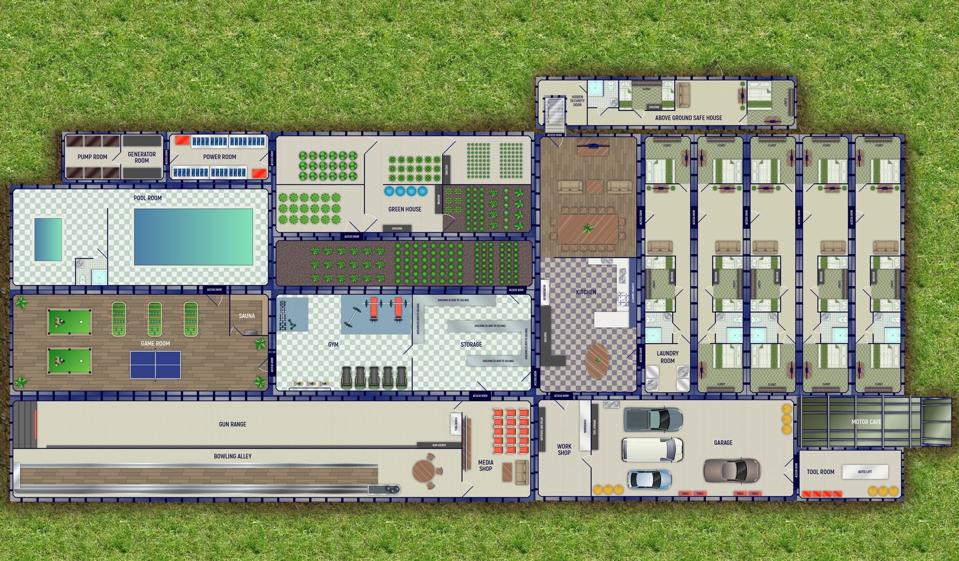 Ready for Anything: The layout of the Aristocrat Bunker.

More affordable bunkers in the collection include “The General” for $1.59 million, “The Fortress” for $1 million, and others starting at $58,000 for a 10” x 20” shelter, each putting an actual price on longterm safety and security.