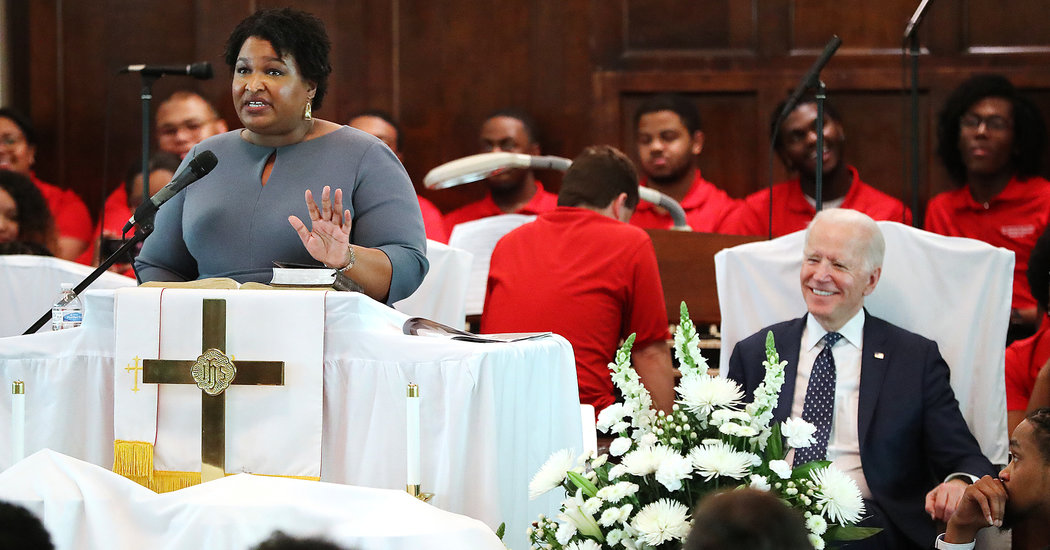 Four years ago, Senator Cory Booker of New Jersey made his vice-presidential pitch to Hillary Clinton at her Washington home, months before she faced Donald J. Trump in the November election.

Mr. Booker, the only African-American to make Mrs. Clinton’s shortlist, argued that the presence of a black running mate would motivate black voters, helping Mrs. Clinton recreate the coalition that backed former President Barack Obama in 2008 and 2012.

But Mrs. Clinton had won the Democratic nomination with substantial black support, and some of her advisers argued that many black voters would already be energized by Mr. Trump’s divisive candidacy and appeals to white conservatives, according to several people involved in the selection. After weighing the strengths and weaknesses of Mr. Booker, among others, she chose Senator Tim Kaine of Virginia, a white moderate widely seen as a safe, traditional pick.

“Kaine brought good and solid credentials,” said Minyon Moore, a key adviser to Mrs. Clinton who participated in the selection process. “But the difference between a Cory and Tim Kaine could’ve closed the enthusiasm gap. Looking back on it, it’s fair for people to ask if we should’ve factored enthusiasm more into it.”

No two presidential cycles are completely analogous, but as former Vice President Joseph R. Biden Jr. begins his search for a running mate, Mrs. Clinton’s loss and the weaker-than-expected black turnout in 2016 are on the minds of top Democrats. Mr. Biden has already committed to selecting a woman, and he and his allies have repeatedly mentioned two black women as possibilities — Senator Kamala Harris of California and Stacey Abrams, the party’s 2018 nominee for governor of Georgia — as well as several white women, particularly Senator Amy Klobuchar of Minnesota and Gov. Gretchen Whitmer of Michigan.

Pressure has been growing on Mr. Biden to choose a black woman to inspire black turnout this fall and not take it for granted. The Rev. Al Sharpton, for instance, who speaks to Mr. Biden regularly, is to announce his support for Ms. Abrams as vice president as soon as next week, according to those familiar with his plans.

Yet Mr. Biden is facing other factors and pressures as well. He has said he wants someone who is prepared to step into the vice presidency immediately, a nod to the value he puts on government and leadership experience. He would be the oldest president ever, 78 on Inauguration Day, and is looking for a partner and, possibly, a potential successor. With the country deep into the coronavirus pandemic, voters will also assess whether his running mate appears capable of handling the worst national crisis since World War II.

Ms. Harris, who has statewide and national experience, is seen in the Biden camp as a more likely pick than Ms. Abrams, who was a state legislative leader for a decade before losing her bid for governor. Still, some Democrats believe that choosing a hands-on governor or veteran senator is a better fit for the crisis than Ms. Harris, who was attorney general of California and has been in the Senate for three years.

Mr. Biden’s selection has also become a vehicle for a broader debate among Democrats about the best strategy to win back the White House. While candidates like Ms. Harris or Ms. Abrams could energize core Democratic constituencies such as black voters or younger voters, as well as women, Ms. Whitmer and Ms. Klobuchar could be a geographic plus, considering they hail from the Upper Midwest region important to the Electoral College.

Among some black leaders and activists close to Mr. Biden, including Representative Jim Clyburn of South Carolina and former Democratic Party chair Donna Brazile, a commitment to selecting a woman is not enough. They have publicly and privately pushed Mr. Biden to select a black woman, arguing black voter enthusiasm may hinge on it. .

“I’m rooting for everybody black,” said Leah Daughtry, the former chief executive of the Democratic National Convention, quoting the actress Issa Rae who used the phrase at the 2017 Emmys.

Mr. Sharpton, the civil rights activist and talk show host, said Mr. Biden “will get the overwhelming majority of the black vote, the question is turnout.”

“Now I’ve told him my preference is for a black woman, but you’ve got to also choose the right black woman,” Mr. Sharpton said in an interview. “In the middle of this pandemic, you have to choose someone that people, and particularly black people, believe can govern from day one.”

Ms. Abrams herself has been outspoken on the issue, taking the unusual route of publicly making the case for why Mr. Biden should choose her. She also said, during an interview this week on ABC’s “The View,” that she would have “concerns” if Mr. Biden didn’t choose a woman of color as his running mate.

“Women of color, particularly black women are the strongest part of the Democratic Party, the most loyal,” she said. “We need a ticket that reflects the diversity of America.”

There is no precedent for the selection of a black running mate. There is also little evidence that vice-presidential selections sway general elections in any meaningful way, including Mrs. Clinton’s selection of Mr. Kaine in 2016. Still, citing the dip in black turnout four years ago, and the importance of black urban centers such as Milwaukee, Philadelphia, Detroit, and Cleveland in the Electoral College, proponents like Mr. Sharpton argue that a black woman could help Mr. Biden.

In 2016, the black voter turnout rate in a presidential election declined for the first time in 20 years, it was seven percentage points lower than the record highs of Mr. Obama’s 2012 re-election. The black share of the electorate also slipped from 13 percent in 2012 to 12 percent in 2016, a difference of 1.5 million black voters, according to Ted Johnson, a senior fellow at the Brennan Center for Justice who studies how race affects voting behavior.

Aimee Allison, the founder of She The People, a political group aiming to increase participation from all women of color by three to five percentage points in the general election, said a survey of her organization’s members preferred Ms. Abrams, with Ms. Harris coming in second.

“Among black women primary voters, we saw Joe Biden was head and shoulders the pick,” Ms. Allison said. “But what we need to do now is expand across demographics to places where someone like Sanders showed strength — among Latinas in Texas and Nevada, and with Asian-Americans.”

But a preference for Ms. Abrams — or Ms. Harris — is far from a consensus opinion, with the jockeying wrapped up in part in personal histories and Washington power plays.

Speaker Nancy Pelosi has encouraged allies to float names of House members like Representatives Val Demings of Florida and Marcia Fudge of Ohio, according to people familiar with those conversations, in part to reward members of her caucus with a higher profile. Several leaders in the Congressional Black Caucus, an organization steeped in tradition, have preferred Ms. Harris, who is a member. Georgia politicians like Atlanta’s former mayor Kasim Reed and its current mayor, Keisha Lance Bottoms, who endorsed Mr. Biden early and is a top surrogate, are former political rivals of Ms. Abrams.

“There is a young lady right there in Georgia who I think would make a tremendous V.P. candidate, and that’s the mayor of Atlanta, Keisha Lance Bottoms,” he said in March.

Mr. Biden has been cautious about saying too much about his preferences. He said this week he expected to form a selection panel for his running mate by May 1 and has repeatedly said his top priority is a governing partner he can trust, someone with whom he is “simpatico.”

During an interview with local television in Pittsburgh this week, Mr. Biden said he would choose Michelle Obama as his running mate “in a heartbeat,” but thought she did not want to return to the White House. He largely pivoted away from a question about a black woman serving as his running mate, noting that he had already committed to nominating a black woman for the Supreme Court.

“I’ll commit to that be a woman because it is very important that my administration look like the public, look like the nation,” Mr. Biden said. “There will be a woman of color on the Supreme Court. That doesn’t mean there won’t be a vice president, as well.”

Recent state polls, including in Florida and Michigan, indicate that Mr. Biden begins the general election in a position of relative strength, with stronger support among older voters than Mrs. Clinton had in 2016 exit polls.

“He had a huge win on Super Tuesday, so what does that tell you about his support and what it’s about?” Ms. Palmieri said. “I would, like, not want to mess with that magic. That’s going to be your ticket into November,” she added, as opposed to “walking away from that and thinking, ‘OK, now we need some other kind of coalition.’”

In a national poll of black voters from The Washington Post and Ipsos earlier this year, just over a quarter said that in the event a white candidate won the nomination, it would be important for them to see a black person chosen as the running mate. Seventy-four percent of black Democratic voters said this would not be very important to them.

But Ms. Brazile, who is close to Mr. Biden, offered a warning. Given that several black women are qualified for the role, she said, Mr. Biden risks striking an unintended and problematic note about their fitness to serve if he goes in a different direction.

“Biden has street cred, but at the same time, it’s important to send a message — to send a signal and to brand the Democratic Party as a party of diversity,” she said. “And I think any other message will be read as rejection.”

“I know that sounds awful, but it’s true,” she said. “It will be seen as a rejection of viable black women.”