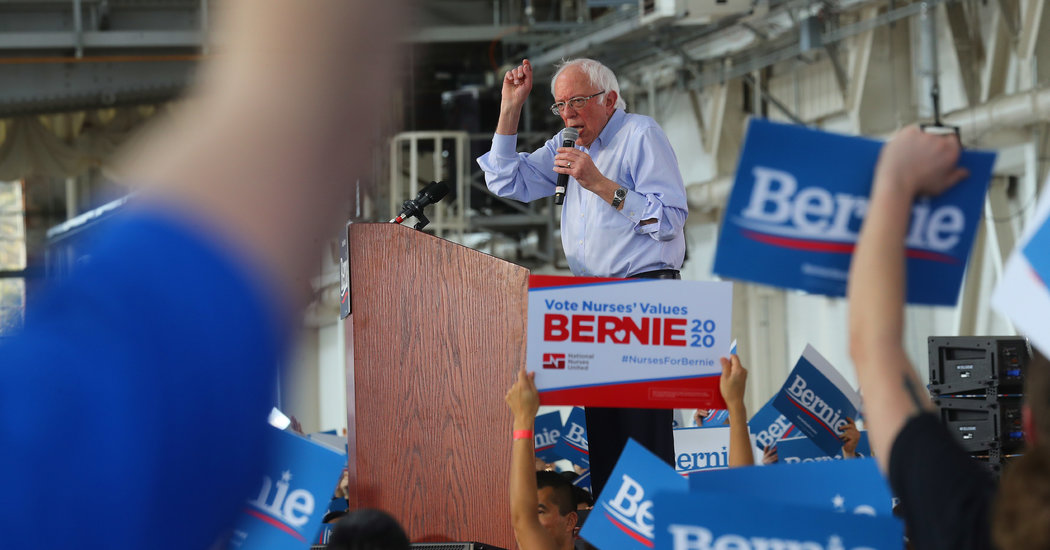 RENO, Nev. — Former Mayor Michael R. Bloomberg’s presidential campaign, which has largely focused its attacks on President Trump, on Monday mounted a frontal offensive against one of his Democratic rivals for the first time, comparing Senator Bernie Sanders’s campaign tactics with those employed by the president.

Mr. Sanders struck back at a campaign rally later in the afternoon, drawing comparisons between Mr. Bloomberg and Mr. Trump. But Mr. Bloomberg was not alone in targeting the Vermont liberal: Former Vice President Joseph R. Biden Jr., in a television interview, called on Mr. Sanders to disavow attacks by some of his supporters on officials at a Nevada labor union, behavior that Mr. Biden said was “Trump-like.”

The broadsides between the three Democratic candidates came as the field looked toward the caucuses on Saturday in Nevada, where early voting has already begun. Mr. Bloomberg, however, is skipping that contest, and Mr. Sanders’s rally was in California, which votes on Super Tuesday, March 3.

Mr. Biden, former Mayor Pete Buttigieg and Senator Elizabeth Warren held campaign events on Monday in Nevada, where they are trying to stop the political momentum of Mr. Sanders, who led a recent poll of likely caucusgoers.

Mr. Bloomberg’s campaign began the day by posting a video cataloging instances of online aggression and threats from Sanders supporters toward rival Democrats, then followed with a statement offering an unflattering comparison of Mr. Sanders and Mr. Trump.

“It’s a shameful turn of events to see Bernie Sanders and Donald Trump deploy the very same attacks and tactics against Mike, but the reason is clear,” said Kevin Sheekey, Mr. Bloomberg’s campaign manager. “At this point, the primary is Bernie’s to lose, and ours to win. Bernie knows this. Trump knows this. That’s why they are united in the campaign against Mike.”

But many of the candidates, including Mr. Sanders himself, while stopping short of calling Mr. Bloomberg himself a racist, have criticized his support as mayor of New York for stop-and-frisk policing — a tactic that disproportionately targeted black and Latino young men.

Mr. Sanders himself has been at the forefront of Democratic angst about Mr. Bloomberg’s candidacy. Campaigning in Richmond, Calif., on Monday, Mr. Sanders said both Mr. Bloomberg and Mr. Trump relied on their personal wealth to prop up their campaigns.

“It is not only a rigged economy, it is a corrupt political system,” Mr. Sanders said. “It is a system that allows billionaires like Trump to get massive amounts of campaign contributions from his millionaire friends. Mr. Bloomberg, like anybody else, has a right to run for president. He does not have a right to buy the presidency. Especially after being mayor of New York and having a racist stop-and-frisk policy, especially after opposing a raise in the minimum wage.”

Mr. Sanders’s Twitter account directly responded to the Bloomberg campaign statement, posting a photograph of Mr. Bloomberg and Mr. Trump at a golf outing in 2007.

Mr. Biden took aim at both Mr. Bloomberg and Mr. Sanders in an interview on MSNBC, suggesting that both candidates were just beginning to get the kind of scrutiny that Mr. Biden has received since entering the race.

Mr. Biden said that Mr. Bloomberg “can buy every ad he wants, but he can’t, in fact, wipe away his record,” citing the stop-and-frisk policing tactics as one example.

Mr. Biden jabbed Mr. Sanders over a number of subjects, including his votes in the 1990s against the Brady Bill, which required background checks for gun purchases, and his support of a 2005 bill that shielded gun manufacturers from liability lawsuits.

He argued that Mr. Sanders’s signature proposal, “Medicare for all,” was costly and lacked support in Congress, and questioned Mr. Sanders’s ability to defeat Mr. Trump, asking, “Is Bernie, a democratic socialist, a good guy, is he most likely to defeat Donald Trump?”

Mr. Biden also said that attacks by some of Mr. Sanders’s supporters on officials at the powerful Culinary Workers Union Local 226 were “Trump-like.” That union has declined to endorse a candidate in the race, but it opposes Mr. Sanders’s “Medicare for all” proposal.

One union official said she had received hundreds of messages from Sanders supporters with insults and threats; Mr. Sanders responded with a statement urging “supporters of all campaigns not to engage in bullying or ugly personal attacks.”

In the interview, Mr. Biden was pressed on whether Mr. Sanders was being Trump-like in his response to his supporters’ attacks. Mr. Biden did not directly answer, but said, “It’s something that worries me about being able to unify this country.”

Mr. Biden campaigned in Reno on Monday, and was scheduled to fly to Colorado to hold a fund-raiser in Denver on Monday night.

Ms. Warren has also criticized Mr. Bloomberg, telling supporters last week that he should not be the Democratic Party’s nominee because of remarks he made 12 years ago in which he said the end of a discriminatory housing practice had contributed to the 2008 financial crisis.

But while she has shown more willingness to chide her opponents more directly since her fourth-place finish in last week’s New Hampshire primary, her message is still largely free of the direct attacks that her rivals have embraced.

Her campaign has put a particular emphasis on courting Latino voters in Nevada, with whom aides believe she can outperform the candidates who leapfrogged her in Iowa and New Hampshire, including Mr. Buttigieg and Senator Amy Klobuchar. Her campaign on Monday also announced a “Latino Community Engagement Tour” in California.

Mr. Buttigieg campaigned in northern Nevada on Monday. At two events he was asked what he would do if he won the presidency but Mr. Trump refused to leave the White House.

“I guess if he’s willing to do chores, we could work something out,” Mr. Buttigieg said.

He followed up with a serious answer: The way to deprive Mr. Trump of the ability to claim electoral fraud, he said, is to win by a margin “beyond cheating distance.” He said he was “determined to build the broadest coalition,” a goal that has so far escaped him as he struggles, despite top finishes in the first two contests, to demonstrate support from nonwhite voters in polling of more diverse states like Nevada.

Mr. Sanders went up with two ads reinforcing a message he has driven throughout the 2020 campaign, that he stands for working people and against corruption in politics. In one, he promised to expand Social Security and guarantee health care for all while making “billionaires pay their fair share.” The second ad called Mr. Sanders’s climate change plan the only one bold enough to avert crisis.

Ms. Klobuchar, who stumbled in an interview with Telemundo last week when she could not name the president of Mexico, released a Spanish-language ad touting her ability to defeat Mr. Trump and her endorsement by The Las Vegas Sun (one shared with Mr. Biden).

Ms. Klobuchar, who campaigned at several stops in Nevada over the weekend, was holding a campaign fund-raiser Monday night in Los Angeles.

At his California rally, Mr. Sanders also took on his other critics in the party. “The Democratic establishment is getting nervous,” he said. “They say, ‘Oh, Bernie can’t win the election.’ Take a look at this crowd today.”

“What the establishment is trembling about right now — they are crying on television — what they are trembling in fear for is that working people are standing up demanding decent wages,” he added.

Mr. Sanders made his remarks at the former Ford Assembly Plant in Richmond, an automotive factory that was shuttered in 1955, to a crowd of more than 6,000 attendees. Thousands more crowded outside and watched through the building’s glass walls.

Mr. Sanders addressed the region’s housing crisis and high rates of homelessness. “It is a moral obscenity that in our country tonight, 500,000 people will sleep out on the streets,” he said. “Together we end that obscenity.”

As early voting sites opened in Las Vegas on Monday, Senator Jacky Rosen, Democrat of Nevada, joined a line of more than 50 people and waited to cast her vote. Ms. Rosen — who defeated a Republican incumbent in 2018 with the help of endorsements from Mr. Biden, Mr. Sanders and Ms. Warren — declined to indicate whom she favored.

“Every Democrat who’s running, they’re going to return decency, dignity, respect and civility to the White House,” Ms. Rosen said in an interview outside the culinary union, which is hosting an early voting site. “They’re going to have compassion with whatever health care plan they put forward, they’re going to worry about our environment and our future.”

“Any Democrat on that ticket, I’m going to get behind that nominee,” she added. “I’m voting uncommitted.”