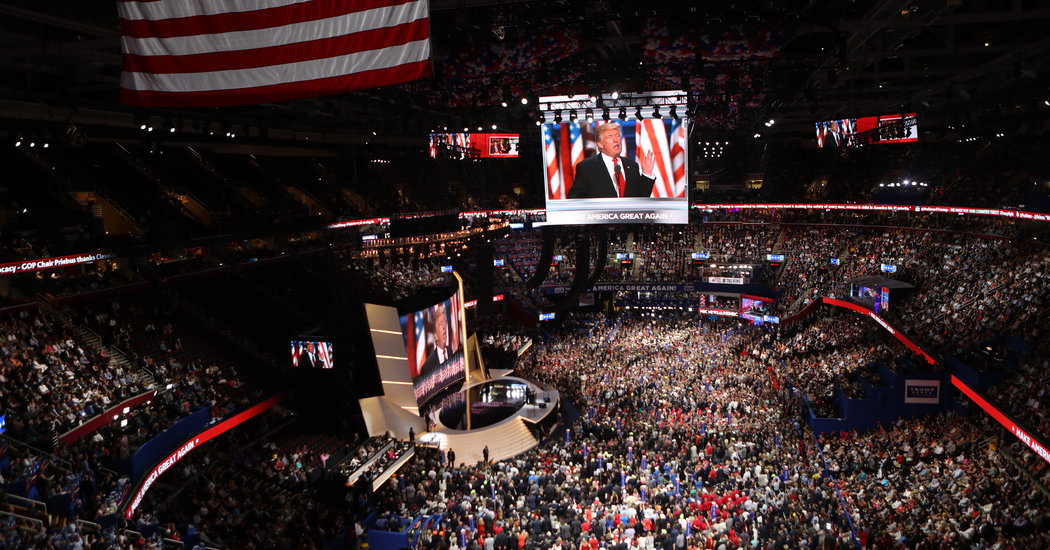 Political conventions have been a balloons-and-bunting mainstay of American campaigns since the Republican Party gathered in Baltimore to nominate Henry Clay for president in 1831. But this year, they may join the list of crowded events — concerts, baseball games, movies and Broadway shows — forced off the stage because of the coronavirus.

And it may not matter.

Some Democratic leaders are discussing replacing their convention with a virtual gathering, and some Republicans are unsure about holding the big spectacle that President Trump wants. Yet even before the pandemic, a more fundamental debate was playing out: Has the American political convention become a ritual holdover from another age?

For all the organizing, money, time and energy poured into a four-day extravaganza of parties, speeches, forums, lobbying and networking, there is a strong argument that they have become among the less consequential events on the political calendar.

Yes, candidates get their prime-time perch to speak to the nation. Party delegates debate obscure bylaws and approve a platform that is likely to be forgotten the moment the final gavel is dropped. The events can provide a lift in the polls, but there is no shortage of convention nominees, John McCain and Michael S. Dukakis among them, who can attest to just how ephemeral that boost is.

For all the talk of brokered conventions, it has been a long time since delegates had anything more to do than ratify a presidential candidate selected by primary voters and a running mate chosen by the nominee. As the drama has slipped away, so have the television networks, systematically cutting back on the hours of prime-time coverage devoted to events that have become little more than scripted advertisements.

The parties themselves have become far less influential, particularly since Mr. Trump overcame the Republican power structure to win the nomination in 2016. They have been weakened by rising anti-establishment beliefs on the left and the right, notably among younger voters, and by the sentiment that parties are not as essential to ideas or governing anymore. The waning significance of conventions, long the grandest symbol of old-guard party-building, would appear to be of a piece.

Terry McAuliffe, the former governor of Virginia who was the chairman of the 2000 Democratic convention in Los Angeles, likened the conventions to a high school reunion. “The party loves to get together,” he said. But Mr. McAuliffe said he was not particularly bothered by the possibility that Democrats would not hold a convention in person this year to nominate former Vice President Joseph R. Biden Jr.

“Listen, I’m a big lover of them,” Mr. McAuliffe said. “But if we don’t have one, it’s going to be just fine. The real goal is introducing Biden. There are a lot of creative ways to do it if we don’t have a convention.”

And in interviews with over a dozen emissaries and operatives from both parties, there was a strong view, especially among younger generations, that the value of conventions has flagged as the rules of politics have changed.

“Our political memories have become so short that we can barely remember Trump’s monthslong impeachment saga, let alone a weeklong infomercial for our party’s nominee,” said Zac Petkanas, an aide on Hillary Clinton’s presidential campaign in 2016. “The dirty little secret of politics is that 80 percent of what everyone thinks is important in campaigns doesn’t matter one little bit.”

He said that any obsession with conventions reflected a “1990s perspective” divorced from Trump-era news velocity.

Kevin Madden, who was a senior adviser to Mitt Romney, the Republican nominee for president in 2012, recalled that the party’s convention that year produced just one enduring scene: a curious, semi-scripted bit from the actor Clint Eastwood, who conversed onstage with an empty chair.

“They spend a year developing, it’ll take an hour to execute, and right afterward the effect will already be going through its life cycle,” Mr. Madden said of the modern convention, “and disappearing into another chaotic media environment.”

There is certainly a constituency for this kind of American tradition, particularly among political leaders who have spent a lifetime attending these quadrennial gatherings.

“I’m the old-fashioned guy here,” said Walter F. Mondale, the former Democratic vice president who was nominated to run for president at the party’s 1984 convention in San Francisco. “I have always liked political conventions: the consultations, the debates, the votes, the roll-calls and other things. I’ve lived with it my whole life and I’ve liked it.”

“I don’t know what the alternative is,” he said.

Jennifer Palmieri, who was a senior aide to President Barack Obama and to Mrs. Clinton, the Democratic candidate nominated to succeed him in 2016, said she had come to see the prime-time speeches from party nominees as meaningful moments, “not just for the candidate but for the country.”

“It’s the organizing principle for the campaign, a kickoff to the fall, a way for the ticket to present a comprehensive articulation of how they would govern,” she said of conventions.

“Despite the fact that we’re not selecting our nominees there anymore, they can act as a final stopgap if a nomination is in question, and it can go to the floor,” he said. “Those rules still exist. It just hasn’t happened for a long time.”

Mr. Dukakis, a former governor of Massachusetts, said he thought the 1988 Democratic convention where he was nominated had helped him — but not for long. “We were great coming out of it,” he said. “I think I had some pretty significant momentum coming out of it and kind of screwed it up. Is it helpful if it’s a successful convention? Yes, it’s a plus.”

Conventions have certainly provided memorable moments. The appearance of Mr. Obama, then a U.S. Senate candidate from Illinois, at the 2004 convention in Boston put him on a path to the White House. The 1984 “shining city upon a hill” speech by Mario M. Cuomo, the Democratic governor of New York, defined his legacy as much as anything he ever did as governor.

But those were hardly recent.

And if a principal purpose of conventions has been the projection of party unity after a fractious primary race, recent history has been checkered — and heavy on conspicuous booing.

In 2016, supporters of Mr. Trump jeered Senator Ted Cruz, the Texas Republican and his chief rival in the Republican primaries, who pointedly declined to endorse Mr. Trump from the convention stage, urging attendees to “vote your conscience” in November. On the Democratic side, delegates of Senator Bernie Sanders of Vermont repeatedly heckled party officials, admirers of Mrs. Clinton and even Mr. Sanders himself when he asked his supporters to back her.

Asked whether the Democratic convention was ultimately helpful to Mrs. Clinton, Leah Daughtry, the event’s chief executive, paused. “I think so,” she said. “When the balloons are dropping and the nominee is out onstage, there’s a certain amount of closure. Of course, there were those for whom that was not a satisfactory outcome. I don’t know that anything would have been a satisfactory outcome.”

Mindful of the loyal passion of Sanders voters, some Biden allies have wondered in recent weeks if a scaled-down virtual convention might at least deliver a silver lining: fewer opportunities for the Vermont senator’s supporters to register their disappointment in open view.

Of course, things could have been more complicated.

Gary W. Hart, the former Colorado senator who twice ran unsuccessfully for the Democratic presidential nomination, suggested the party was fortunate that the race had clarified itself — Mr. Biden took command in early March — before the pandemic upended the campaign.

“I don’t know how they would have done it,” Mr. Hart said of a socially distanced contested convention. “A big Zoom.”

Whatever Mr. Trump has in mind for this summer, party leaders have begun weighing the ramifications of a partisan convention divide: the possibility of a Republican convention in Charlotte, in person as planned, and a Democratic convention held remotely — consistent with a higher regard for public health warnings among Democrats.

For all that, the romantic attachment to conventions endures, a place for party members to reconnect with old friends or fight old fights, be quoted in their local newspapers or booked onto “This Week With George Stephanopoulos,” or just to feast on four days of open bars and buffet tables.

“I’m a fan of in-person conventions — I may be one of the few left,” said Barbara L. Boxer, a former California senator who said she had attended every Democratic convention since 1984. “Look, I like to go shopping in a retail store, too. What’s going to happen to that? When you get used to certain things, they have a certain place in your heart. It makes you feel certain things won’t change. It’s a good feeling.”

But John Del Cecato, a Democratic ad maker who worked for Pete Buttigieg, the former mayor of South Bend, Ind., in the 2020 primary race, said the days of action-packed, colorful conventions with big debates about ideas and candidates were long gone.

“Now it’s a heavily scripted, weeklong TV show that gives your nominee a short-lived bump in the polls, but doesn’t have a real impact on the November election,” he said. “But if we did away with them, we’d miss out on that obligatory moment in each presidential race where we pretend like there’s a real possibility of having a brokered convention.”